The Faculty Endowed Leadership Fund will: 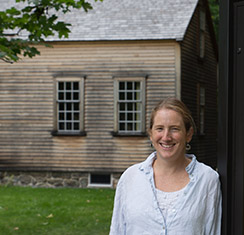 Just a mile from the CA campus, across from the Old North Bridge, stands an unassuming, wood-timbered farmhouse filled with little-known history. A mere 544 square feet, the Robbins House was home to three generations of free African Americans who lived in Concord while slavery was still legal in the United States. “These were free black people who were relatively successful and active in civil rights,” says history teacher Kim Frederick. “It’s not something we hear much about.” Next year, CA students will bring this invisible history to light — through fresh investigation into museum and town archives as well as a multimedia experience that will invite others to engage with their research.

This new interdisciplinary course, Concord’s Black History: A Multimedia Experience, will unfold in the 2017–18 spring semester, cotaught by Frederick and film teacher Justin Bull. It’s the first class supported by Department X, an initiative of the Faculty Leadership Endowed Fund, which was created to provide teachers and staff with resources to develop new curricula, exchange ideas across disciplines, and create and seize opportunities for experiential learning. This funding releases one-eighth of participating teachers’ time during a given semester to pursue a project that their colleagues have found promising.

During the 2015–16 school year, a Department X committee comprising teachers of visual arts, performing arts, English, science, and history met to create submission guidelines. A smaller review committee — to include Department X veterans in the future — considered eight submissions that represented the interests and ideas of 11 teachers, including topics such as remote sensing, symbolic economics, an intersectional approach to justice, and the connection between literary imagination and environmental science. As noted by the committee, Frederick and Bull’s “ambitious, thoughtfully written, and well-structured proposal” included a remarkable range of mission-driven ideas and approaches: an interdisciplinary, multimedia project that extends beyond CA’s campus to connect with both the history of Concord and the work of the Community and Equity Office.

Frederick had begun planning the course prior to Department X’s announcement. “I’ve been trying to change my classes into experiential classes that get students making or building something,” she says, citing the influence of CityTerm cofounder David Dunbar’s definition of authentic learning: When you construct knowledge yourself, you retain it; if you don’t author and own it, you lose it. Last year, she restructured a U.S. history course of hers called War and Propaganda in Early America: Lying and Dying. To examine King Philip’s War, students researched Concord residents from the period, digging through archives and producing a play as their final project. When they compared the town’s deed book against a map of 17th-century Concord, they gasped, realizing that two individuals in conflict lived on adjacent properties; one even had to walk through the other’s land to get to town. “Holding up those two primary sources, students saw with their own eyes how people must have moved around and how ill-defined property boundaries could have contributed to disputes,” Frederick says. “It got me thinking about what else I could do in this vein to help kids use evidence to consider motivation and to witness historical realities play out over time.”

For Concord’s Black History, Frederick will identify historical figures with enough supporting primary sources in the archives, and Bull will involve students in shaping the final project. The students will piece together the research themselves. “It’s more fun for them, because I don’t know the story,” Frederick says. “And that’s important. They’re figuring it out. That’s doing history.”

“One of my favorite ways to teach is to engage students through the lens of another discipline. The research they’ll be doing will tell exciting, untold stories.” 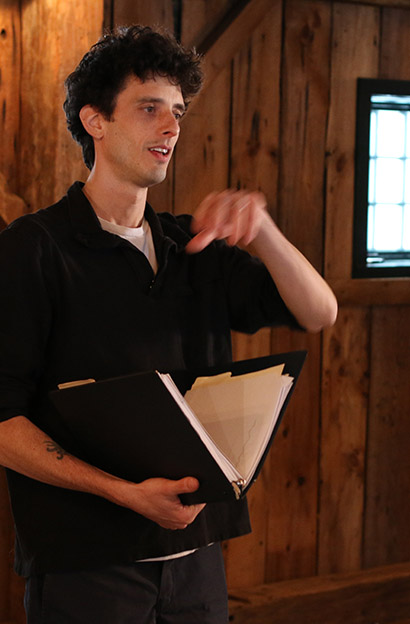 “I value actual, engaging projects for students to dig their minds into,” says Bull, who adds that he gets much of his energy for teaching from collaboration. “I hope that students will see, as always, that they are 100 percent capable of rising to a real-world challenge within a classroom setting. One of my favorite ways to teach is to engage students through the lens of another discipline. The research they’ll be doing will tell exciting, untold stories — and our film courses are always about storytelling. In the past, we’ve made movies. With this project, I’m excited about an interactive museum experience. This is going to push us to grow as a program outside of traditional film production.”

This spring, Frederick and Bull will write grant proposals to cover technology costs for the final project. Frederick will identify source materials and find actors. Bull will expand his knowledge of interactive web design and research how museum galleries are using media effectively. The Department X release of time — they’ll each teach three rather than four courses this spring — is critical to this process. “We’re getting time to plan, to do it well, and not just squeeze it in,” Frederick says. “This is such a cool opportunity for the students, and we want to make the most of it.”

She and Bull plan to share the multimedia outcome of the course with the museum for use as an interactive interpretive tool. “This is not only a wonderful opportunity for students to do real historical work, it’s also a way for CA to give back to the community,” Frederick says.

Read about the students’ projects and learn more at the Robbins House website.