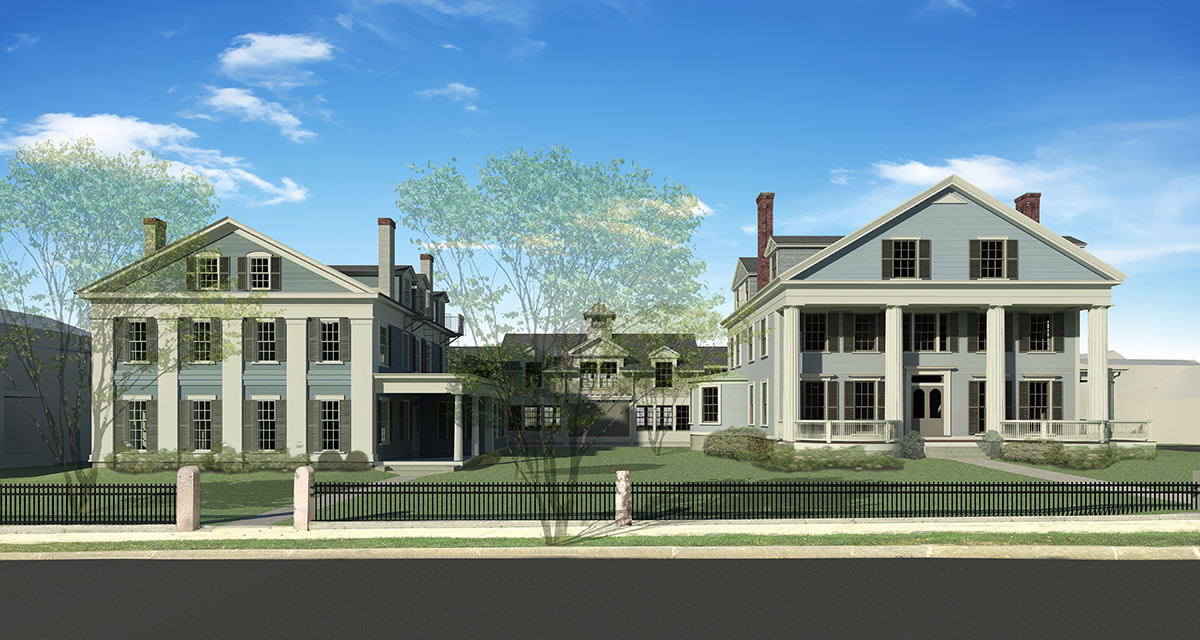 This summer, construction began on Haines-Hobson Commons, a renovation and expansion that will link Concord Academy’s Haines and Hobson student houses. When completed, this project will culminate the CA Houses campus improvement initiative that has been a priority of the Centennial Campaign for Concord Academy. The work completed on four of CA’s six student houses this summer and now begun in Haines and Hobson will benefit not only CA’s residential life program but also CA’s culture and community as a whole in lasting ways.

The campus-facing Haines-Hobson Commons will invite participation from the entire student body. This dividable, multipurpose common room will have a kitchen and space to accommodate the entire residential population of both houses for both formal events and informal living. With limited impact to existing structures, the addition will also create two much-needed additional faculty apartments suitable for housing families and increase the capacity of two existing house parent apartments.

Construction begun last year in Bradford House — creating a new accessible common room facing the quad and new faculty apartments — concluded this August. Adding that space allowed simultaneous renovations over the summer to reapportion student rooms and triple the size of the common rooms in Phelps, Wheeler, and Admadjaja. All of these common rooms have also been newly furnished. When Haines-Hobson Commons is finished in time for the 2019-20 school year, all of CA’s student houses will have common rooms with kitchens that are able to sustain CA’s thriving Residential Life program and provide flexible meeting space for student groups. The full set of floor plans can be viewed here.

Haines-Hobson Commons will complete the final phase of CA Houses renovations — reconfigurations and additions that are balancing the number of students per house, optimizing the scale and location of common rooms to accommodate all-house meetings, improving accessibility to the first floor of existing houses, and increasing the number of apartments on campus necessary to retaining CA’s outstanding faculty.

Concord Academy’s Colonial-era residential houses are the physical foundation for this school’s unique living and learning community. Following a thorough space utilization planning process, CA’s Board of Trustees approved the CA Houses plan including the renovations to Bradford House, the other common rooms, and Haines-Hobson Commons in October 2017. The CA Houses projects completed to date have been finished on or ahead of time and below budget.

The funding for these CA Houses improvements, as a part of the broader set of Centennial Campaign initiatives, was provided entirely by philanthropic support from the CA community, including contributions establishing endowed funds to maintain the buildings. Thanks to that generosity, CA is meeting pressing needs for space on campus and is poised to enter its second century strengthened and emboldened.