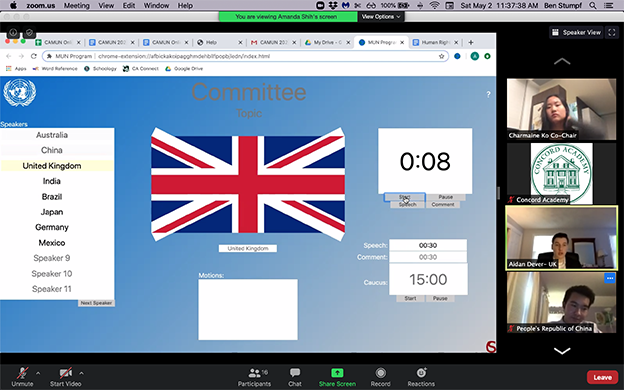 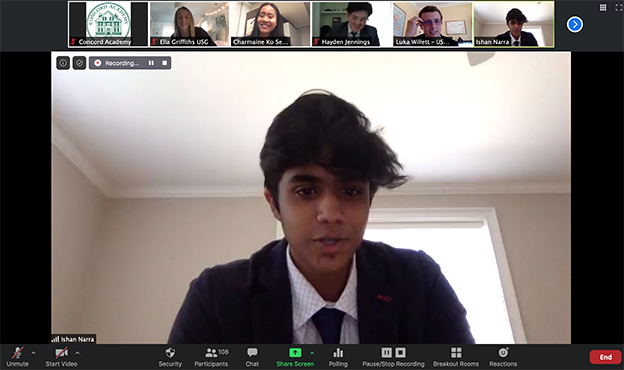 On Saturday, May 2, Concord Academy hosted the 16th annual Model United Nations conference, dubbed “Phoenix CAMUN” since it rose from the ashes of the canceled in-person conference originally slated for April 4. The conference took place from 10 a.m. to 1 p.m. EDT, using 19 Zoom rooms — that allowed for opening and closing ceremonies, plus six committee rooms, each with two caucus rooms for delegates to use as needed. Over 100 delegates from 18 schools attended, including Beaver Country Day School, Braintree High School, Catholic Memorial School, Duxbury High School, Seekonk High School, and Thayer Academy’s high and middle school, among others. Throughout its 16 year history, CAMUN has opened its doors to public and independent high schools and middle schools, and has tried to create a lively forum for diplomacy among new and experienced delegates.

The General Assembly committee discussed international cooperation in space, and included many new delegates from both middle and high school. The crisis committee on the death of Joseph Stalin posed an interesting challenge for delegates: With Stalin gone, how to secure your place at the top of the party? In the weeks before the conference began, the staff shared six- to eight-page background guides for each committee on CA’s website, which provided history, context, and important questions for each topic, and a set of instructions for using Zoom.

The conference began with a 15-minute opening ceremony, where Secretary-General Charmaine Ko ’20 introduced the idea of Phoenix CAMUN rising from the ashes, followed by a video introduction to the staff. Delegates then moved to their various committees using a slate of Zoom links, discussed their topics, wrote resolutions in Google Docs, presented them, and in some cases voted on them. Delegates then returned to the closing ceremony on Zoom, where each chair offered a brief recap of their committee, followed by a skit by the Crisis Committee in place of awards. Charmaine led the entire conference, and a series of weekly staff meetings, from her home.