Kim Williams P’08, ’14 didn’t set out to clear the way for women in business, but her tenacity and willingness to embrace the unexpected led to 26 years as a business leader in the still male-dominated field of investment management. “I have never thought of myself as a trailblazer or as a role model,” she said in the Davidson Lecture she delivered at Concord Academy on April 5, “but during my career it was not uncommon for me to walk into a room of 200 people and realize that I was the only woman.” In 2005, Williams retired as senior vice-president and partner of the Boston-based Wellington Management Company, at what many would consider the pinnacle of her career, to spend more time with her family while bringing her experience to bear on corporate governance and helping to change the business landscape for other women.

Introducing Williams in the Performing Arts Center, Head of School Rick Hardy discussed the progress she has brought about for many organizations as well as the “extraordinary impact” she has made in leading the Concord Academy Board of Trustees for the past five years. “I am not sure how she does it,” Hardy said, “but her energy seems without limits and her commitment to serving others is amazing.”

As president, Williams has spoken at CA on many occasions, though this was the first time she came to speak about herself. A parent of Alex Miller ’08, Becca Miller ’14, and Ben Miller ’14, she has seen her share of chapel talks, though, and she told students that their willingness to share their stories, “many of which have been poignant, profound, and deeply moving,” gave her the courage to share her own.

Williams is humbled by what she has been able to achieve. She grew up in class-conscious Britain, where she didn’t benefit from an elite private high school or the equivalent of an Ivy League education. She described her family as “middle class with solidly working-class roots.” Her mother had worked in a bank, before being expected to resign when she married, and that industry was closed to her even when she returned to the job force as a working mother. “We should never take for granted the opportunities that we enjoy today thanks to those who fought to overcome injustices before us,” Williams said.

While not financially privileged, her parents did confer on Williams several advantages: they valued education and encouraged her to believe she could do anything she set her mind to. Family camping trips to France and Spain — cheaper alternatives to U.K. holidays — exposed her to a cosmopolitan world she relished and wanted more of.

Active in sports and accomplished academically, Williams loved languages and become head girl. She went into her A-level exams the final month of her senior year looking ahead to enrolling at her first-choice university, where she had been conditionally accepted. That August, she learned that her scores had fallen short and she would be unable to attend.

“I frankly thought my life was over,” Williams said. “I was devastated, and my dreams were thwarted. I’ve listened to Commencement speakers at CA who highlight the willingness to be open to serendipity and explore the opportunity of the unexpected. I have to admit that at that time, I didn’t view what was happening to me as an opportunity.”

But with the support of her family, Williams was determined to demonstrate that she would not be defined by the results of just three exams at the age of 18. She graduated instead from Kingston Polytechnic, in London, with joint honors in French and economics. Overcoming that early setback gave her the drive to continue studying and earn a master’s degree in economics from the University of London.

Williams said the investment management business attracted her because of the opportunities it provided to employ analytical skills, work independently, and be judged on her own performance. But the sexism she encountered was pervasive. On two occasions, she learned that had she not worked out, her company would never have hired another woman. Business lunches took place in London’s guild halls, which she described as “steeped in tradition and entrenched misogyny,” where she was sometimes mistaken for the help. Her work took her to the United States, Japan, Dubai, and Abu Dhabi. Businessmen in the Middle East, surprised by her leadership role, were polite and respectful but never made eye contact. But Williams found several mentors, all men, and developed new skill sets. “I was proud to be trusted with the privilege of managing others’ money,” she said.

As a working mother, she would arrive at the office early in the morning and — she prides herself on her cooking — leave in time to make dinner. But work and family, she said, “consumed” her life. She traveled frequently, logging 3 million miles on American Airlines alone, in spite of her best efforts to be home.

Williams had become a partner at one of the largest investment management companies in the world and was repeatedly recognized at the top of the field. But she felt a nagging sense of discomfort. “I was looking to make a difference in people’s lives, not just their livelihood,” she said. Just as she took a leap of faith in moving to the U.S., she took another in starting her second chapter, in corporate governance, which she threw herself into despite gender biases, and began working to promote and advance other women. 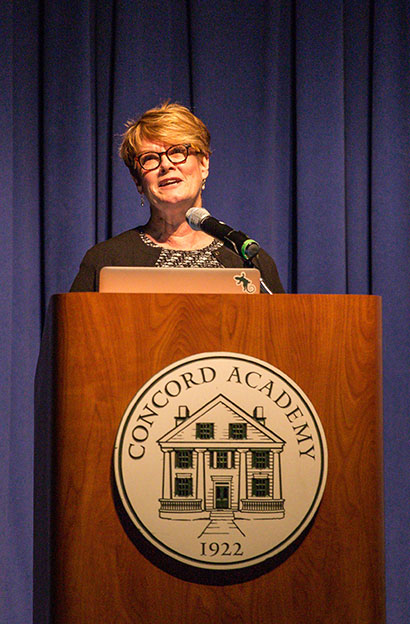 Williams sits on the boards of Weyerhaeuser Company, one of the world’s largest owners of timberland; Xcel Energy, the largest provider of wind power in the U.S.; MicroVest, an asset management firm dedicated to investing in underserved markets; and E.W. Scripps, an American broadcasting company. Eventually, she brought her experience to nonprofits that share her passion for inclusion and equity, focusing on women’s rights, poverty alleviation, education, and healthcare. “It allows me to deliver on my promise to give back,” she said.

Of her corporate roles, Williams said, “I want to be involved with companies that are doing the right things.” She cautioned against painting the motivations of all corporations with too broad a brush, pointing to the directors of Weyerhaeuser as committed stewards of its land. “It’s important to embrace what can be positive about corporate America,” she said.

Asked for her opinion on quotas to redress the scarcity of women on corporate boards, Williams said she is not a fan, because they contribute to “an assumption that you’re adding her because she’s a woman not because she has the appropriate skill set.” Many companies only consider sitting CEOs, Williams said, so change is a matter of working with men and educating business leaders that it’s not necessary for someone to have that traditional qualification in order to play a very valuable role in corporate governance. She smiled as she said, “There’s no shortage of qualified women to go on boards.”