“Head Over Heels,”  The GoGos; “Together Again,” The Muppets

I’m so glad Amy Kumpel encouraged curiosity in her remarks yesterday, because she set me up well for this chapel. Curiosity has been a popular topic in my world recently. This past summer, I rewatched season 1 of Ted Lasso with my son—the show has become all the rage in some circles for its heart, lessons, and sound bites. In one often noted hallmark scene, Ted describes seeing a quote on the wall from Walt Whitman that says “Be curious, not judgmental.” That Ted Lassoism has become a catchphrase in our house this summer too, though we’ve shortened it to “be curious, not judgy.” I think the line gets thrown at me the most, and I would probably be voted “most judgy” in the family. That’s perhaps not surprising given that on the Myers Briggs test I took online this summer, I landed pretty firmly in the J or “judging” category. To be fair, the “judging v. prospecting” personality trait doesn’t really have to do with whether you’re judgemental, but it certainly didn’t help my case much with my family. While I’m not sure how much stock I put in these types of personality tests, I was struck by some of the things it claimed about me, particularly what is said about how I likely approach parenting. It said people with my personality type can unconsciously project their own beliefs onto their children, expecting them to have the same standards, ethics, etc., they expect from themselves, but at the same time we encourage our children to “think independently, make their own choices, and develop their own beliefs.” This, it said, can be “confusing and stressful” to children. To my children, I’m sorry my inherent personality type inflicts this upon you. The good news is that the internet predicts you’ll turn out fine, and that you will “come to appreciate the combination of independence and integrity with which [you] were raised.” Perhaps I will throw that line back at you the next time you call me judgy.

It strikes me that this is somewhat characteristic of CA as well. As a community we hold one another to high standards, common trust is built on the notion that we respect, look out for, value, and care for one another—it doesn’t work unless we support these shared expectations, and at the same time, we encourage independence and we honor individual voices. Personally, I don’t really see these pieces in tension—I think that’s why they live so well together in our mission. For it is in hearing and listening to the voice of the individual, that we ensure the shared culture is inclusive, that we collectively define the notion of common trust, and that everyone can see and find themself at CA. I imagine it can feel “confusing and stressful” at times, but when I see CA grads leave here with that combination of independence, self-advocacy, social responsibility, community, and empathy, it makes me feel very fortunate to be part of this remarkable place. I am beyond thrilled, more than I can even put into words, that we are all back here in this Chapel together, to build our CA this year.

“Cast Your Fate to the Wind”

Back to the Ted Lasso scene and “Be curious not judgemental.” As it turns out, while this is a quote oft attributed to Walt Whitman, there’s no evidence that Walt Whitman actually wrote it. So I will continue to call it a Ted Lassoism. And I am trying to embrace it this year, asking myself if I am being curious enough. This scene also had me thinking this summer about the sayings that have stuck with me over the years. Interestingly, one of them is also from a misattributed poster. When I was in high school, in the room where we had our health and wellness classes, there was a poster with a quote from Eleanor Roosevelt that said, “No one can make you feel inferior unless you let them.” I used to tell myself this all the time, especially in my young adulthood, finding confidence and comfort in my own inner dignity. As I read up on Eleanor Roosevelt, it turns out there’s no evidence she wrote this quote either. She did say something along the same lines, but someone else at some point, seems to have turned it into a health-class-worthy poster quote. Eleanor Roosevelt was a woman of extreme privilege, but who suffered at the hands of the men in her life, and I used to picture her and that poster—squaring her shoulders, standing up tall, and reminding herself, “No one can make you feel inferior unless you let them.” I still feel very strongly about inner dignity, but over the years, I’ve also come to push back against this quote, and wish the smiling Eleanor poster had in fact said, “No one has the right to make you feel inferior.” Maybe Eleanor and I kept a stiff upper lip a little too much. I sometimes wonder if there were times in my life when I relied too much on my own inner dignity, taking the so-called high road, rather than standing up for dignity itself.

Which ties into another one of my favorite posters from childhood. In my grandparents’ house there was a poster with some abstract modern art and a quote from Dag Hammarskjöld, secretary-general of the United Nations in the 1950s. The quote read, “Never, for the sake of peace and quiet, deny your own experience or convictions.” These words are actually Hammarskjöld’s; Hammarskjöld, by the way, is the only person to ever be posthumously awarded the Nobel Peace Prize. The quote comes from his journals, and I’ve thought of it throughout my life. As someone who is conflict averse, I keep it as an important reminder that you can’t compromise who you are and what you believe just to keep things nice. When my mother was cleaning out my grandparents’ apartment, she asked if there was anything particular I wanted, and to her surprise, I named that poster. It now hangs in my daughter’s room, and I hope it speaks to her the same way it has spoken to me all these years.

It’s interesting, though, that we often fixate on attributing insights or advice to famous people. Two of the pieces of wisdom that I carry with me don’t come from posters, and they don’t come from anyone famous. In fact, they come from fleeting moments in my life, and yet they’ve stuck with me. One comes from a brief trip I made to Alaska. My big sister, always cooler and more adventurous than I, had gone off one summer to work for the National Park Service in the Yukon. At the end of the summer she called home to say that she had decided to stay in Alaska and that she had a new boyfriend named Mark. Later that year, I made the trip solo to Alaska to reunite with her and to meet Mark. Mark was a fireman; he was kind, humble, and generous, and kept caribou in his freezer and used it in spaghetti. He also had the most wonderful dog that he had trained up from a puppy —I’d never met a more perfect dog, or seen as much human-canine symbiosis as I saw between Mark and his dog. One night Mark and I got to talking about caring for animals, and I shared that for some years I had thought about being a vet, but because we never really had any pets, I felt like I would never have the same ease and knowledge with animals as someone like him. I remember he smiled at me and encouraged me to become a vet, telling me not to let the unknown hold me back: “All you’re missing is practice,” he said. Ultimately, I didn’t become a vet, but I thought a lot about what he said. When I went back to school, I took courses in things that were new and unfamiliar, and while I haven’t been in touch with Mark in over 25 years, whenever I’m confronted with something that feels new and daunting, I think of his words. I’ll usually try to take whatever it is on and tell myself, “All you’re missing is practice.”

The last thought I want to share with you comes from someone so anonymous that I don’t even know their name, and yet they definitely gave me a life advice poster quote. I went to a Red Sox game with my family, where I met the friend of a friend, and we all ended up standing around talking for a while by the concessions stand. She was older, friendly and relaxed, telling some stories about her teenage kids. I was standing there feeling hot and harried, an exhausted young mother, who had probably just spent the last two hours trying to wrangle an incredibly energetic toddler. I remember she shot me a sympathetic smile. I looked at her and said, “Tell me it gets easier.”

And that’s what I hope for all of us this year—that we’ll be curious, we’ll stand up for dignity and our convictions, we’ll practice new and daunting things, and while it may not get easier, we’ll get better at it.

I’m going to leave you with a song that isn’t a particular favorite of mine, but it was on my mind while writing this chapel, because this was the album my sister and I blasted with the windows down as we drove through the Alaskan mountains—it was 1995 after all—and because I hope this year we will all do some living, laughing, and learning together. 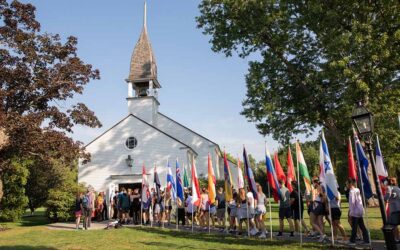 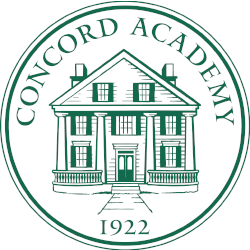 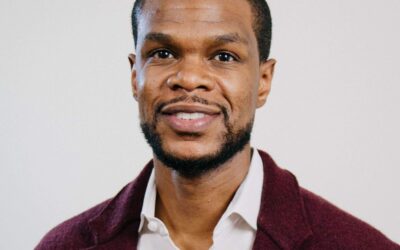