For a Community and Equity Assembly on the 2019–20 Theme “Journeys to the Self,” Gyasi Ross Speaks at CA about Identity and Collective Responsibility 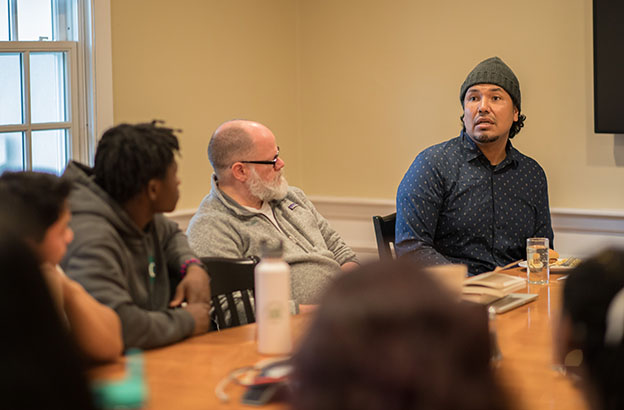 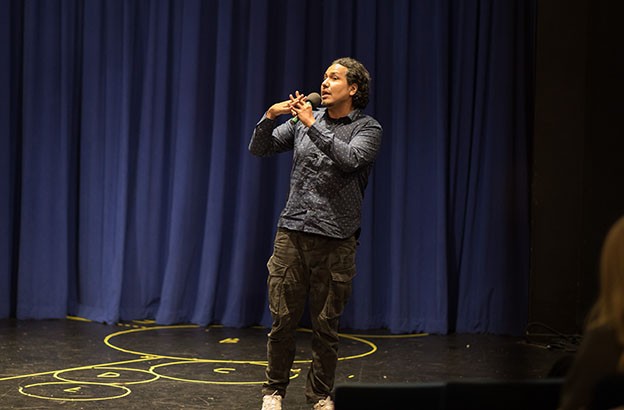 Author, speaker, and storyteller Gyasi Ross defines himself with a number of other identities: He’s a father, a lawyer, a musician, and a member of the Blackfeet Nation who resides on the Port Madison Indian Reservation near Seattle. On October 10 at Concord Academy, in a Community and Equity assembly both vulnerable and expansive, he discussed the importance of recognizing all identities, as well as of balancing focus on the individual with a sense of collective responsibility.

Though Ross has scaled back on speaking engagements in recent years, the invitation to come to Concord Academy intrigued him, he told a group of student leaders in conversation over lunch, because of CA’s commitment to making institutional changes based on respect for every type of individual. “To do our best work, we have to find our personal stake in it,” he told them. 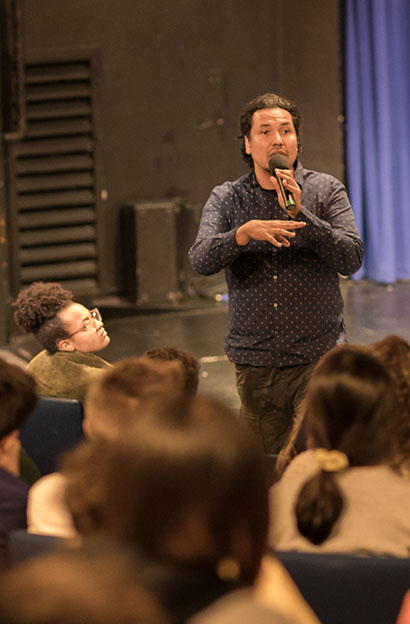 At the assembly, Ross started from the personal, telling anecdotes from his perspective as a Native American in an urban setting, including the stereotypical assumptions he encounters. He detailed his own evolution, as a 43-year-old cisgender male, of coming to recognize the importance of stating gender pronouns as a way of supporting individuals outside the gender binary.

Ross addressed the lack of Native American representation in the U.S. history he was taught as a student. He spoke about the grassroots movement across the United States to replace Columbus Day with Indigenous People’s Day as a way, he said, of “forcing attention” to be paid to the history of genocide of indigenous peoples as well as their continued existence today. “We have to take time to acknowledge other identities very deliberately,” he said.

According to a recent scientific study, Ross shared, in the absence of strong visual cues, people walk in circles — and he compellingly used that finding as a metaphor for the experience of people outside of the dominant culture, who from lack of representation, cannot orient themselves when told to walk in a straight line.

“For many native people, self is secondary to community,” Ross said. His message for CA students coming of age in a more crowded and fast-paced world than ever: To confront the “common enemies” of climate change, hate, and intolerance, “we all have an obligation to work together.”

That work involves creating new norms that are respectful of all identities. It’s work he said he trusts this generation, which has demonstrated, he said, “a level of focus, empathy, and compassion that didn’t previously exist,” to take on.