Marking the Start of Concord Academy’s 98th School Year, Convocation Focused on Learning as Individuals and in Community 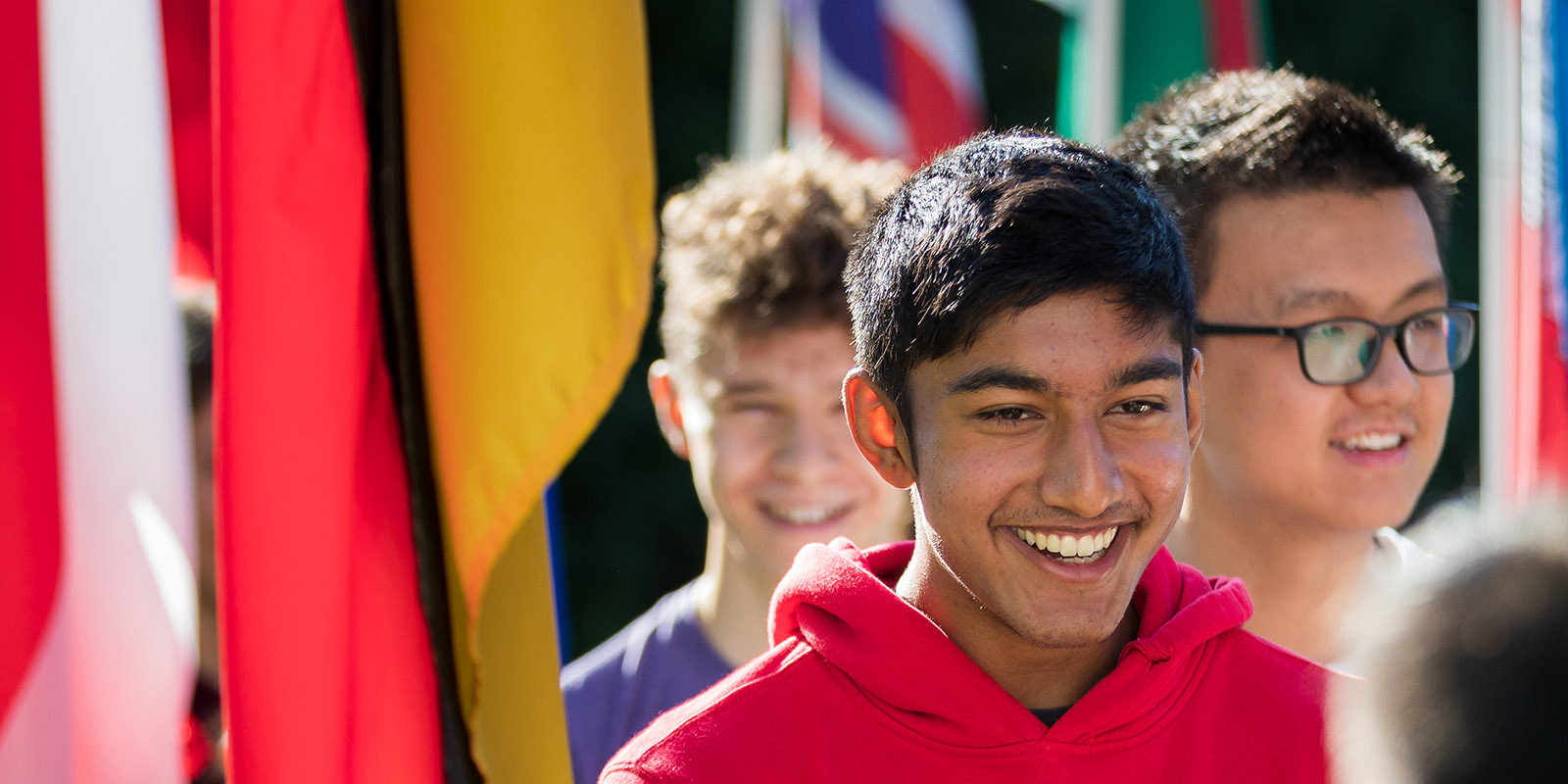 On the morning of September 3, 2019, the Concord Academy community gathered in the Elizabeth B. Hall Chapel for Convocation, the official start to the school’s 98th academic year. Head of School Rick Hardy warmly welcomed 100 new students and seven new faculty and staff members, as well as returning students and adults.

Encouraging students to embrace the opportunity that the beginning of this new year presents, “to listen, to learn, to make friends, and to try things you have not tried before,” Hardy discussed CA’s tradition of senior chapel talks. He also shared the school’s newly revised mission statement:

We are a community animated by love of learning,

diverse and striving for equity,

with common trust as our foundation.

Honoring each individual, we challenge and expand

our understanding of ourselves and the world

through purposeful collaboration and creative engagement.

We cultivate empathy, integrity, and responsibility

to build a more just and sustainable future.

“Explicit in our mission is the idea that learning is not a solitary pursuit; it is a process that is enriched, made better and more meaningful, by the differences in our views and our personal histories,” Hardy said. 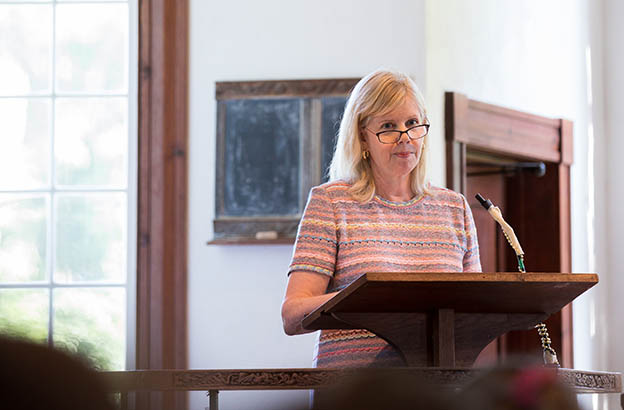 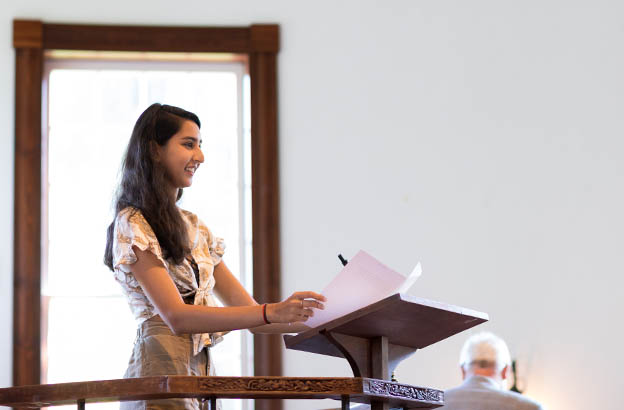 Fay Lampert Shutzer ’65 (left), president of the Board of Trustees, and Vedika Sharma ’20 (right), student head of school, speaking at Concord Academy’s 2019 Convocation.

In her remarks, Fay Lampert Shutzer ’65, president of the Concord Academy Board of Trustees, reflected on some feedback her geometry teacher offered her when she was a freshman at CA: Her first test of the semester was returned with “See me!” written on it in red ink. Far from the reprimand she feared it might mean — Shutzer had come from a school where, she said, she was afraid to be wrong — the comment was actually an invitation to converse and collaborate. “Those two simple words turned out to be an invitation that changed how I thought about CA — and for that matter, about education,” Shutzer said.

She urged students to remember that they too can start such conversations — they aren’t expected to have everything figured out — and that CA itself is dedicated to learning. “This is a place, a community,” Shutzer said, “in which we want to see you and for you to truly be seen.”

Student Head of School Vedika Sharma ’20 encouraged her fellow students to try their hands at something new, and when they inevitably encounter difficulties, to lean on the community for support. She explained the Student Council’s responsibility to “speak on behalf of the student body” and invited all students to participate in its open meetings. As she told the community, “Whenever we’re in doubt, we should always turn to our foundational principles and be reminded of the value in listening to others and being open-minded. Common trust started as an idea, but we are the ones who brought it to life and continue to do so every day.” 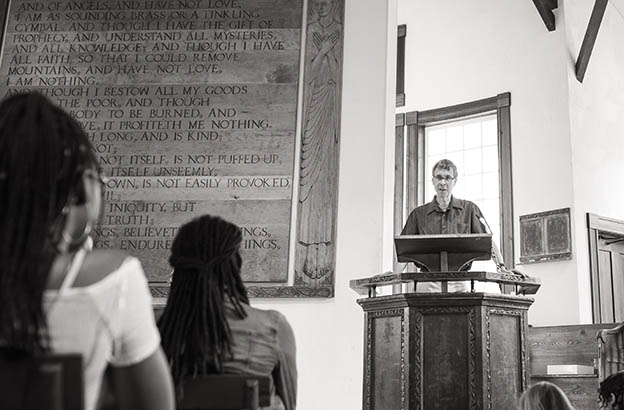 “Your own struggles will help you learn — slowly — how to have kindness and compassion for others and their struggles. Seeing that everyone struggles, you’ll learn, I hope, to have compassion for yourself.”

The Convocation address from Jon Waldron, coach of CA’s cross-country and track and field teams, argued against a prevalent notion of education as a “steady climb, a progression from success to success, and an enterprise that, like running a race, rewards the speedy.” Instead, Waldron presented a case for learning slowly, over time, with patience for the many ups and downs along the way.

“Don’t mistake difficulty for failure,” he said. “Difficulty is exactly the raw material you need to begin learning the really important stuff.” And that important stuff, as he detailed, includes “kindness and compassion for others and their struggles” as well as “compassion for yourself.” It includes learning how to listen, to both self and others.

“When you listen, you might hear things that make you sad or angry or uncomfortable, but hearing them will make you grow,” Waldron said. CA teachers, he continued, “will encourage you to explore beyond what you thought were your limits. Not only will you begin gathering clues about where your own interests and passions lie, you’ll also develop the habit of exploration that will fuel your self-discovery long after you’ve left this school.”

Waldron talked about his own education, formal and informal, and his early years in the world of high tech. His love of running led him to dream an ambitious dream: He trained hard for many years to qualify for the U.S. Olympic Marathon Trials. It was a goal that, in the end, he didn’t reach.

But the slow process of learning about himself did not stop. Upon seeing how his daughter took to cross-country running in high school, he set out on the most fulfilling leg of his career, as a coach. With a determination to focus not solely on the strongest runners but rather on the whole team, he later came to CA, where he has been a remarkable coach and mentor ever since.

“Now, if I were offered the choice of running in the Olympics, inventing the next iPhone, or having the opportunity to coach at CA, I would choose the absolute coolest thing I could think of: I would choose coaching at CA,” Waldron said.

“The most important learning you’ll do here can only happen slowly,” he advised. “Let’s try to help each other respect slow learning and the process of figuring out what it is we love, how to pursue it, and how to share it with others — and if it’s not asking too much, let’s try to do that with kindness, compassion, and perhaps even a little patience.”

Fay Lampert Shutzer ’65, president of the Board of Trustees