The familiar places where we live and learn are worthy of deep attention; understanding their histories rewards us with expanded knowledge of ourselves and the world. This was a message that historians Ed Rafferty P’19 ’21, who teaches history at CA, and Lucille Stott, former faculty, presented as part of the CA Houses Unlocked celebration on October 4, held to mark the completion of the school’s two-year CA Houses initiative. In their talk, “Places with Provenance: The History of the Main Street Houses,” in the new William M. Bailey Commons connecting Haines and Hobson, they explored both the early and more recent history of the neighborhood along Main Street that became Concord Academy.

Rafferty, who links his teaching of Native American history to the local environment and the individual experiences students bring into the classroom, began by orienting the audience in Concord as a crossroads for the indigenous Nipmuck, Pennacook, and the Massachusett nations who stewarded the land long before European colonists occupied it, and later in this history of African American slavery in this area. “This history can be difficult to face, but we do ourselves a disservice, and we do the past a disservice if we don’t notice,” Rafferty said. “When we do notice, we do the work of social justice.”

In the 19th century, as Rafferty detailed, Concord’s occupants faced their past and worked for a more just future. Rafferty discussed local abolitionists such as Mary Brooks and visits by prominent supporters of the Underground Railroad such as Harriet Tubman, Frederick Douglass, William Lloyd Garrison. Many families along Main Street were active in antislavery work.

Stott, who has lived in four of CA’s residential houses and had offices in two more, took up the history in the 20th century from the founding of Concord Academy in 1922 and the purchase of Haines House that year, initially the entirety of the school, to the acquisitions of the student houses, Hobson (1925), Admadjaja (1946-1951, repurchased in 1954), Bradford (1947), Wheeler (1958), and Phelps (1959), among other campus buildings. The founders desired a “simple, homelike atmosphere with nothing pretentious and nothing institutional,” which still describes CA today.

A pivotal moment in the school’s history took place in 1956, when a visiting New England Association of Schools and Colleges (NEASC) committee reaccredited the school but declared the physical environment deplorable and recommended modernizing. For a time, the school considered demolishing the Main Street houses to erect a cinderblock dormitory. “Luckily, it was the only time in the history of Concord Academy that the lack of funds proved to be an asset,” Stott said. “They didn’t have the money to act impulsively.” Ultimately, Head of School Elizabeth Hall determined the houses were irreplaceable and that to destroy them in the name of modernization would be an “affront to sentiment, but also to a heritage cultural, aesthetic, and historic, for which we have a positive responsibility.”

Rafferty and Stott’s deep dive into the Concord Academy’s past reinforced the continuity of the values that guide the school to this day. 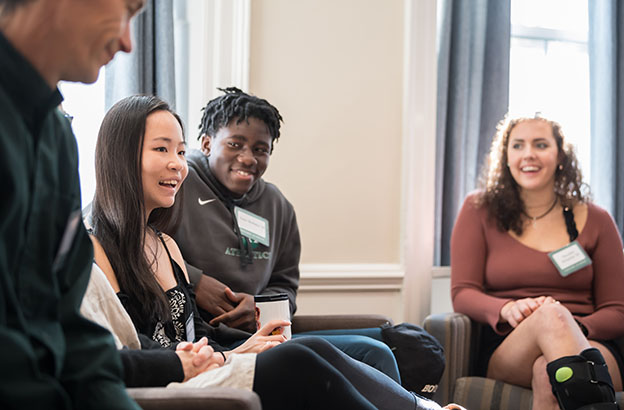 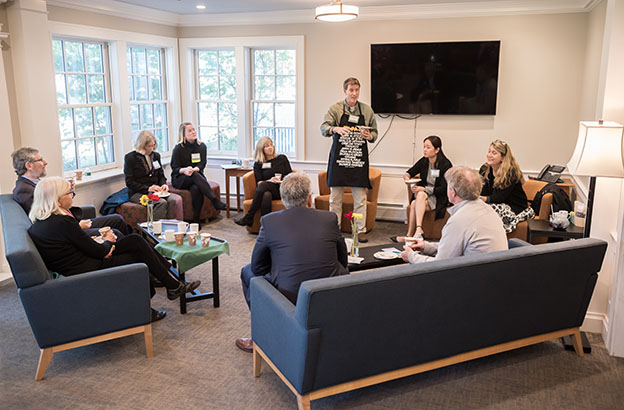 A presentation called “Concept to Completion: Inside the Process of Renewal” followed. Don Kingman, CA’s director of campus planning, design, and construction, and architects from Dewing, Schmid, Kearns discussed the planning and process that helped CA examine its use of existing facilities and prioritize expansion and reconfiguration, resulting in larger and more effective gathering spaces in all of CA’s student houses.

Other CA Houses Unlocked sessions that afternoon included “Influential Surroundings: How Our Physical Environment Shapes our Experience” in the Admadjaja House common room. There, guests heard from house faculty Kim Frederick and Ben Stumpf ’88 and members of the 2019–20 Boarding Council — Isaac Bediako ’20, Sky Cole ’20, Charlotte Ko ’20, Meredith Benjamin ’20, and Navi Turner ’20 — about how the renovations completed as part of the CA Houses initiative are serving CA’s mission by connecting the community and have already enabled new possibilities for living and learning at CA .

In the Sylvia M. Mendenhall Common Room in Bradford House, a program entitled “Creating Space for Learning and Discovery” convened several CA faculty members to share how the new common rooms have already opened the door to new and reinvented upper-level classes. In Susan Flink’s Chemistry of Cooking class, students’ exploration of the chemical processes involved in fermenting, brining, acidifying, drying, and mixing ingredients and creating foams, emulsions, and gels is no longer confined to the laboratory. The new common rooms have opened possibilities for centering advanced language classes around food and social conversation, as Spanish teacher Adam Bailey and Mandarin teacher Wenjun Kuai attested. (Bailey even prepared tapas for the event, as he does with his students.) The rooms are also providing space for special evening seminars such as history teacher Stephanie Manzella’s The 1619 Project: Confronting Slavery, which she designed in response to the New York Times’ yearlong 1619 Project, which marks the 400-year anniversary of the beginning of slavery in what has become the United States. Holding this class in a common room rather than a classroom, she noted, helps students to grapple more personally with being part of a national conversation about how the U.S. should acknowledge the inhumanity of its past in order to prepare for a more just future.

The day’s programming concluded on the Chapel lawn with a celebration of CA Houses and the official dedication of the William M. Bailey Commons. CA welcomed backed the alumnae/i, parents, and friends who made the dream of CA Houses a reality, and whose leadership and steadfast belief in the CA’s distinctive and exceptional educational experience brought the school to this moment.