“If you don’t see the literature that you want to see on the shelves at your library or bookstore, it’s incumbent on you to go out and write those books,” said Alex Myers at the beginning of a Community and Equity assembly at Concord Academy January 30. A writer, speaker, and advocate for transgender rights, Myers also teaches English at Phillips Exeter Academy. His 2019 novel, Continental Divide, offerers a counternarrative to a dominant storyline in LGBTQ+  literature, a category in which plots tend to culminate, after considerable questioning of identity, with characters coming out. “You know very well,” Myers said, “that’s actually where the story begins.”

His talk centered on the importance of representation, in the language we share as well as in the stories we tell and listen to. As a child, Myers felt torn between the only two words available — “girl” or “boy” — and, he said, “lacked the language to explain the concepts in my head.” “Tomboy” proved an empowering category (for girls, at least — Myers noted that there was no equivalent term for boys deviating from gender expectations), and the relative social acceptance of gender-nonconforming clothing and hairstyles in the 1980s helped. That acceptance ended, however, with the onset of puberty.

Myers came out in high school and headed to college hoping to pass as a cisgender man. His experience of testing that perception on a dude ranch in Wyoming formed the basis for what he calls his “coming-of-gender novel,” in which he seeks to confront American masculinity through an encounter with the hypermasculine “cowboy culture.” Myers was outed as transgender and fired from that job  — which was legal in Wyoming in 1997, when it happened, and remains so there and in 31 other U.S. states today. He went on to work for the forest service, and that summer became the basis of Continental Divide. 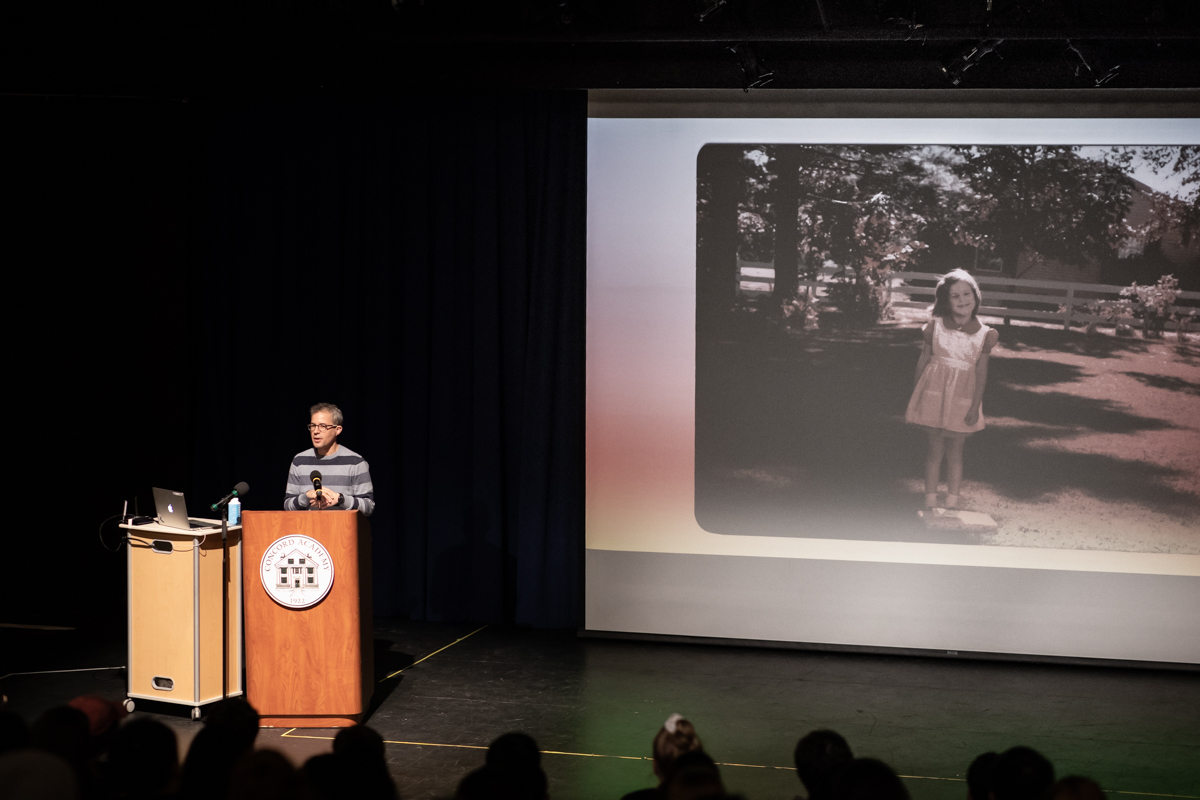 The experience, he said, “made me more fully embrace the term ‘transgender.’ It made me realize that, in fact, though I could live as a man, what I really felt was in-between. What I really felt was being both a man and not a man simultaneously, and all the ways that that can be both limiting and freeing.”

That realization wasn’t an endpoint, but rather a step in a continual process of discovering who he is. “That, to me, is very much how gender works,” he said. “I think it’s important to realize that all of our individual gender identities and expressions will probably change a fair amount over our lifetime. Some of that will be about who we are internally, but also a lot of that will be about the cultural and historical forces around us. Gender changes a lot.”

Delving into some history was illuminating in this respect. Myers showed a portrait of Louis XIV, whose long locks and gartered stockings he interrogated along with students from the audience, and a photograph of Franklin Delano Roosevelt as a young boy in a frilly frock. He examined how standards of masculinity are not fixed but rather change considerably over time.

“Your generation has been raised in a very, very binary set of expectations for gender, much more so than my generation,” he told students, contrasting the highly gendered contemporary packaging of toys today with relatively gender-neutral Lego advertisements from the 1980s. A survey of magazine covers revealed that, more often than not, young people in 2020 are being driven to expect that boys and girls have different expectations, hairstyles, clothing, and interests that don’t overlap. “That’s what you’ve been fed,” Myers said, “and it’s no wonder, then, when students are coming out as genderfluid, there’s a sort of difficulty with accepting and questioning of how you’re going to make it if  you don’t live within the binary.”

As Myers made clear, gender has not always been presented this way. Likewise, he said, “there have always been transgender people; there just hasn’t always been a term for it.”

Myers presented some of his research into transgender men and transgender women from various historical periods — and the variety of treatment, both accepting and not, which they received. One of his own distant ancestors, Deborah Sampson, fought in the Revolutionary War disguised as a man — she was the basis of Myers’ 2015 debut novel, Revolutionary.

The media’s tendency to focus on change, its insistence on narratives of transition, can eclipse narratives of self-discovery that are actually more important, Myers said, ones that reflect “the reality of becoming who we really are.”

In his books, he said he tries to “show what’s possible in a transgender life.” He also tries to have some fun with it. His third novel, The Story of Silence, which is coming out in July, is a historical fantasy based on a real 13th-century French poem. Even then, he said, people were wondering whether gender comes from nature or from nurture.

“This is not new,” Myers said. “This is something we’re going to continue to grapple with, and we should all be thinking about it. Gender does shape our lives, no matter if we’re transgender or cisgender. It’s one of the strongest forces for social control that we have.”