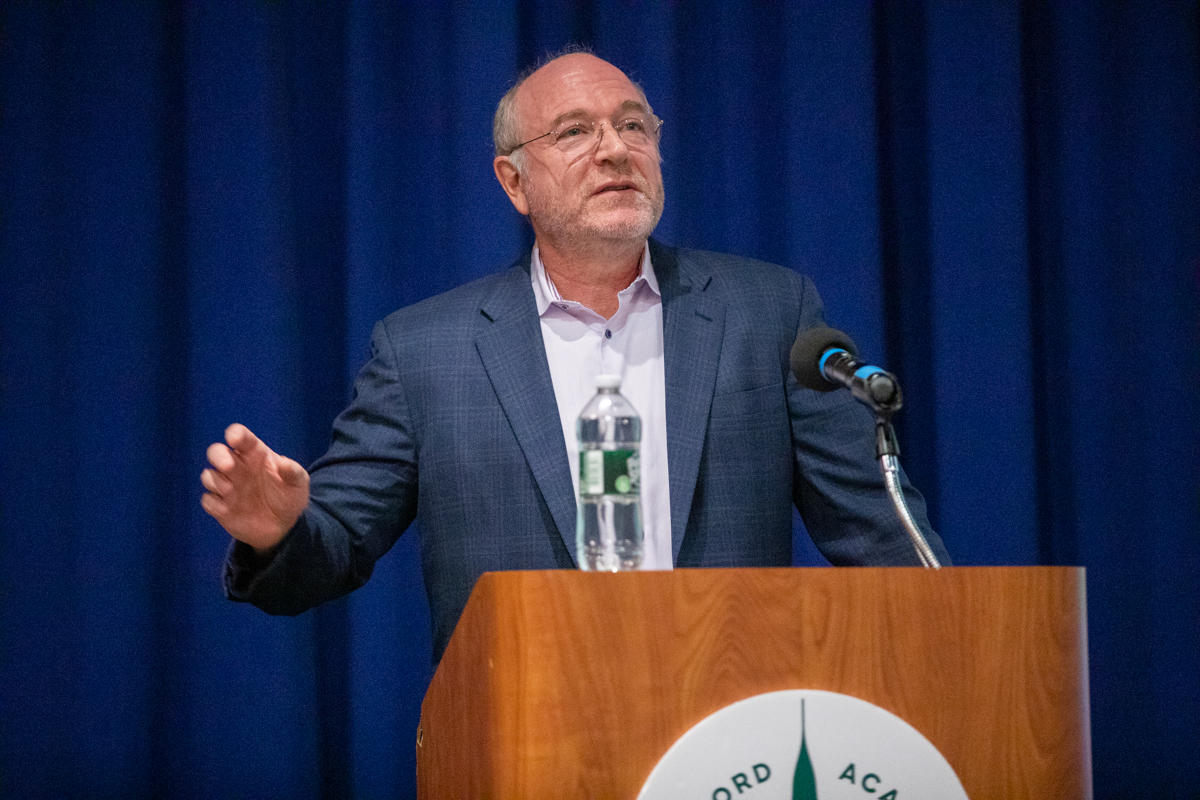 When Richard Selden P’23 spoke at an all-school assembly at Concord Academy on November 16, he acknowledged how much CA students want to change the world. “No matter what your academic and career interests are, you can find a way to tie them into fighting for social justice,” he said. Selden shared how he turned his passion for molecular biology into a technology that is preventing human trafficking and sexual assault, catching terrorists, better identifying disaster victims and missing migrants, and helping separated families reunite.

Selden wanted to be a doctor since he was 5 years old and later became fascinated by genetics, his daughter Isabella-Marie ’23 said in her introduction. He earned his bachelor’s and master’s degrees in biology, then a Ph.D. in genetics, all from Harvard University, and an M.D. from Harvard Medical School, completed his residency in pediatrics at Massachusetts General Hospital, and started a lab working on genetics. In 2004, he founded the biotech company ANDE, which pioneered Rapid DNA analysis. At CA, Selden explained the science behind the technology, its increased efficiency and accuracy over the standard lab process for DNA testing, and its applications in a wide variety of fields.

Some 25 years ago, when Selden was a practicing clinician, he heard a shocking statistic: It took, on average, six to 24 months for evidence collected from crime scenes to be processed for DNA—not the one hour it seemed to require on crime shows. He set about figuring out why it was taking so long and soon saw the potential to get results in minutes if the process could be automated.

When Selden consulted with forensic experts in the federal government, they called his idea ridiculous. “They were so adamant about it never working that I knew they had to be wrong,” he said. Undaunted, Selden set about developing a rugged, self-contained, automated DNA fingerprinting system that was able to withstand bumps and jostling without needing recalibration—and provide DNA results in less than two hours. When he positioned the device as being capable of speeding up lab work, the project received the funding it needed. The FBI,  Department of Defense, and Department of Homeland Security soon began testing the new Rapid DNA technology.

Rapid DNA works the same way traditional DNA fingerprinting does: by identifying short tandem repeat (STR) sequences, which are inherited from one’s biological parents. While a single repeat can’t positively identify an individual—a certain percentage of the population may share it—a combination of 20 STR sequences can identify an individual with a random match probability of less than 1 in 1 million quintillion, or, as Selden said, “less than the number of stars estimated to exist in the universe—the technology is extraordinarily accurate.” 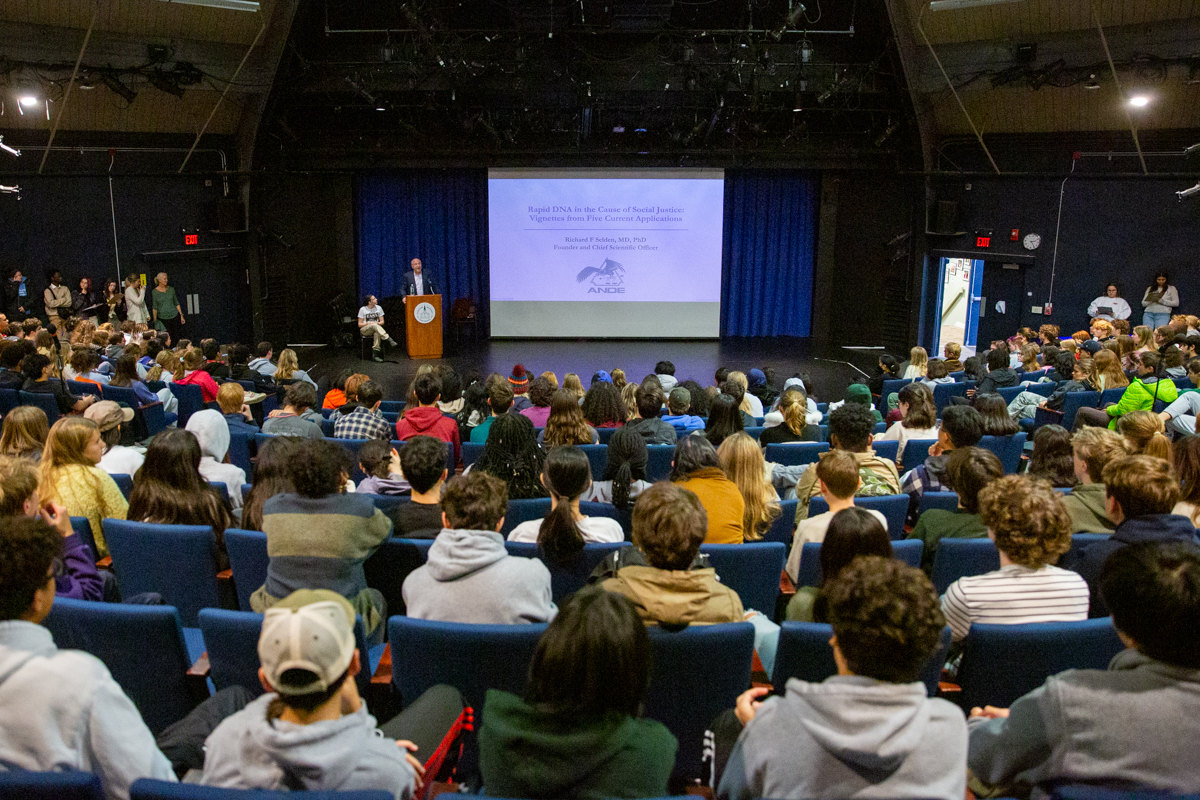 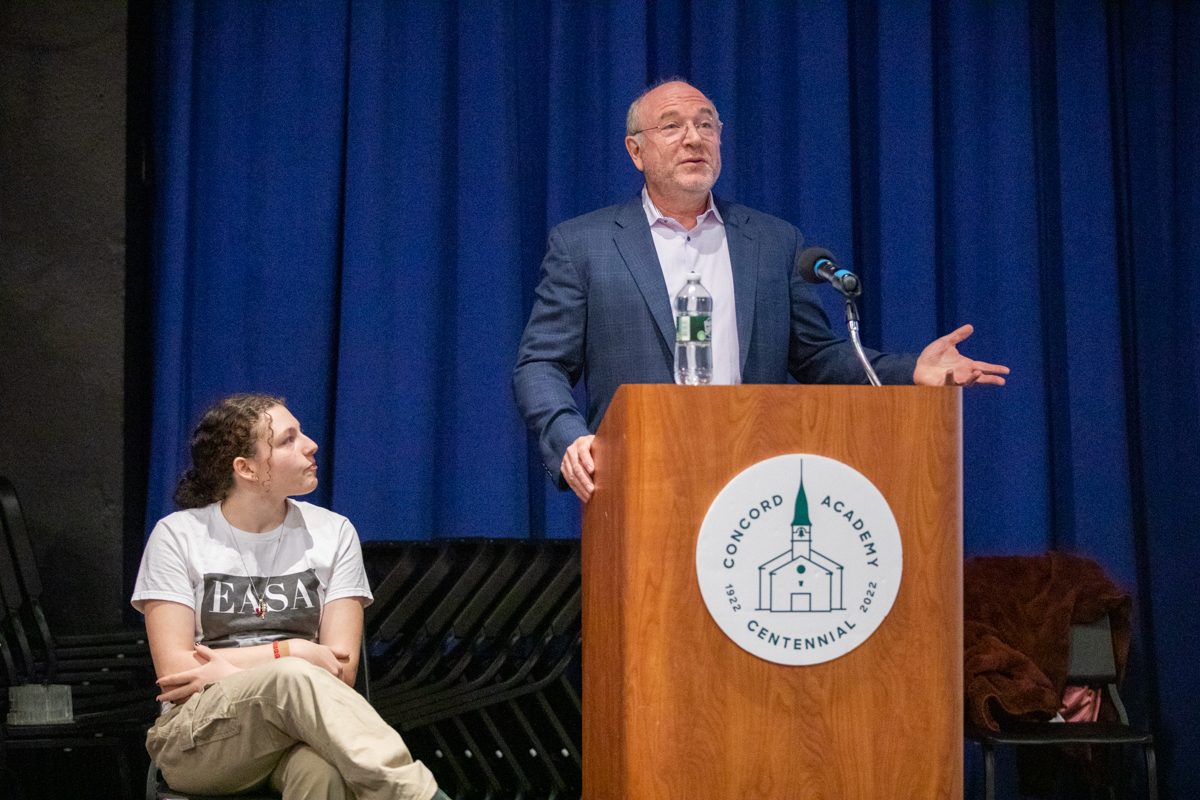 Once a forensic sample is collected, the cells are broken apart and the DNA is purified, copies of the STR loci are made, and their sizes are determined. What Rapid DNA testing does differently is combine these steps into a portable, fully-automated system that can be deployed essentially anywhere by anyone, with no medical or scientific training required. The technology is not only orders of magnitude faster than traditional laboratory testing (less than two hours compared to 6–24 months), it is also more accurate than traditional lab DNA testing (which is vulnerable to human error)—and far more accurate than identifying individuals using a fingerprint or an iris scan—and also less costly.

Addressing the privacy concerns some have expressed about the technology, Selden shared on the P.A.C. screen the DNA fingerprints of his daughter, Isabella-Marie, and her parents–and he has also published his DNA fingerprint broadly. He made clear the distinction between DNA fingerprinting and whole genome sequencing, which many conflate. Rapid DNA yields less information about an individual than a social security number or a photograph, Selden said, and it can only be used for identification or to confirm close biological relationships. It says nothing about appearance, geographical origin or ethnicity, or behavioral or medical history.

“By learning the underlying science, it is possible to convince people that Rapid DNA is not a threat to privacy,” he said. “For example, a group of leading social justice and human rights advocates who were once concerned about DNA privacy issues are now advocating using Rapid DNA testing around the world to advance social justice.” Learn more at DNA Bridge.

To illustrate some of Rapid DNA’s many applications, Selden discussed its deployment in the 2018 Camp Fire in California—the deadliest wildfire in California history and the  first time the technology was used in a mass disaster. He spent three weeks onsite, with three instruments in the back of a rented RV, collecting and processing victim samples and cheek swab samples from family members of missing individuals. Families who had been expecting to wait for months or years to learn the fates of their loved ones received results within two or three days. The Sacramento County Coroner became a strong advocate of Rapid DNA, and now the system is being used throughout California in disaster victim identification and in criminal investigations.

In many states, including Massachusetts, the standard lab process for DNA fingerprinting is still resulting in monthslong waits. But the technology is starting to be deployed more widely. In Ukraine, victims of a missile attack on a shopping mall in June were identified the same day. Kentucky recently became the first state to commit to broadly use Rapid DNA to reduce sexual assault by identifying and arresting recidivists much sooner.

“We all have an obligation to advance social justice, and CA students are blessed with an education that will enable them to do just that,” Selden said. And to those CA students who have the motivation to make a difference in people’s lives and who dedicate their time and talents to do so, he promised great “rewards, both intellectual and of the heart.”