From the Winter 2022 Issue of CA Magazine

When Henry Fairfax read what Concord Academy was looking for in its next head of school, his eyes went directly to CA’s mission. “I thought, those lyrics sound just like my educational philosophy,” he says. “They’re talking about trust, love of learning, equity—let me take a closer look.” Although Fairfax deliberately built his career near his home city of Philadelphia, he says, “The more I learned, the more I realized that my journey uniquely positioned me to get into meaningful discussions with Concord Academy. There was so much alignment.”

Fairfax’s introduction to independent schools came when he was 15. He was shooting hoops at Narberth Playground in a bucolic Philly-area borough, where greats such as Kobe Bryant and Wilt Chamberlain once played, when he caught the eye of Brian McBride. The basketball coach and math teacher at the nearby Haverford School recognized his talent and asked if he’d consider switching schools. “I didn’t know schools like Haverford existed,” Fairfax says, “but when I visited, it was a remarkable place.

Fairfax was already accustomed to moving between the city and the suburbs. From his home in West Philadelphia, he had been catching two trains and two buses each way to attend St. John Neumann, a Catholic school for boys in South Philly, not far from the Passyunk projects where his mother had grown up. “My mom was paranoid that I had to make that trek every day,” Fairfax says. But he loved basketball and wanted to contribute to Neumann’s startup program. 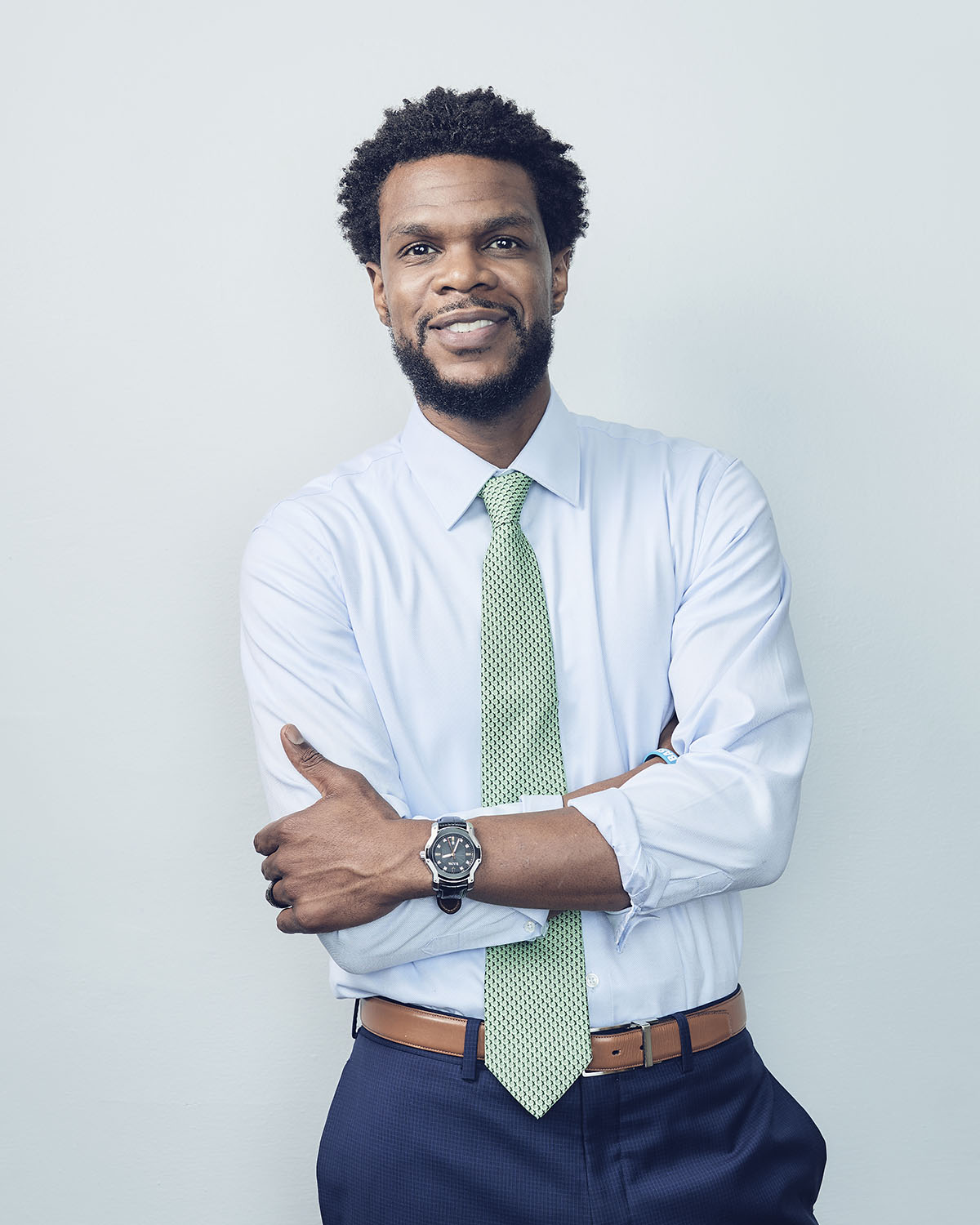 His freshman season was cut short, though, when he learned he needed open-heart surgery for a congenital heart defect. “I wonder if I had played my first year at Neumann if I would have even considered the Haverford School,” Fairfax says.

Fairfax transferred in November of his sophomore year, reclassifying as a freshman because McBride promised the academic program would be more rigorous. “He was right,” Fairfax says. “At Haverford, I really had to catch up and keep up. I had a lot of horsepower, like one of those old Mustangs, but my tires were flat. More than anything, Haverford inflated my tires and got the car going.”

Basketball was his catalyst, cultivating the skills of “focus, teamwork, dedication, and goal setting for a purpose greater than oneself,” he says. “I was really fortunate to be seen that day at Narberth. That day changed my life.” He became the first African American to be inducted into the Haverford School Hall of Fame. And his high school experience set him up for success at Drexel University, which he attended with a basketball scholarship. These transformational educational experiences set Fairfax’s compass as he charted a direct course into independent school leadership and swiftly became an influential and creative voice for access and growth.

HE’S NO STRANGER TO BREAKING GROUND:

AND THE FIRST AFRICAN AMERICAN BASKETBALL COACH WITHIN THE 300-YEAR-OLD INTER-ACADEMIC LEAGUE. 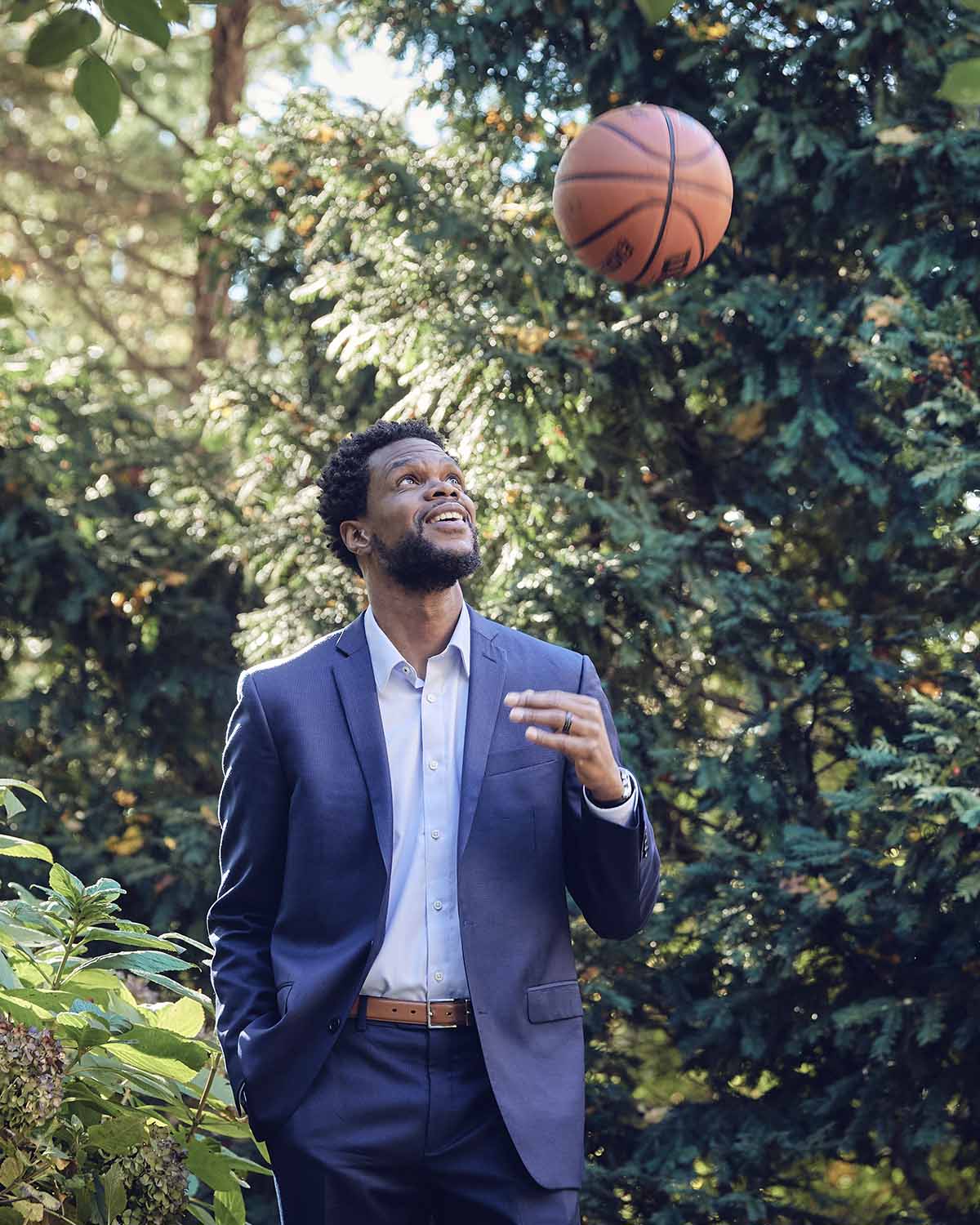 Basketball was Henry Fairfax’s way in to independent school education. Playing and coaching, he says, helped him hone the leadership skills of “focus, teamwork, dedication, and goal setting for a purpose greater than oneself.”

Leading with Partnership and Purpose

In 2003, Fairfax began his career in independent school education at the McDonogh School in Owings Mills, Md., a campus he describes as “a little like The Truman Show,” with lawns so manicured they felt unreal. There he coached JV basketball and middle school track, taught English, and served as an adjunct dorm parent. “I was connected in so many meaningful ways to the community,” he says, “and I fell in love with independent school education.” He was also deeply invested in directing McDonogh’s Foundations Program supporting first-generation independent school students.

In 2005, he began concurrently leading the Middle Grades Partnership (MGP) in Baltimore, a program that connects middle school students from public and private schools and provides academic programming, enrichment, and opportunities for leadership and civic engagement. He soon connected MGP with the Foundations Program to give more first-generation independent school students tools for success.

Fairfax returned to the Haverford School in 2008, joining the admissions office. By the time he was 30, in 2011, he had become Haverford’s director of admissions as well as head basketball coach. He was also completing the School Leadership master’s in education program at the University of Pennsylvania (for which he is now a university mentor) and co-chairing the National Association of Independent Schools People of Color Conference. That same year, he married his wife, Ivy. “That period of my career taught me to delegate, to trust, and to empower other members of the team,” he says.

One day, an assistant coach from Haverford asked him to attend the Philly All-City Classic, an all-star game that features the best players in the area. It was being held at Girard College in Philadelphia, and Fairfax was to be honored as a former All-City Classic MVP.

Girard is a tuition-free boarding school for underserved youth from grades 1 to 12 who live in single-parent homes. Its founder had spared no expense in appointing the secluded 43-acre campus, and when Fairfax arrived, he was mesmerized. “I fell for the mission,” he says, “for this incredible place in the middle of my city and the opportunity to provide access without worrying if a family could afford it.”

Offered a position as Girard’s vice president of enrollment management and institutional advancement in 2015, Fairfax accepted, eager to build back declining enrollment. He began developing strategic partnerships, including with the A Better Chance access organization, which moved onto Girard’s campus. “It set a precedent for us to think of our school as a community partner,” he says. “The more people saw our campus and heard our story, the more accessible we became and the more we began to grow.”

Fairfax was also instrumental in engaging the Revolution Project, a think tank aimed at modernizing education, in conversation about moving onto Girard’s campus. Those conversations led to Fairfax being recruited as Revolution’s founding head of school in 2018. Fairfax and his team built Revolution School— which is focused on experiential learning, community partnerships, and empowering students to co-create their academic journeys—handling everything from hiring and developing curriculum to determining strategies to give all students access. “How many chances do you get to start a school in the city you grew up in while being part of a larger conversation about what education can and should look like now and in the future?” he asks.

Revolution opened in September 2019, only a few months before the pandemic began, but its model of using the city as a classroom served it well during a transition to virtual learning. Under Fairfax’s leadership, Revolution earned its initial accreditation in record time and moved to a new, permanent home in Center City Philadelphia.

Fairfax has made a practice of studying transformational leadership, learning from, among others, Joe Cox, Haverford’s former head of school, who substantially grew and diversified the student body. “Our work in education is to be transformational, not transactional, and some of the best leaders have left legacies that have transformed the lives of students,” Fairfax says.

He says the first thing he learned at an independent school was “to pay close attention to the mission and make sure the mission is matched by the actions of the institution.” Concord Academy’s commitment to striving for equity compelled him. “That word ‘striving’ demonstrates an understanding of the sensitivities needed for this work,” he says. “I’m excited for what that orientation can mean for diversity, equity, inclusion, justice, belonging, and access. CA could be an inspiration for so many schools that are trying to figure this out.” 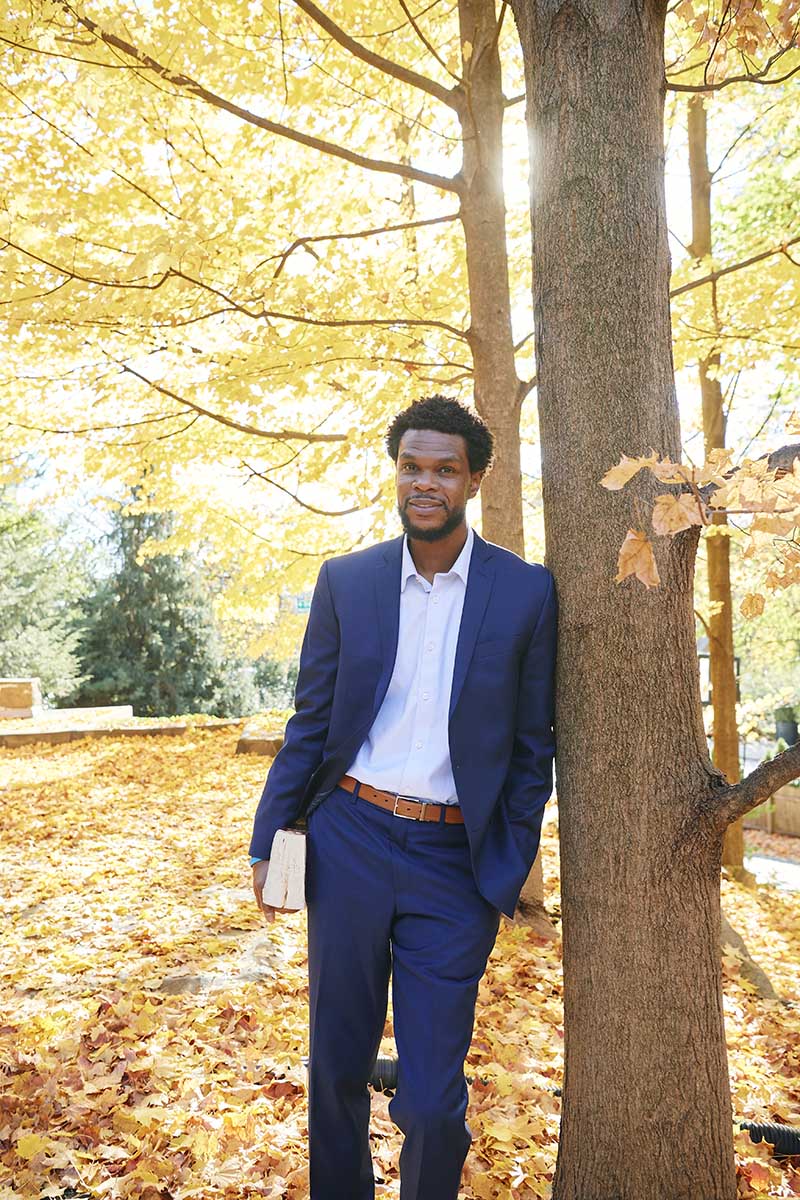 OUR WORK IN EDUCATION IS TO BE TRANSFORMATIONAL, NOT TRANSACTIONAL.”

While Fairfax took to the hardwood to express his own creativity, he values CA’s approach to the arts as inseparable from the academic curriculum. “That exposure is so important,” he says, “not only for students who will go on to be artists but for all students to have as inspiration.” Tracing his love of theater and music, Fairfax recalls how, as a child of 5 or 6, he would curl up behind an old Baldwin piano in his family’s home, listening to his older brother Ivan play what he later learned was Beethoven’s Moonlight Sonata. “He was prodigious with all things musical. I’ll never forget lying behind that piano and listening to Ivan do his thing and falling in love,” says Fairfax, who is proudly encouraging his oldest son, Bryce, 18, a passionate musician, to go into music production. “I will cherish any version of my role as head that will give me an excuse to stay close to these passions.”

Since his first campus visit in October, Fairfax has been reflecting on the many conversations he had at CA about collaboration. “I think my being a Division I athlete is a hint that I’m a fairly competitive guy,” he says, “but collaboration is at the root of the ability to compete at a high level.” He hopes to model the merits of both at CA.

And he is looking to the Centennial Celebration and the Centennial Campaign for Concord Academy as, he says, “chances to honor everyone in the room, to reflect on where we’ve been, take stock of where we are now, and imagine unlimited possibilities.” CA’s aspirations to grow its endowment to set the school on a path to need-blind admissions, as well as to invest in its campus and strength in the arts with a new performing arts center need not be mutually exclusive, Fairfax says. “How do we tell that story effectively?” he asks. “I’m constantly looking for ways to execute mission-specific objectives that are important to growth.”

A process-oriented, mission-driven leader, Fairfax has been reflecting on how his career has prepared him to lead Concord Academy in its 100th year. “My journey informs so much of the work that is set up for us at CA,” he says. When Fairfax assumes the role of head, he will keep in mind the difference teachers and leaders have made in his own life and lead with a focus on access. He will also build on lessons learned during the COVID-19 pandemic. “There’s not a person who hasn’t been deeply affected,” he says. “Our ability to listen with understanding and empathy is going to be essential to the success we have in meeting all of CA’s mission, and I’m really excited for that.” 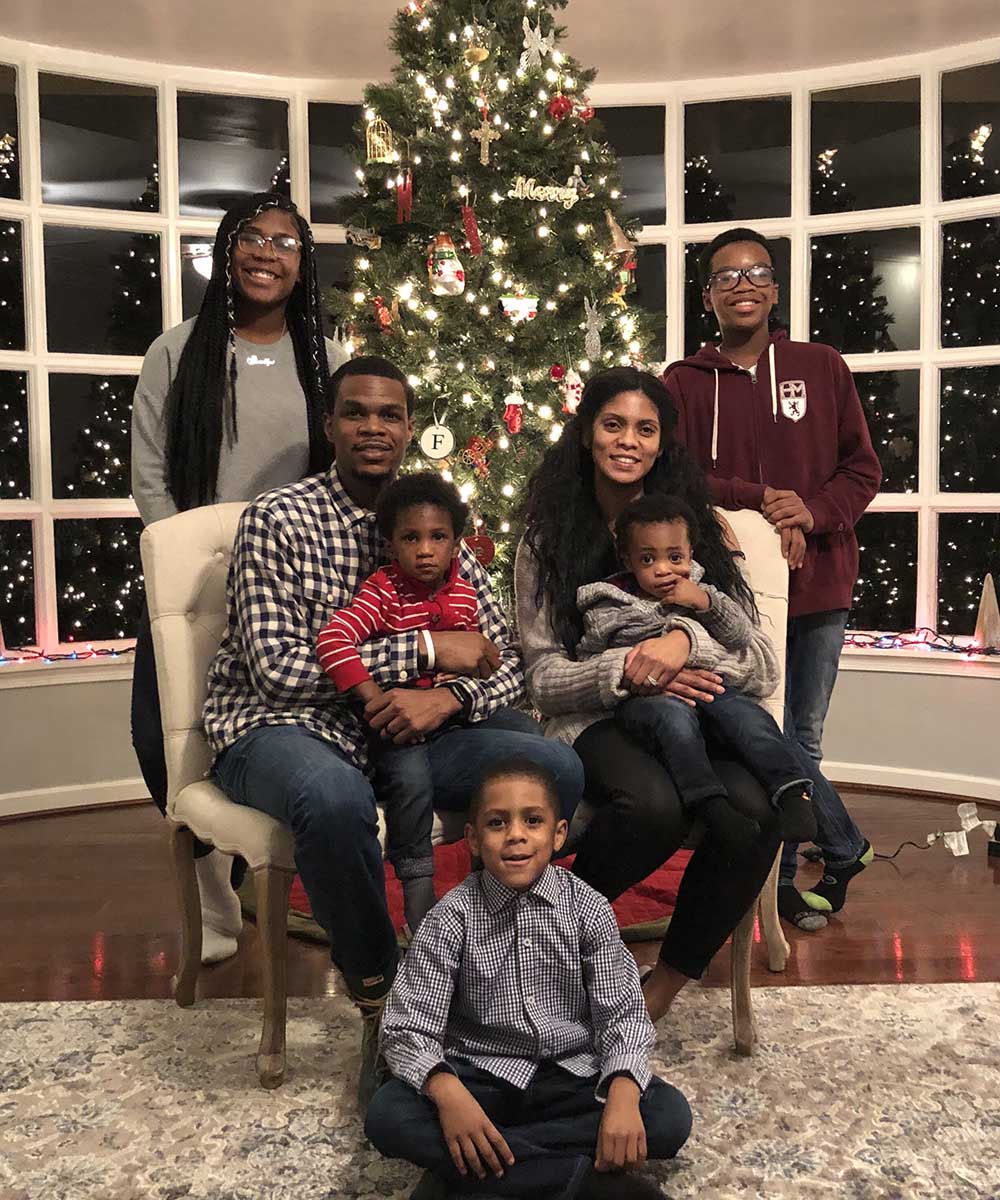 We look forward to giving Henry Fairfax, his wife, Ivy, and their children—Apollo, 4; Prime, 5; Cassius, 8; Bryce, 18; and Brooklyn, 19—our warmest CA welcome. 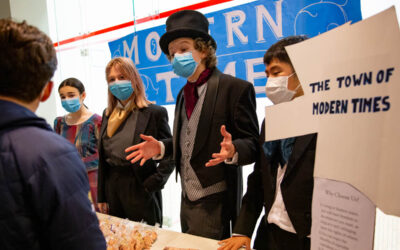 On December 2, students in Kim Frederick’s American Utopias history course transformed the SHAC atrium into an expo for 19th-century utopian communities. Drawing on extensive historical research and honing their presentation skills, they engaged a large audience during this immersive event. 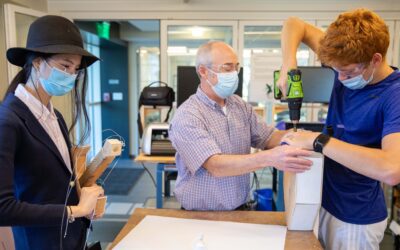 Musical Instrument Design is cross-listed in the Performing Arts Department and the Science Department and is co-taught by music teacher Nate Tucker and physics teacher Max Hall, providing an opportunity for interdisciplinary engagement. 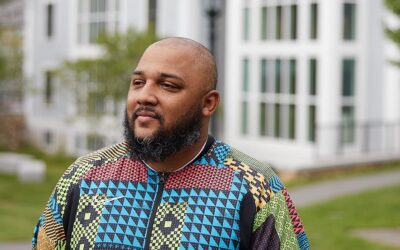