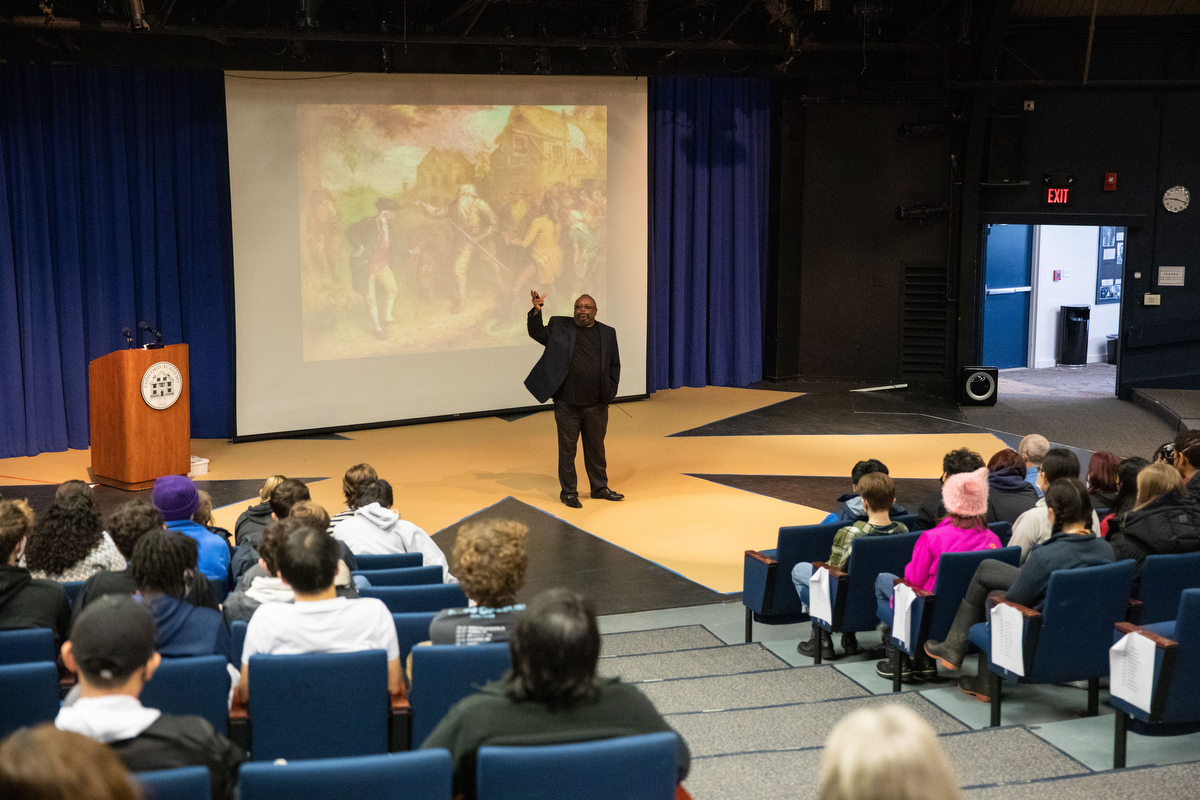 “How do we begin the hard work of self-reflection and opening our hearts to others we’ve been taught to fear?” Director of Community and Equity Grant Hightower posed this question during his opening remarks at CA’s Martin Luther King Jr. Day celebration on Monday, January 17. Throughout the day set aside for talks, group activities, and interactive workshops, students selected from a wide variety of opportunities to engage in learning and reflection—many of them led by Concord Academy students as well as faculty. CA also welcomed many guest presenters, including psychologist Dr. Charmaine Jackson, Izizwe Dance Collective, author Jennifer De Leon, art and social justice organization Elevated Thought, and artist and community organizer Golden.

Hightower and the Community and Equity Office organized this year’s program under the theme “Joy and Healing.” They asked the CA community to focus on creating spaces to learn about, participate in, and embrace the beauty and importance of reviving our sense of self-love, collective love, appreciation, and forgiveness. And they called on students to be active contributors and to center the relationship between joy and healing in communities and populations too often overlooked and underserved.

King’s legacy was a focus of many of the workshops, as well as a keynote talk by Ron Jones, the executive director of Dialogues on Diversity, a social justice theater company, who asked the CA community to consider King in a different light than his “I Have a Dream” speech. That famous address, he said, isn’t actually representative of the last third of King’s life, which Jones argued is most significant for our society today. Jones focused, instead, on the more radical Poor People’s Campaign, a coalition to challenge U.S. power structures that King was organizing when he was assassinated in 1968. Jones asked students to consider how they can use their influence to affect an issue they care about. In a dramatic enactment, speaking as a character who had lived through the civil rights era, he said, “When you take your power and you stand with the powerless, that’s when you change the world.

A Wealth of Workshops

The bulk of the day was given over to workshops that, in all their breadth, were rooted in King’s commitment to celebrating and liberating the human spirit. Students, faculty, and staff were invited to choose from more than 20 sessions on topics both historical and of the moment, ranging from racial miscasting in Hollywood to the queer community’s response to the AIDS crisis through art and activism. Teachers considered, among many other topics, classism in the U.S., white privilege, spirituals and jubilee songs from the Black American musical tradition, and the path to freedom and racial equality in South Africa. Some students presented what they learned at the Student Diversity Leadership Conference in the fall. Others examined how Isabel Wilkerson’s Caste: The Origins of Our Discontent sheds lights on American systems of oppression. And guest speakers shared their art and stories with a focus on human rights and well-being in the Black community. 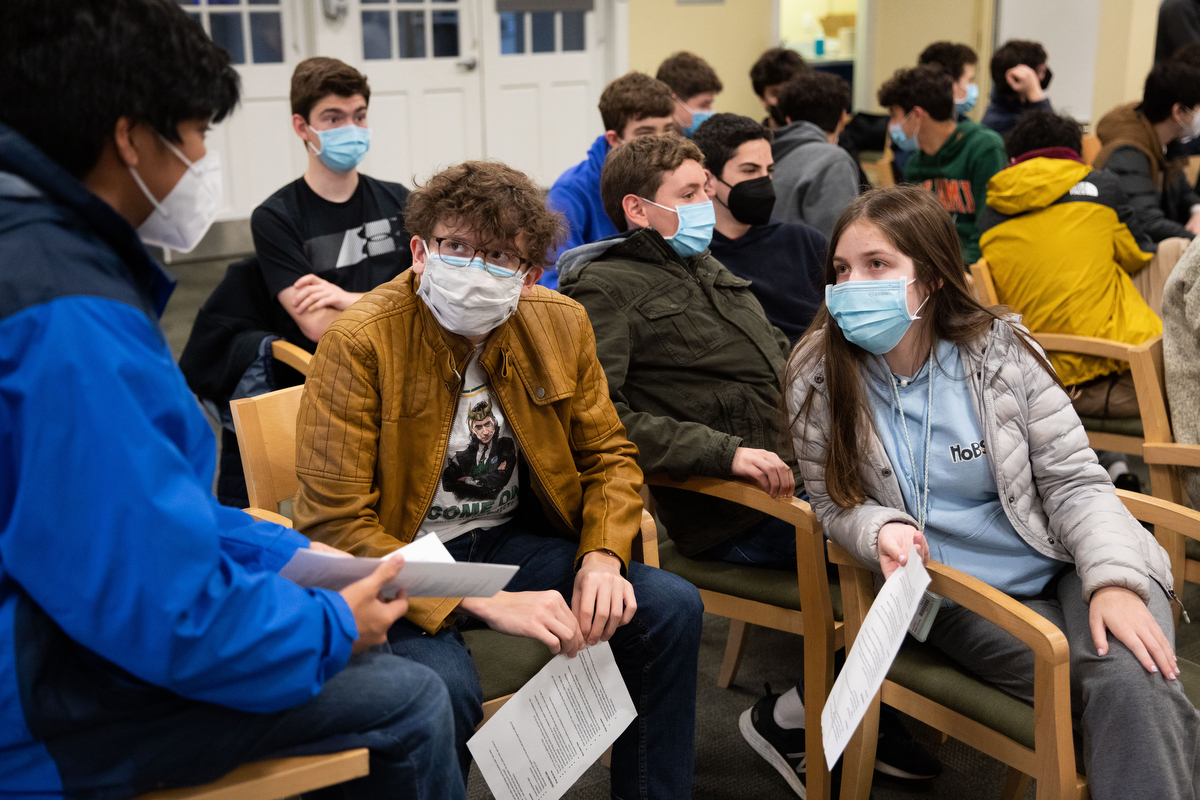 Students engaging in conversation at the System of Justice workshop on MLK Day.

Audeep Cariens ’22 led a workshop, System of Justice, in which participants compared the cases of Kyle Rittenhouse and Chrystul Kizer as a way to study the flaws of the justice system. This workshop was the second part of the Systems programming Audeep has been leading at CA. During an assembly in October, he gave a presentation, System of Economy, which explored the ways economic systems perpetuate oppression against marginalized groups and ways to fight this inequality. “I knew that the System of Justice presentation would be perfect for MLK day, tying together the work of MLK with the themes of the community-wide programming,” Audeep says.

Throughout that workshop, students engaged in nuanced conversation about oppression in the justice system. “Systemic oppression is always a difficult topic to understand, let alone to speak about publicly,” Audeep says. “I was really impressed that all participants were able to answer our questions and felt moved enough to speak with their peers.”

Hannah Wixom ’22 was similarly impressed by her peers during her workshop, Difficult Dialogues. Along with her advisor, Kim Kopelman, Hannah prepared a workshop that explored the components of productive conversations, even challenging ones, which bring participants closer together. “Having difficult conversations is an important way to grow as a community,” Hannah says. “I’m excited that we were able to continue dialogue around strategies for how to engage in productive conversations.”

All students took part in an activity designed and led by Umoja, CA’s affinity space for students who identify as Black or African American. They were divided into three groups, each trying to plan and develop the best school they could with vastly varying resources. Participants in one group had the freedom to approach a superintendent with funding requests; participants in another had to secure permission from the police to leave their areas, which were further restricted as the scenario progressed. Many students embraced the theatricality of the exercise, staging protests as their awareness of the compounding inequalities increased.

As always at CA, students were integral to the programming on MLK Day and directed their learning. Their leadership made for another celebration full of productive conversation and engagement in the spirit of Martin Luther King Jr.’s values.