On Monday, January 20, Concord Academy observed Martin Luther King Jr. Day with a program reflecting on Dr. King, the civil rights struggle, and the continuing efforts toward equity to which the CA community calls itself. Welcoming three guests to campus, CA students, faculty, and staff dedicated a full school day to the work of building community and striving for justice.

In his opening remarks in the Performing Arts Center, Head of School Rick Hardy addressed the disturbing rise in violence and injustice in the United States in recent years. He charged students and adults alike to consider changing society — building a more just nation — as action that begins with each and every one of us. “I believe that the way forward begins with a desire to know others,” he said, “to listen and to be aware, to seek understanding and even to risk misunderstanding, to confront difficult subjects and to engage in challenging conversations, all in an effort to see a point of view different from our own.”

This invitation led into the morning’s programming — a thoughtful and energizing keynote address, training sessions for adults and students, and affinity group gatherings — as well as several student- and faculty-led workshops throughout the afternoon. 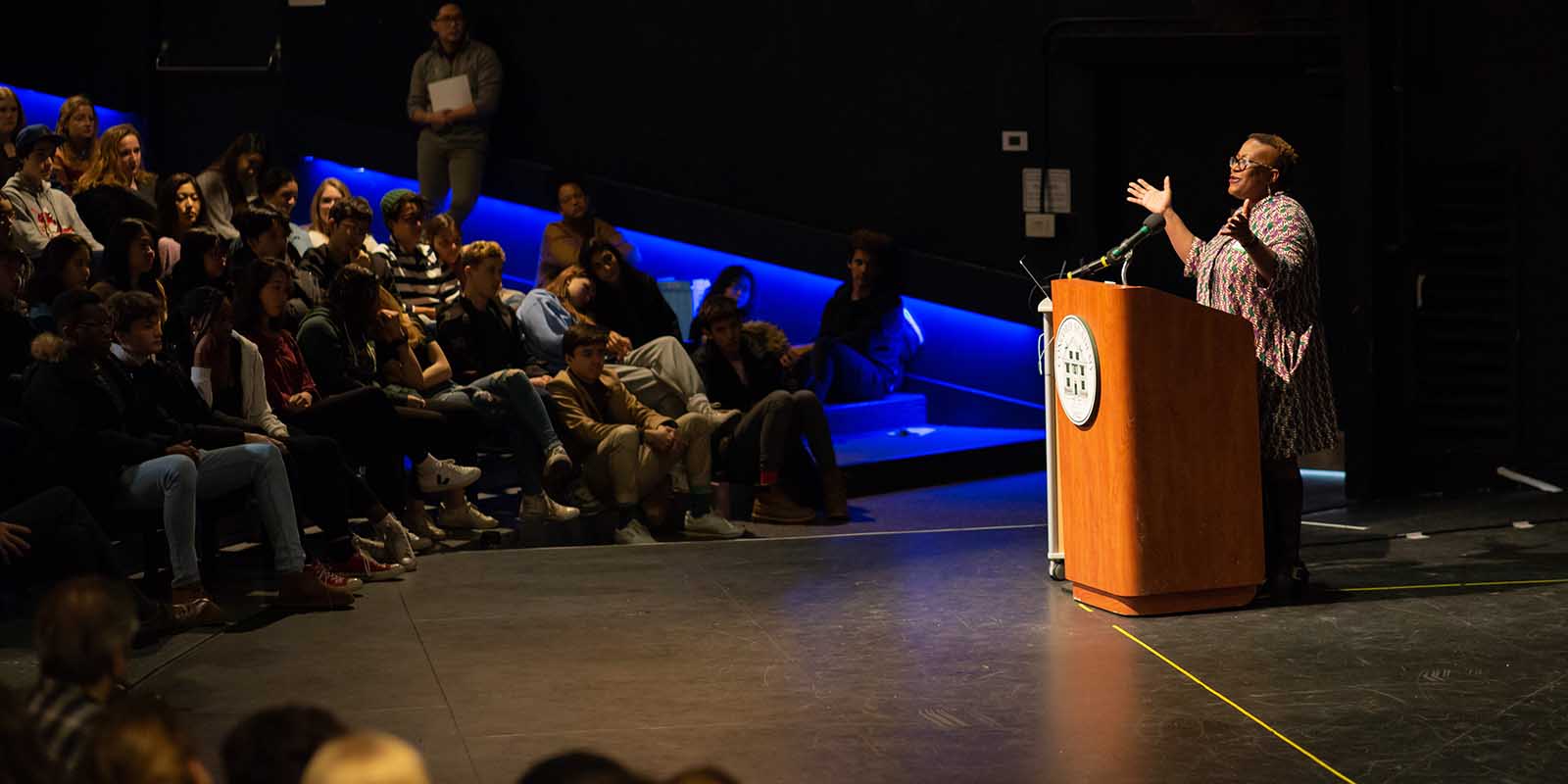 Taking the podium, Wanda M. Holland Greene was poised, expectant, and very quiet. Then, unexpectedly, her rich voice rang out in song:

Holland Greene begins nearly all her talks by singing, she said — in this case, “You Will Be Found” from the musical Dear Evan Hansen — because music brings an audience into a “shared psychological space.” The head of the Hamlin School in San Francisco, who served as a Concord Academy trustee from 2000 to 2008 while a senior administrator at the Park School in Brookline, Mass., used her keynote address to call attention to the problem of invisibility.

“I believe that all forms of bias and oppression, race-based or otherwise, have the same ugly root: invisibility,” she said. “If I do not see you, if you are lost to me, and I to you, if I deny your existence, if I fail to acknowledge your presence and your personhood, if I keep you at bay by only familiarizing myself with the general ideas associated with the groups to which you belong, rather than the particular stories that are yours alone, then I have given myself permission to withhold respect from you.”

“Invisibility fails to acknowledge your presence and personhood,” Holland Greened said. “It’s why visibility, and naming people, is so important.” She went on to tell several stories, some from her own life, some from our collective history.

On February 1, 1968, two ill-paid African American sanitation workers in Memphis, Tenn., were crushed to death as they rode in a garbage truck compactor. “I wonder if you know their names,” Holland Greene said. No one in the audience did, but they would now: Echol Cole and Robert Walker. The P.A.C. echoed with those names, repeated aloud by all.

Against a backdrop of public indifference, Cole and Walker’s colleagues organized a strike. The signs they wore called not for better pay or conditions, though both were sorely needed. They read, “I Am a Man.” This public cry for dignity and worth, Holland Greene said, mattered deeply, as a way of countering a deeply racist mindset rooted in centuries of slavery. The sanitation workers’ strike brought Martin Luther King Jr. to Memphis, where, despite knowing the danger he faced, he delivered his final exhortation, his “I’ve Been to the Mountaintop” speech, and was assassinated the following day. King, Holland Greene said, had asked himself not what would happen to him if he did but rather what would happen to the workers if he did not stop to help.

Making another feel invisible isn’t always deliberate, Holland Greene said — it’s easy to walk right by others — but that’s no reason to bypass self-examination. She told about how, as an undergraduate at Columbia, she was so caught up in rushing back to win an argument with an entitled classmate that she failed entirely to see or acknowledge a fellow black woman, a cleaner in the bathroom. Thinking she had intentionally ignored her, the woman called her out. Her face, her voice, stayed with Holland Greene. She became the subject of a personal essay Holland Greene wrote, which resulted in her graduate school tuition being fully paid. “I have that woman to thank,” she said. “I wish I could see her and thank her.”

In turning from being lost to being found, Holland Greene focused on empathy — not as an end in itself but as a skill that “leads from listening to action,” a tool for creating a more just society. “When it comes to empathy, CA, you are way ahead of the game,” she said, “because this school is built on stories.”

Holland Greene shared her experience with an interdisciplinary virtual reality experiment called “1000 Cut Journey,” created by Courtney Cogburn, an assistant professor at the Columbia School of Social Work, that allowed her to see herself as a young black boy growing into adulthood. She spoke of the limitations she has to place on her own African American sons, fearing for their safety.

“Real empathy, and pushing yourself to understand what it feels like to be in the shoes of another, it requires you challenging your very own views,” Holland Greene said. She asked students to move from being “not racist” to antiracist, from being allies (which may involve only passive support) to being accomplices, willing to take action on others’ behalf.

Referencing CA’s recently revised mission statement — which she claimed “beautifully aligns with Martin Luther King’s dream” — she said, “I believe you will cultivate empathy, integrity, responsibility. I believe that you will build a more just and sustainable future.” 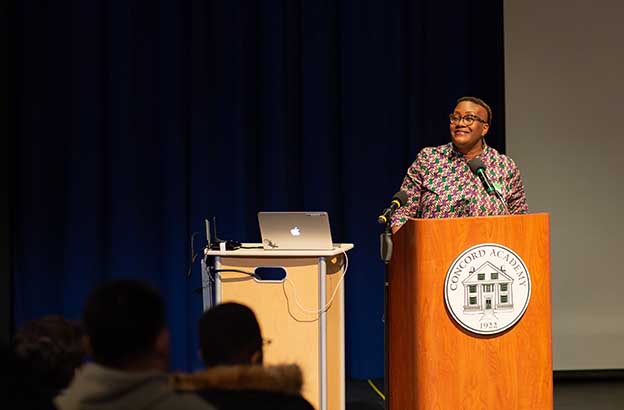 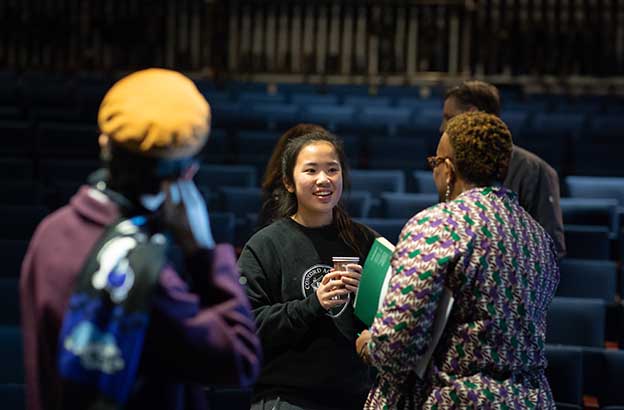 Following the keynote address, Holland Greene met with CA adults of color in the Mendenhall Common Room. Osamagbe (Osa) Osagie, director of equity and inclusion at the Carroll School, spoke with CA students of color in the SHAC while faculty who had completed Shelly Tochluk’s Witnessing Whiteness curriculum engaged white students in an exercise to help them understand racial identity development according to Beverly Daniel Tatum. And Jenna Chandler Ward, co-founder of Teaching While White, facilitated sessions with CA’s faculty and staff around white identity and antiracist work.

The afternoon was given over to a series of workshops led by both students and faculty. Topics included identity exploration and deep listening, mass incarceration and wrongful convictions, classism, language extinction and the loss of minorities’ voices, and environmental racism in Massachusetts, to name just a few. The historical drama troupe Theatre Espresso, whose artistic director is CA theater teacher Shelley Bolman, presented The Trial Anthony Burns, focused on a challenge to the Fugitive Slave Act of 1850. The day’s impactful special programming unfolded thanks to the work of the Community and Equity team, the C&E student co-heads, the members of the Diversity Committee, and many more.