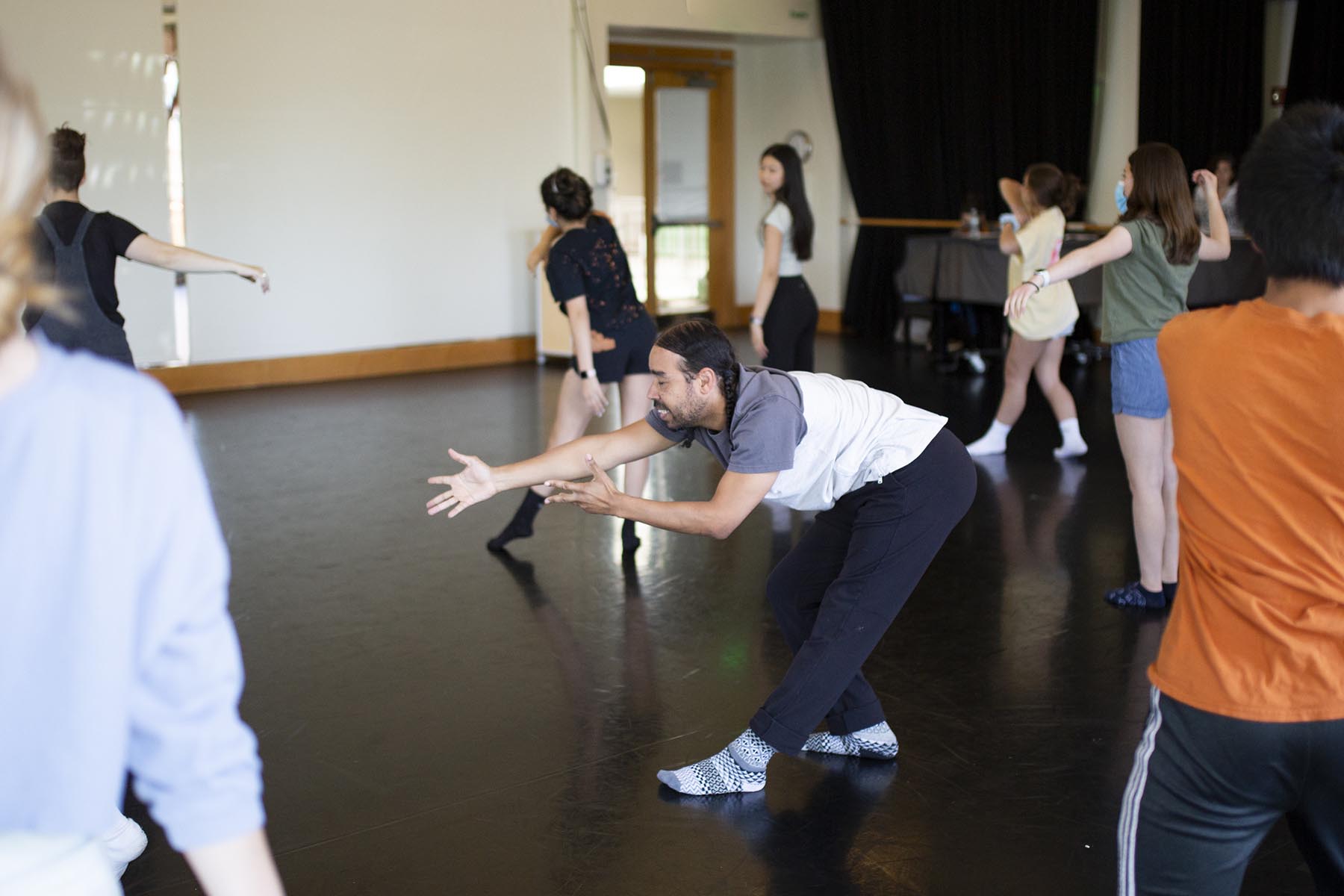 Rashaun Mitchell ’96 engages with CA students during an improvisatory movement workshop during his Hall Fellow visit.

“There’s no wrong way to move,” Rashaun Mitchell ’96 tells the CA students taking his workshop. Some are experienced dancers; others are exploring movement for the first time. They’re in the dance studio at Concord Academy during Mitchell’s visit in May as the 2022 Centennial Hall Fellow, and he is drawing on his experience as a dancer, choreographer, and educator. He asks them first to respond to visual cues in the room. “What draws your attention?” he asks. “Notice if what you’re looking at changes anything about your posture.”

After the students engage with their eyes, they begin tracing shapes in the air with their fingers, then their chins, elbows, knees, and toes. “Let the quality of the thing you’re looking at inform your movement,” Mitchell instructs. The students look at stage lights and curve around, at windows and square off, at scuff marks on the floor and swoop through space.

“What happens when I’m watching you,” Mitchell tells them, “is that I see your attention and how it’s working.”

Next, he splits the students into two groups: half encircle the room and begin tapping walls, scratching window screens, clapping, ticking, pounding, shuffling; with eyes closed, the other half respond to the sounds. Some contract then stretch outward. Others sink to the ground, bolt up again.

“That was nuts!” exclaims one student afterward, who likens the experience to the animation of the monster in Mary Shelley’s Frankenstein—the body moving as if being controlled by some other force.

“Yes!” Mitchell responds. “You’re not making it happen. What you’re feeling is what your body is telling you to do.” He explains how our brains can get in the way of receiving information, and he encourages students, if they’re feeling safe, to move toward what feels difficult.

He ends the workshop with what he acknowledges is an impossible request: for each student to recall and repeat all the movements they’ve made so far, then stitch them together into a short sequence. The students are game to try, and their sequences, interspersed with new movements Mitchell introduces, are somehow both a collective, flocking action and intensely individual.

Exposing the Mechanics of Creation

This sort of improvisation is not only a teaching method. The experience Mitchell shared with students at CA is similar to, if much simplified from, the process he engages in with his professional collaborators. For Mitchell and his partner, Silas Riener, primarily improvisatory dance is an ongoing practice. It’s orientation by sound, or vocalization; by objects, or space; by protocols to negotiate that space with other dancers; by rules but also the ability to break them. It’s also performance.

“This is what I’m interested in seeing,” Mitchell told an audience of CA supporters during his visit. “I am the audience of the thing I’m making.” The evening before his Hall Fellow Lecture and workshop with students, he spoke with faculty and staff, former teachers, trustees, volunteers, and other friends of Concord Academy about his work in creating dance that has the power to evoke, shift, dislodge—to change perceptions.

Since 2010, in a thoroughly collaborative partnership, Mitchell and Riener have created more than 25 multidisciplinary dance works together. After first meeting as dancers in the Merce Cunningham Dance company, together they are creating new vocabularies for what is known as polymodal dance, or performance in response to spatial environments. Over the past five years, they have been choreographing a set of improvisatory practices called “Desire Lines”—the title derives from a term used in landscape architecture to refer to alternate routes that deviate from a prescribed path. The first iteration took place with 13 dancers over a two-week residency in Madison Square Park in New York, which culminated in a daylong improvised performance. 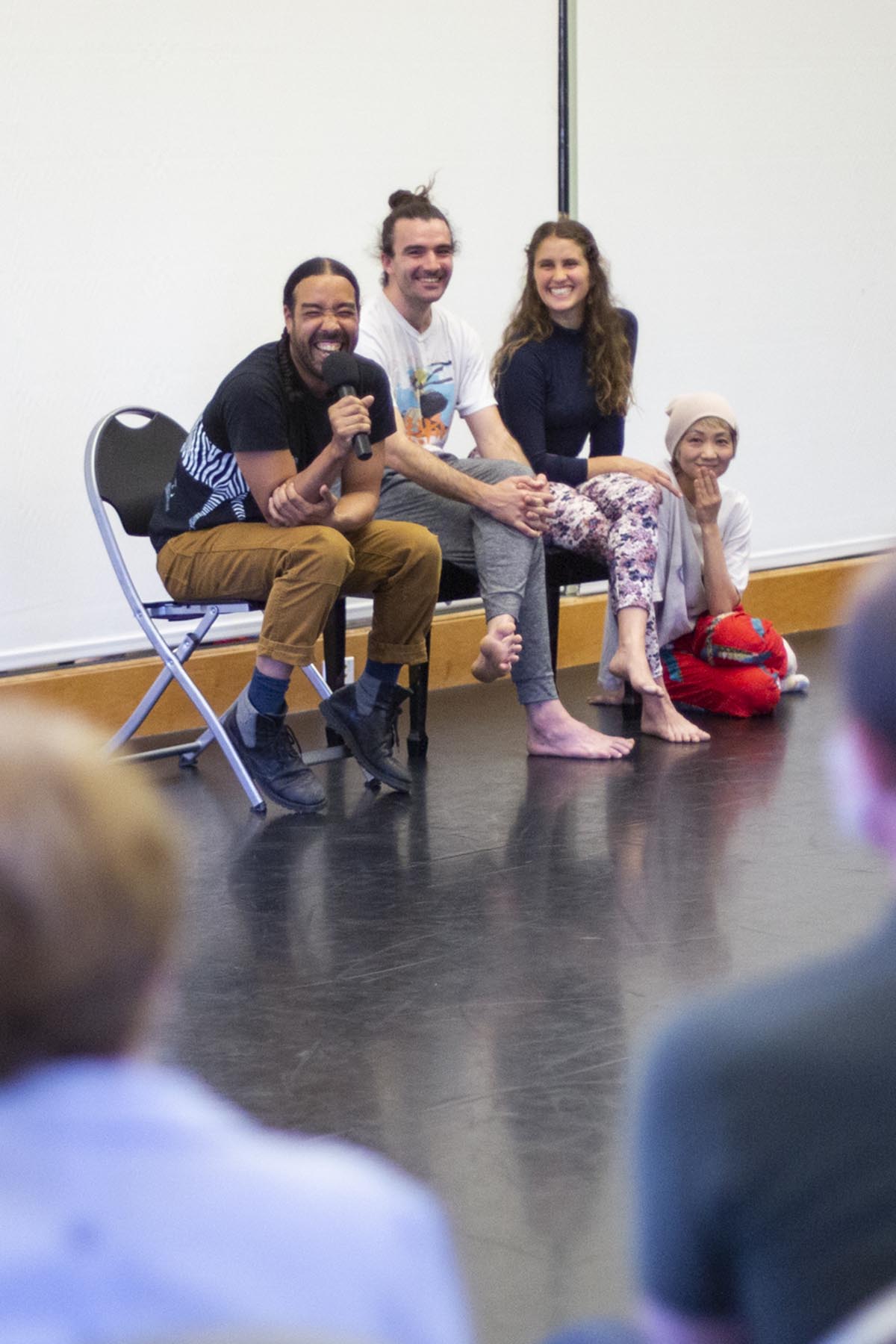 Mitchell answers questions about his choreography at a Hall Fellow event at CA.

“To have dancers authoring their own experience, that’s very important to me,” Mitchell said at CA. “I really hate telling people what to do.” Instead, he creates proposals for what could happen, always with avenues for refusal. “There’s a beautiful tension in that, a surprising element,” he said.

With demonstrations by dancers Riener, Mina Nishimura, and Jennifer Gonzalez, Mitchell walked the audience through what he called three “modalities,” or protocols for negotiating space in collaborative improvisatory movement, from the show “Retrofit,” the latest iteration of which the group performed just a few weeks prior in New York. The rules engage dancers in responding to both internal and external stimuli, with restrictions on the type of movement they make—verticality, symmetry, pace, height—and in response to, and repetition of, other dancers.

For Mitchell, performance doesn’t aim to evoke particular reactions or emotions or tell a story. “Desire Lines” is performed in silence, with only the dancers’ vocalizations and ambient sounds. “I’m not working with narrative; I’m not working with music,” he said. “We’re really trying to understand what is happening in the body when we’re dancing and how we can expose the mechanics of the creation of what we’re doing.”

The process of recalling and synthesizing movement, which Mitchell enacted with CA students, is also an element of the group’s professional practice. “It’s interesting to watch the brain try to complete an impossible task, to make choices and try anyway, to collect what sticks,” Mitchell said. “It only happens in the moment.” It’s a practice that has allowed him and his collaborators to develop a shared language, and to read one another.

Riener described how the protocols came to be developed. “We’ve gained clarity after many, many rounds of this,” he said. “Seeing how different kinds of people challenge the rules, or don’t, is extremely revealing of your psychic space. It’s been a really rich thing to watch people engage or disengage.”

“This project really liberates me from my own decision-making,” Nishimura added. “When I’m focused on noticing, it’s different for me than making action happen. This thing is making me move; it’s making the decision for me. I’m already moving before I’m thinking.”

Performances such as “Retrofit” usually unfold over hours—an entire day—with the audience free to come and go. Mitchell likened the experience to viewing a Magic Eye stereogram: Initially a pattern can barely be detected in a difference of colored dots, but when the eyes adjust, a three-dimensional picture emerges. Audience members frequently describe a slow unfolding of awareness and reflection on the practice they have watched that shifts their own interactions with their surroundings. 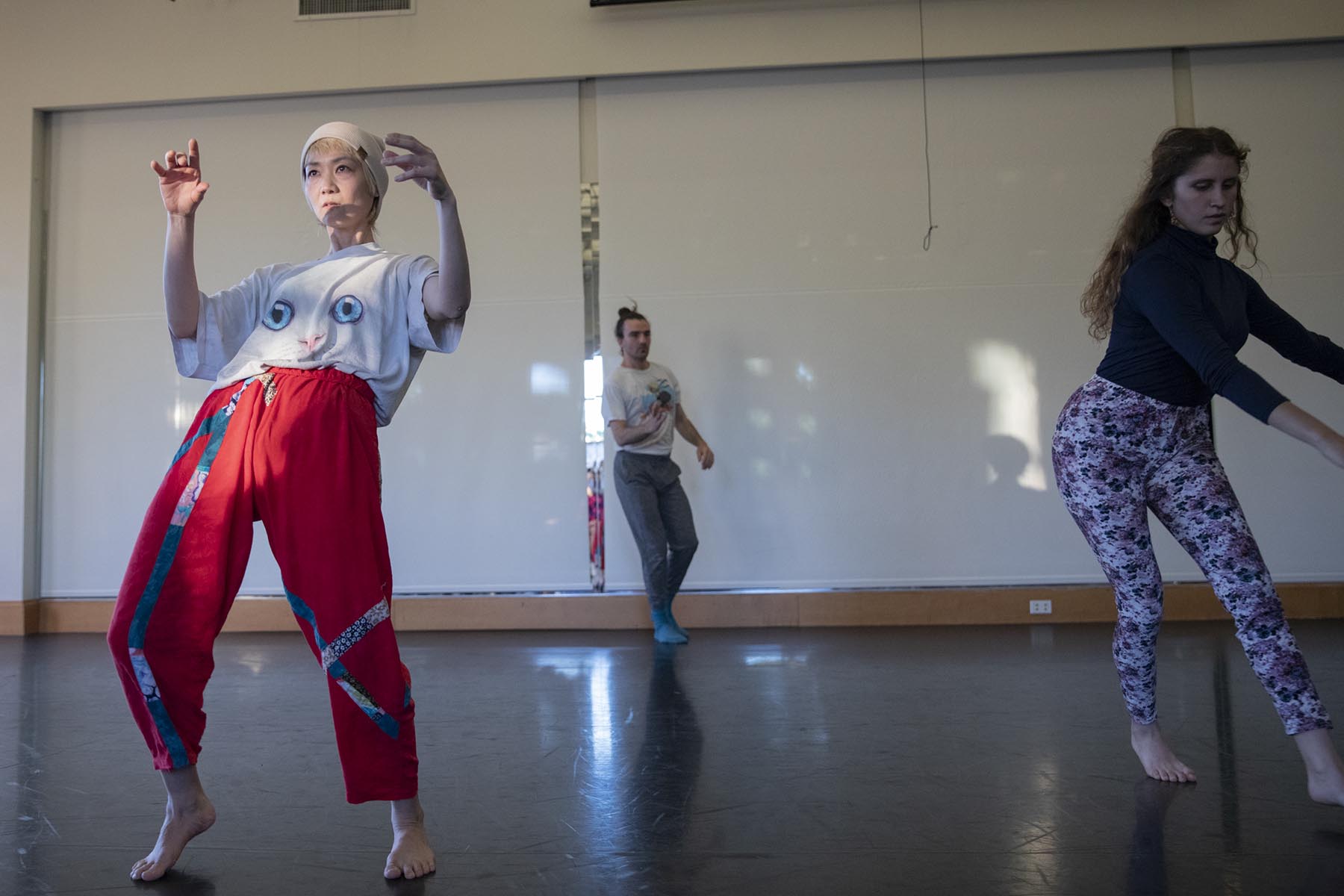 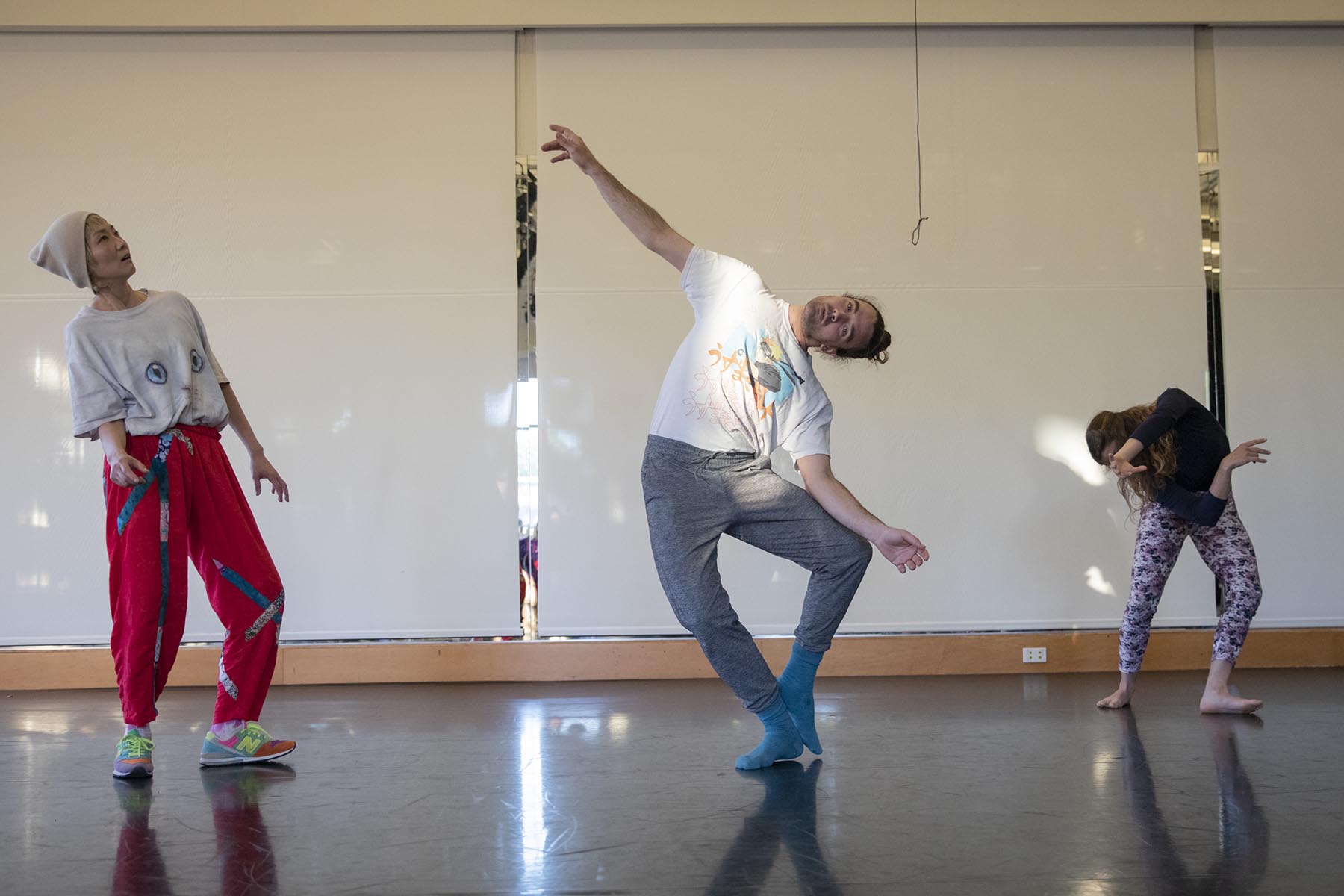 In his Hall Fellow Lecture, Mitchell described himself when he first came to CA as a “gawky and overzealous 13-year-old” who wanted to do everything. He did, pursuing acting, photography, soccer, lacrosse, and roles in student government. Concord Academy was also where he began his dance training, at the relatively advanced age of 15. Though he was initially intimidated by other students with years of lessons behind them, he said, “I was late to the party, but I was welcomed with open arms.”

Introducing Mitchell at the evening event, recently retired CA dance program co-director Amy Spencer P’13 described first seeing him looking in through the dance studio window, watching what was happening from the outside. “From the moment he stepped into the studio, it was very clear that Rashaun had a level of body intelligence that was undeniable and truly unique,” she said, “and alongside it, a curious mind.”

Mitchell didn’t start considering himself a dancer or choreographer until much later in life, though. Coming to CA as a young Black boy from the South, he had no models for a career in dance. But he approached the discipline with  tolerance for discomfort and openness to new ideas. At CA, working with Spencer and her husband and dance program co-director Richard Colton P’13, he was encouraged to learn many styles of movement and to create his own. His first exposure to an eclectic mix of skills and ideas, he said, came in “an environment where experimentation was the goal rather than a point along the way to a more ideal destination.”

He attended Sarah Lawrence College for its strong dance program, and also for its inclusive environment—an audition wasn’t required. There he studied poetry. He also studied with the legendary choreographer Viola Farber, then in her late 60s. Because she couldn’t fully demonstrate with her own body, Mitchell found himself, at first, at a loss to learn her movement. But eventually, he said, her “demanding presence” stirred him into “making decisions about movement that were no longer based on forms of imitation.” He began as an imitator; the next year, he was the one others imitated. By the time he graduated, he was certain his career would be in dance. 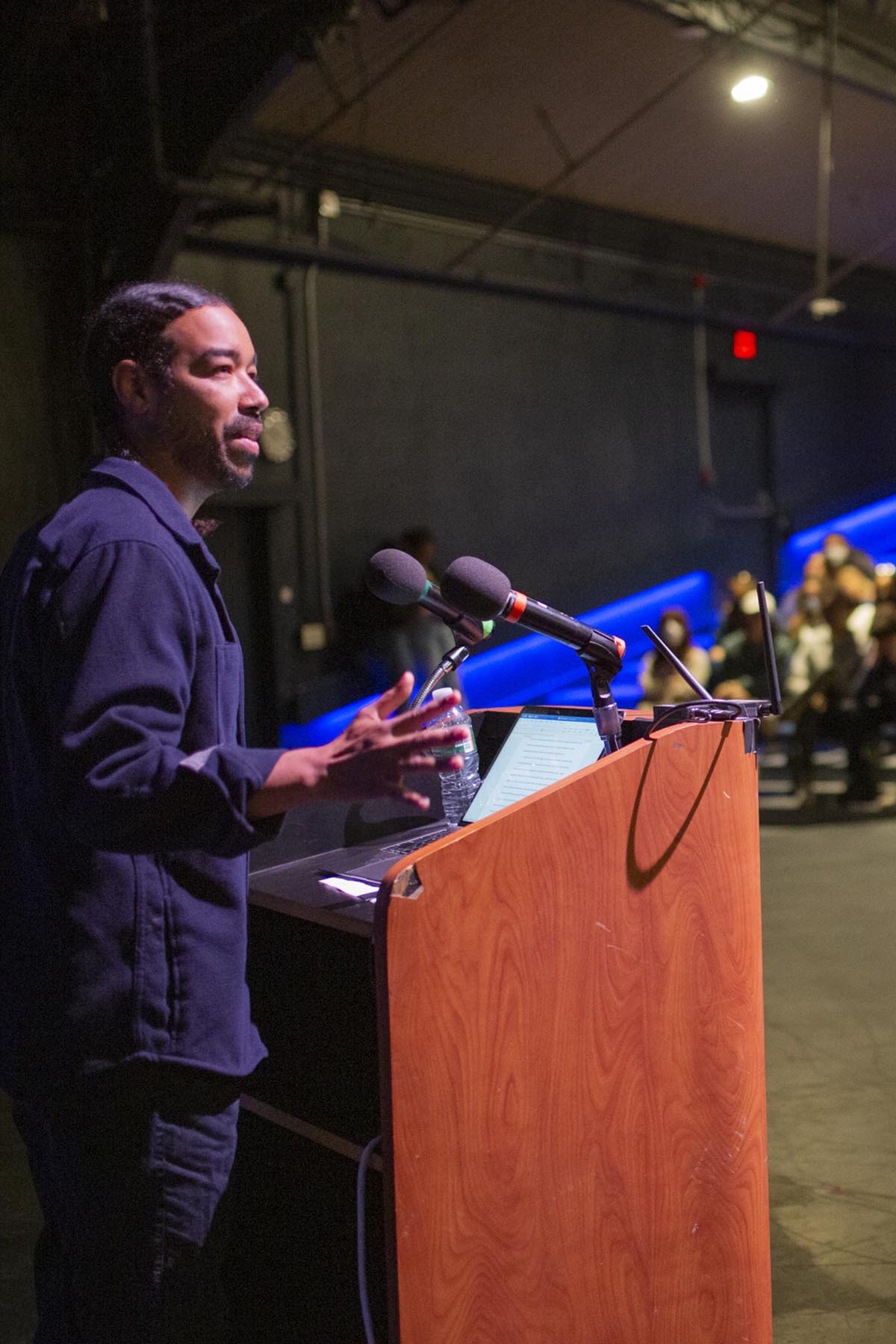 Learning in a place of instability can trigger profound insight.”

“Learning in a place of instability can trigger profound insight,” Mitchell said. This he also experienced in his 10 years dancing for Merce Cunningham and renegotiating his own relationship to failure and success. In hindsight, he said, he has recognized that formative experiences “emerged out of places of uncertainty and newness, where a paradigm shift or ideological shift was necessary for me to be able to absorb new information.”

Mitchell has achieved some of the highest accomplishments awarded to dance artists, including a 2014 Guggenheim Fellowship and two “Bessies”—New York Dance and Performance Awards—the first in 2011 for sustained achievement in the work of Merce Cunningham since 2004 and the second a year later for “outstanding emerging choreographer.” His choreography has been presented in numerous venues in New York and throughout the East Coast. Mitchell also began teaching, joining first the faculty at Sarah Lawrence and later, as a full-time professor, NYU Tisch School of the Arts, until he stepped away in 2021.

When the pandemic shut down the world, performing arts communities were cast adrift. “My entire world collapsed,” Mitchell says, “as it did for many of us.” Having lost a sense of purpose, he shared, he saw his artistic career slipping away. After a long lapse of creativity, he found that energy emerging in other actions: gardening, relationships, and writing.

So in addition to a selection from his 3D dance film, “Tesseract,” what he shared with CA students during his Hall Fellow Lecture was an essay he’d been working on—a way he has been wrestling with expectation versus inner desire and with the discovery that “time apart, time alone, time away from ‘work’ has focused the artistic experiment.”

When students had an opportunity to ask questions, one asked for guidance on working across multiple art forms. “Try everything, because everything is related to everything else,” Mitchell said. As with many artists he knows who work interdisciplinarily, Mitchell does more than dance and choreograph. He also creates scores and visual, costume, and set design. “Use whatever is available to you,” he said, “You might find the particular thing that you want to express is better suited to one form or another.”

Another student asked Mitchell if he always has a strong idea of how he wants his art to impact a viewer. Never,” he replied. “No, for me, making art is a place to get lost, to search, and so every time I go into a new project, I try to start from scratch and see where it might lead me.”

For nearly 60 years, the Hall Fellow Endowed Lectureship has brought distinguished individuals to Concord Academy to share their work and wisdom with the CA community. The Concord Academy Board of Trustees established the lectureship in 1963 to honor the extraordinary legacy of Elizabeth B. Hall, CA’s headmistress from 1949 through 1963.