As managing partner of SHoP, the internationally renowned New York City architectural firm she co-founded with her husband, among others, Kimberly Holden ’84 spent most of her 30s and 40s earning acclaim for her company’s design portfolio.

But with the onset of her 50s came some unanticipated life changes. Her marriage ended, and with it the professional partnership. Leaving behind the firm she’d helped grow from its original team of five to more than 200 employees, Holden allowed herself a six-month sabbatical to contemplate next steps. “I wanted a big change but didn’t know what it would look like,” she recalls. “Architecture can be very ego-driven, and that no longer felt like me. With everything going on in the world, I yearned to do something that made more of a difference.”

One of the charitable organizations SHoP had supported on a pro bono basis was Kids of Kathmandu, for which Holden’s team had designed schools to replace structures destroyed in Nepal’s devastating 2015 earthquake. During her sabbatical, Holden traveled for the first time to see the region and the people she had assisted, visiting the schools she’d designed and helping to coordinate health and education initiatives for local women and children. The journey left Holden certain that she wanted her next career to focus on the empowerment of women and girls.

With her self-allotted sabbatical nearing its end, Holden took one final sojourn before returning home — this one to the coast of Maine. Sitting on the rocks overlooking the surf, she thought back to the life experiences that had most empowered her, and memories came to mind: the births of her daughters Vanessa, now 16, and Emilia, now 12. At both births, she says, the support provided by her midwife, her doula, her husband, and her sister Betsy Holden Thompson ’87 left her feeling like “a goddess, a superhero.” 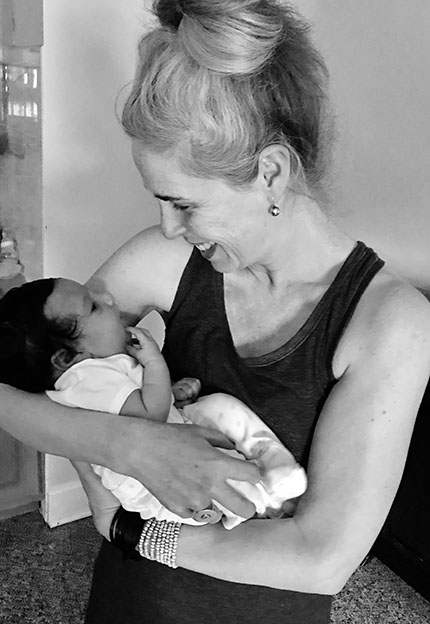 “It was like a light bulb went off,” she says. “I didn’t want to go through the extensive training to become a midwife, but what about a doula?” Holden knew from her own experience that doulas cover a nonmedical function, providing physical and emotional care to the mother throughout labor and delivery and into the postpartum days or weeks. “But above all,” Holden says, “being a doula is about supporting a woman’s choices and empowering her to advocate for herself within her birth environment.” Back home in New York, Holden began putting the pieces in place. She undertook training to become a certified birth and postpartum doula as well as a lactation counselor, then she launched her own company, called Doula X Design.

“Now I’m helping one woman at a time, one family at a time.”

As the name implies, Holden draws upon numerous skills from her first profession to fortify her second. “One of my roles is to help create and hold a safe space for the laboring mother,” she says. “In a hospital setting, that means meeting the challenge of transforming a fluorescent-lit institutional room into a calming, soothing setting. That might involve battery-operated candles and essential oils; it might mean ensuring that the noise level in the room stays low. It means honoring and protecting the laboring woman’s wishes about who is in the room and keeping out the 10 residents who want to watch her delivery, if that is her preference. It’s a different kind of space planning from what I did before, but the skills are transferrable.”

She points as well to the mentoring skills she practiced as a managing partner at the architectural firm, where in the last decade many of her employees were younger women looking to her for guidance on work-life balance. Even some of the early talents for which her CA classmates might remember her — ballet and photography — play a part in her new career, as she encourages movement and physical release through dance for laboring mothers and plans to add birth photography to her portfolio of services in the future.

Through her work supporting the physical and emotional needs of new mothers and their partners, Holden has found the spiritual fulfillment that she sought when first contemplating a departure from architecture. Before becoming a doula, she says, “Whenever I thought about what had been going on politically over the past few years, I felt frustrated by not being able to do more. Yes, I could canvass, donate to causes, attend rallies. But I knew I was never going to be the leader of a political movement. But now I’m helping one woman at a time, one family at a time. And when women are empowered to be strong and healthy in their roles as mothers, society as a whole benefits.”