The Community and Equity assembly on November 15 was a high point in this year’s 30th-anniversary celebration of Concord Academy’s GSA. Formerly the Gay-Straight Alliance, now known as the Gender Sexuality Alliance, this revolutionary safe space for LGBTQ+ people and allies was the first high school organization of its kind. Three decades after Kevin Jennings, then a CA teacher, catalyzed the GSA’s founding, Concord Academy warmly welcomed him back to campus.

In the words of GSA co-head Owen Elton ’19, as an activist on behalf of LGBTQ+ and immigrant communities, Jennings has “paved the way for LGBTQ+ history and education in schools; worked tirelessly to spread the importance of giving queer youth a welcoming, safe space; and dedicated his life to combatting bigotry and promoting equality and social justice.”

“We’re grateful today to have a number of openly queer teachers here,” Elliot White ’19 said in a joint introduction. “Kevin’s story serves as a reminder of the fear and bigotry that people, even in a liberal setting, had to overcome.” Jennings’ talk also shone a light on the great strides the LGBTQ+ rights movement has made, in order to give strength to the next generation for work yet to come. 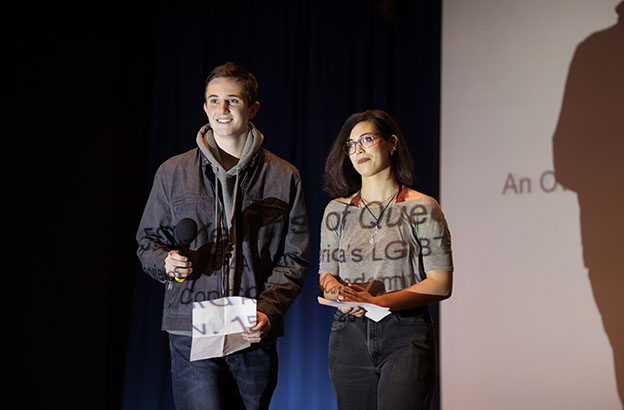 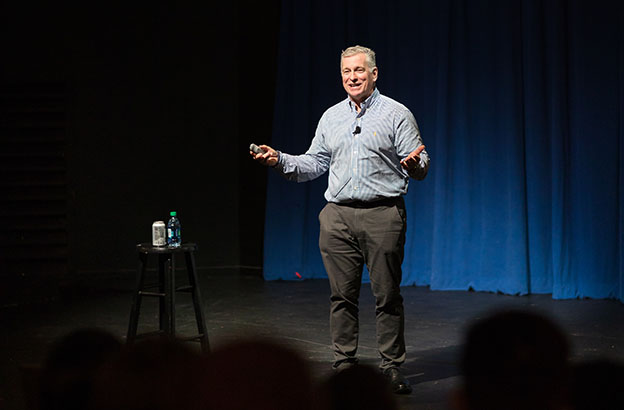 Jennings had just 40 minutes to share a broad history lesson entitled “500 Years of Queers: An Overview of America’s LGBTQ History.” He did so energetically, employing an educator’s seasoned instincts for engaging with complex subject matter and knowing when to get personal. His talk was adapted from a presentation he used to deliver in schools around Boston for LGBTQ History Month (which Jennings helped create). At CA, he demonstrated why knowing this history matters.

“Lesbian, gay, bisexual, and transgender people are not newcomers to the North American continent,” Jennings said to begin his lecture. “Prejudice against them is.” He discussed the two-spirit people among Native American tribes who fulfilled a sacred spiritual role for their communities. The indigenous North American attitude contrasted greatly with views brought by the Puritans, dating back to the Massachusetts Bay Colony in the 1640s, when nine of 15 capital crimes involved sexual acts. By the 1700s, sodomy laws were common. In the early 19th century, the Industrial Revolution transformed agriculturally based expectations of family life, allowing city dwellers to opt out of marriage, and creating the first gay communities in Western history. Same-sex households became so common in this area that they were known as “Boston marriages,” though partners, unacknowledged in textbooks, were often written out of history.

Most people think the gay rights movement started very recently,” Jennings said, “but the first American gay rights organization started two years after CA was founded,” nearly a century ago. Inspired by German activism, Henry Gerber founded the Society for Human Rights, in 1924 in Chicago. It took astounding courage at a time when gay people risked incarceration in mental institutions; police persecution quickly disbanded the society. During World War II, military service brought together individuals previously isolated in small rural towns and created larger gay communities. Still, the 1940s ushered in a policy that no longer allowed homosexuals to serve in the military — a rule that persisted until its repeal during the Obama administration after more than 150,000 people had been expelled. Similarly, Jennings covered the 1953 lavender scare, when gays were viewed as inherent security risks in the U.S. fight against communism. An executive order made it illegal for them to work in the federal government — an order that was not repealed until 1995.

Jennings discussed the founding of the first ongoing gay rights organization, the Mattachine Society, in the early 1950s. Its magazine, One, became the American journal of LGBTQ+ rights, following a Supreme Court decision that allowed the mailing of materials mentioning gays (previously deemed pornography). Jennings spoke about Bayard Rustin, an openly gay civil rights activist whom Martin Luther King Jr. chose, over objections, to organize the March on Washington, and the subsequent employment of nonviolent civil disobedience by gay rights activists. Spontaneous resistance also erupted at a time when it was still illegal to be gay, such as in the 1969 Stonewall Riot in New York, whose legacy has evolved into the pride parades that take place around the world every June. It was the beginning of the gay liberation movement in America, a movement that made the world a very different place for Jennings than it had been for another member of his family.

Jennings didn’t learn until he was in his 40s that his uncle Mickey had been gay — and that he had died from alcoholism when Jennings was 5 years old. “Had I been born in 1915 in Fall River, Mass., this might have been my life,” he said.

Jennings talked about the AIDS crisis in the early 1980s that claimed the lives of thousands, including his first boyfriend, his college roommate, his best friend, and his college advisor, and the formation of ACT UP (the AIDS Coalition to Unleash Power), which Jennings was proud to have taken part in. “Slowly but surely, we forced the government to pay attention to AIDS,” he said, “and treatments were developed so that we treat this as a chronic disease, whereas earlier it had been a disease that took most of my friends.”

Finally, Jennings addressed Concord Academy’s place in LGBTQ+ history, and his own role in founding the GSA here. While a CA history teacher in 1988, Jennings courageously came out to the entire school in a faculty chapel talk after recognizing that he was complicit in homophobia by concealing his identity. Soon after, student Meredith Sterling ’92, who at the time wasn’t open about the fact that her mother was a lesbian, asked for his help in starting a club to fight homophobia. The GSA became a model for similar groups in other high schools, and in colleges, middle schools, and elementary schools around the world. It is active at CA to this day, as are two LGBTQ+ affinity groups, for queer people of color (QPOC) and for queer and questioning students (Q2). “Over 50 percent of high schools in America have gay-straight alliances now,” Jennings said, “and that started here at Concord.”

Jennings closed with a brief overview of LGBTQ+ rights today. While there have been major advances, including the Supreme Court decision establishing marriage equality, “there is still work to do,” he said. Although discrimination against gays is prohibited in many U.S. states, there remain 30 states in which people can be fired from their jobs for being lesbian, gay, bisexual, or transgender, with no legal protections. Out of the many countries that still criminalize homosexuality, in eight of them, gay people can legally be put to death.

“Over 50 percent of high schools in America have gay-straight alliances now, and that started here at Concord.” 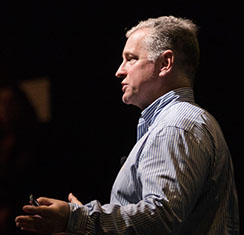 Jennings encouraged students to think back to the courage of individuals throughout history who spoke up and marched in defense of LGBTQ+ rights “in times a lot scarier than this,” he said. “Think of the courage of Meredith Sterling, aged 15 at Concord Academy in 1988, who decided to stand up to her entire school and say, ‘This needs to change.’”

He showed a letter to One magazine, published in the 1950s, in support of reducing intolerance. “I realize that the road ahead of us is long and difficult,” it read in part, “but that part of the road already traveled has been pretty tough too.” Jennings saw that the letter had been sent from a reader in Winston-Salem, N.C. — where Jennings grew up. “I had no idea when I was your age that I had somebody, 10 years before I was born, fighting for me in my hometown,” he said. “Maybe if I had known that, I wouldn’t have attempted suicide when I was 16. Maybe if my uncle had known that, he wouldn’t have drunk himself to death. This is why history matters.”

“If we in the present erase LGBTQ people from the past,” Jennings continued, “we will not be able to envision future equality. If we know our history, we’ll know that we can make it. Go out and make a society that in 30 years you will be proud to come back and tell your classmates at Concord Academy about.”

Jennings received a standing ovation, and many lined up to greet him afterward. Following the assembly, he joined students, faculty, and staff for a reception celebrating the GSA’s 30th anniversary, complete with a table full of rainbow cupcakes. He later spoke with students in the GSA over dinner, and in the evening with alumnae/i and current families, including many of his former students. In a TED-style talk, he urged all of us to be allies to one another and to consider where we can offer, to borrow a phrase from Harvard sociologist Charles Willie, a “compassionate pull” to meet the “courageous push” that others are making in the struggle for justice and equality. For a prior version of this talk, watch “As the World Turns: An Activist Looks Back from 50: Kevin Jennings at TEDxASL.”

After founding Concord Academy’s trailblazing GSA while a history teacher at CA, Kevin Jennings played a major role in the founding of GLSEN (The Gay, Lesbian, and Straight Education Network), an organization dedicated to making schools safe for all students and eliminating bully based on gender and sexual identity. He continued his work in humanitarian education and institutional change by writing books for queer youth, their parents, and allies, and working for various nonprofits, including as executive director for the Arcus Foundation, an organization for social justice, LGBTQ+ rights, and environmental conservation. His other political work includes his role as Assistant Deputy Secretary of Education from 2009 to 2011 under former U.S. President Barack Obama. Currently, Jennings is focused on immigration rights as the president of the Tenement Museum, whose goal is to preserve the history of the immigrants who built their lives on Manhattan’s Lower East Side.

Read our related article on the origins of the GSA at Concord Academy and the school’s foundational role in LGBTQ history. 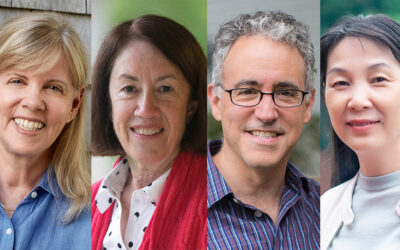 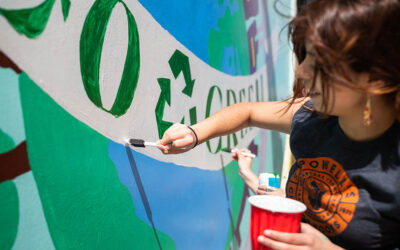 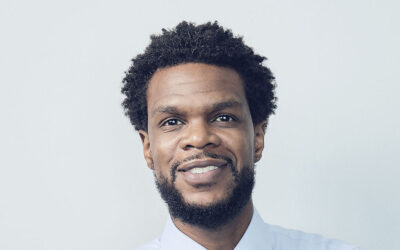