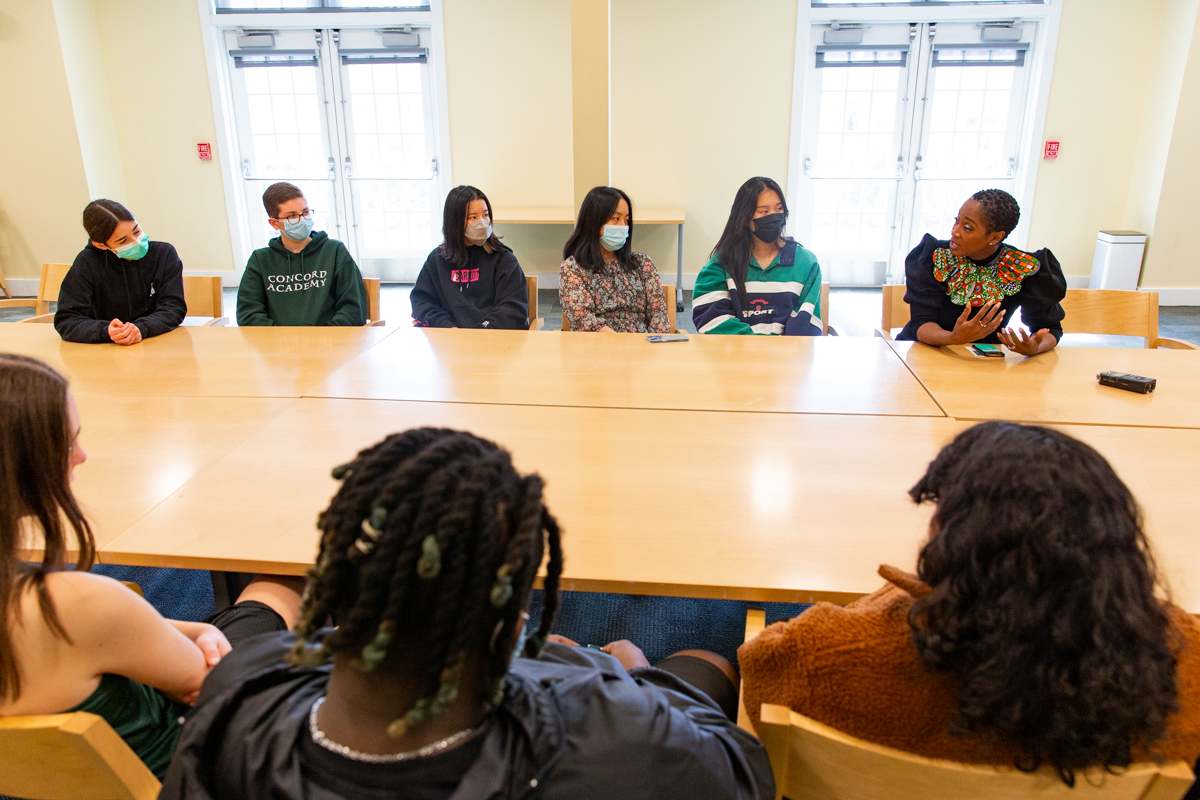 As a physician, Ingrid Walker-Descartes ’91, is used to giving formal talks. When she visited Concord Academy on April 8, she told around a dozen students she met with for a roundtable discussion that she relished the chance to interact more casually. Coming after a full school day, during which she had attended everything from morning chapel to an English literature class, the afternoon session gave Walker-Descartes a chance to answer students’ questions, and it gave CA students an opportunity to learn in depth about her work in a relatively new field called forensic pediatrics.

At the only pediatric trauma center in Brooklyn, N.Y., Walker-Descartes puzzles out what has happened to traumatized children—an ability especially important when children are too young to verbalize their own experiences. What’s more, she cares for her patients from the examination room to the courtroom. During exams, she speaks with children and families and screens for domestic violence, and she also functions in court, advocating for children’s protection. She trains other pediatricians and conducts research into child abuse and prevention. Most importantly, she listens.

It’s work that takes a heavy emotional toll. Walker-Descartes acknowledged that the pediatric residency program she directs at Maimonides Medical Center, is one of only 19 in the United States where physicians can train in this specialty. She spoke about her collaboration with colleagues across institutions, within such a small discipline. “To me, it never really matters where people go as long as they enter the field,” she said.

Asked how she chose forensic pediatrics, Walker-Descartes traced her decision back to years of community volunteering. “That was a huge part of college for me, being interested in supporting other women of color in STEM fields,” she said. In medical school, she volunteered with Reach Out and Read at a foster care clinic. When in her second year she was invited to sit in on examinations, she realized that many of the children she’d interacted with in the waiting room had landed in foster care after witnessing murders or suffering violent attacks. She was profoundly moved. “They were just so playful, so loving, so wonderful,” she said, adding that she wondered, “What would make an individual want to take this away from a child? I gained such a respect for children and their resilience.”

Walker-Descartes knew then that if there was a way to protect children’s innocence, that was where she wanted to focus her medical practice. At that time, no formal program or pathway to becoming a forensic pediatrician existed—so she set about designing her own experience. Later, as the field emerged, she sat for an exam so that she could testify on children’s behalf in court. “I backed into it, because I had wanted to be a foster care pediatrician,” she said. “But then I realized that it wasn’t enough to meet the kids at the end of it when they’re already abused. Why not get in earlier to help prevent it, or make sure the people that do it are held accountable?” Walker-Descartes also went on to earn a master’s in public health, because “a big part of impacting practice is writing public policy,” she told CA students. “A large portion of legislation completely ignores children. So there’s a need for that voice, especially from pediatricians.”

Her role includes advocating for families as well. She has contributed, for instance, to many policies around fatality reviews, which involve working with the local administration for children’s services from what she calls a “strengths-based perspective”—looking into the systemic issues and lack of resources that may have contributed to a child’s death, rather than automatically penalizing parents. “There are times when their children die because of things that the families have done,” she said, “ but we also need to be very critical of how the system contributes and to have policies to address and mitigate bias.”

Nowadays, pediatricians like her are “not just writing prescriptions for medicine, we’re also writing prescriptions to connect families to community-based organizations and we’re screening for social determinants of health, like housing and transportation, to get families access,” Walker-Descartes said. “That’s what’s needed from a preventative standpoint as well.”

For a student who expressed interest in pursuing a pediatric specialty in addressing and preventing child abuse and neglect, she advised, “Get exposure to it early and see if it’s for you, because it definitely stretches you—you should be really passionate about it.”

For others, she offered a perspective that took some pressure off the college admissions process, recalling how she started down her own educational and career path, beginning with attending the college, Haverford, that her CA advisor John Bracker had attended. “I met a person whose outlook on life I really loved, and how giving he was, and I was so appreciative of all I had learned from him,” she said. And she added that she’d known since she was a young babysitter that some sort of work relating to children was in her future. She wasn’t so strategic, she insisted: “I just knew I loved kids.”

In 2021, Ingrid Walker-Descartes ’91, M.D., MPH, MBA, received the 2021 Joan Shaw Herman Distinguished Service Award, together with physician Leslie Davidson ’66. Walker-Descartes has dedicated her career to serving children as a pediatrician with a specialty in child abuse and neglect. A training faculty for residents at Maimonides Hospital in New York, she graduated from the University of Rochester School of Medicine and Dentistry in 2001. Walker-Descartes is active in research and has authored several publications and educational materials. Her academic appointments include a Health Resources and Services Administration clinical research fellowship in general academic pediatrics at Mount Sinai School of Medicine, where she is also an instructor. She co-chairs the Child Protection Committee and the American Academy of Pediatrics Chapter 2 Committee on the Prevention of Family Violence. A member of the American Academy of Pediatrics, the Ambulatory Pediatric Association, and the AAP Special Interest Group on Child Abuse and Neglect, she is also an APA New Century Scholar Junior Mentor and a faculty scholar at the Mount Sinai School of Medicine Office of Ethnic and Multicultural Affairs. Walker-Descartes has received numerous honors, such as the Woodward Scholarship of the Office of Ethnic and Multicultural Affairs, the Medical Society of the State of New York Community Service Award, the Fannie & Henry Rice Scholarship, and the Rochester Prize Scholarship. She also volunteers for the Organization for International Development, which provides medical outreach to underserved communities in Jamaica without access to healthcare.