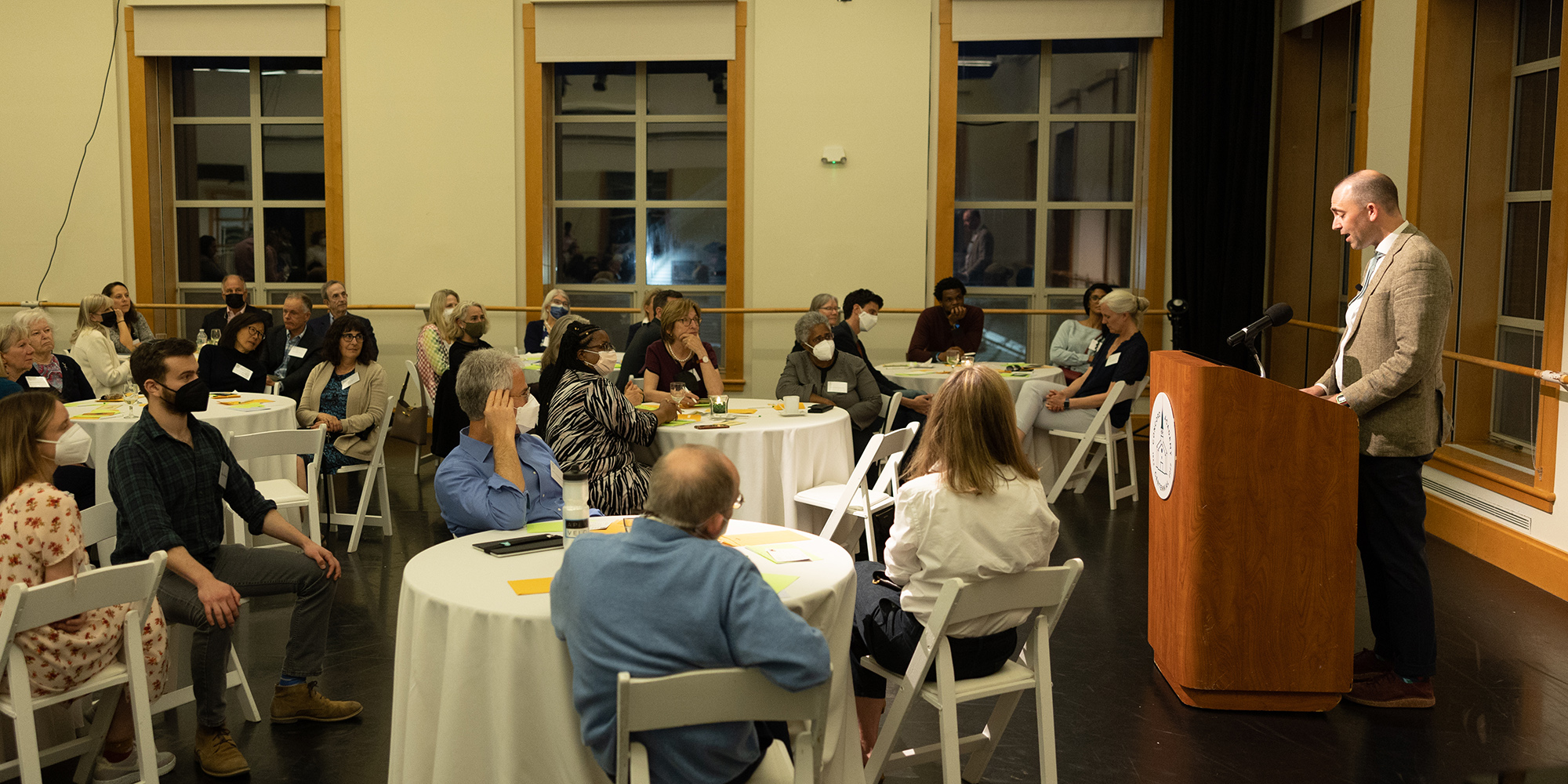 “I think the thing I love most about CA is that people here are more comfortable loving things in public than in any other school community I have been part of,” said English teacher Nick Hiebert on May 5, as he discussed how he had benefited from holding the Katherine Carton Hammer ’68 Endowed Faculty Chair over the past three years. That honor, he said, had given him time and space and support “to realize how much I am made, sustained, and inspired by other people.”

On this occasion, a group of CA community members—faculty and staff, current and former trustees, volunteer leaders, and classmates of Hammer’s—assembled in Concord Academy’s dance studio to celebrate the transformational role teachers have in students’ lives and to honor two individuals: Hiebert and Katie Hammer ’68, for whom this endowed faculty chair was named.

Hammer served as president of the Board of Trustees from 1995 to 1998. After she passed away while in service to CA, more than 70 of her family, friends, and colleagues made a collective gift to establish an ongoing opportunity for mid-career teachers at CA to pursue their passions and embark on educational journeys—to enhance their own knowledge in order to elevate the learning experience for CA’s students.

In her opening remarks, Interim Interim Head of School Sarah Yeh P’24 reflected on this fitting way to honor Hammer, who believed so deeply in teachers and their craft. And she noted Hiebert’s “incredible connection and rapport with students, and his deep support of colleagues,” as well as the respect with which the CA community holds him, “thanks to his heart, his humor, his humanity, his thoughtfulness, and his unparalleled letter-writing skills.”

Hiebert brought all of those qualities to bear in a moving presentation on the work he had been doing since 2018 to, as he said, “honor the Hammer Chair’s great and generous charge to continually develop as a teacher.” Taking that phrase as a “helpful call and gentle reminder” over the past few years, he said, “I feel like I have learned so much about myself, about how to learn better, about how to teach better.”

As Hiebert shared, he spent months reflecting on what was most important to his growth as a teacher and refined his focus into three areas: He wanted to think more about how he was teaching the essay and also how he could “center belonging” in his classroom to make it more equitable and inclusive. He wanted to learn more, as well, about his white racial identity, he said, “and how that was showing up in the classroom, especially in the context of working and living in a predominantly white institution in a predominantly white town.”

“One of the great revelations of this work has been figuring out how these three projects connect,” Hiebert continued. He described realizing that all three of these learning pursuits were ways of, in the words of scholar and education researcher Lisa Delpit, “making the implicit explicit”—and of becoming more aware of the processes that allow him to do so. Making the implicit explicit, then, was the very move he made in sharing his projects of reflection, connection, and collaboration.

Hiebert reflected on what it means to be part of a “collective” and to belong in a community. “It was a great mercy to realize that I learned best in partnership with other people, and especially so in partnerships that are authentic, that ask me to be accountable for my learning, and for the way I act upon that learning, and that help me resist my tendencies toward individualism,” he said. In reflecting in community, he realized that thinking of himself as a separate individual, even unconsciously, he said, “I am falling prey to aspects of a white supremacy culture that keep me from community and keep me from myself and keep me from the work of justice.”

So he set out to learn from people who would help him think, and feel, more deeply about what it means to belong, and also how his white racial identity intersects with and informs his other identities.

Prior to the start of the pandemic, Hiebert took a number of trips, to Chicago, New Orleans, St. Louis, and the Hudson River Valley. He also traveled to Alabama, where he visited the National Memorial for Peace and Justice and the Southern Poverty Law Center, and where he confronted the legacy of whiteness in Confederate monuments with friends from the CA community, who, he said, “make the project of imagining and working for other worlds possible.” Once COVID-19 hit, he continued his encounters over Zoom. 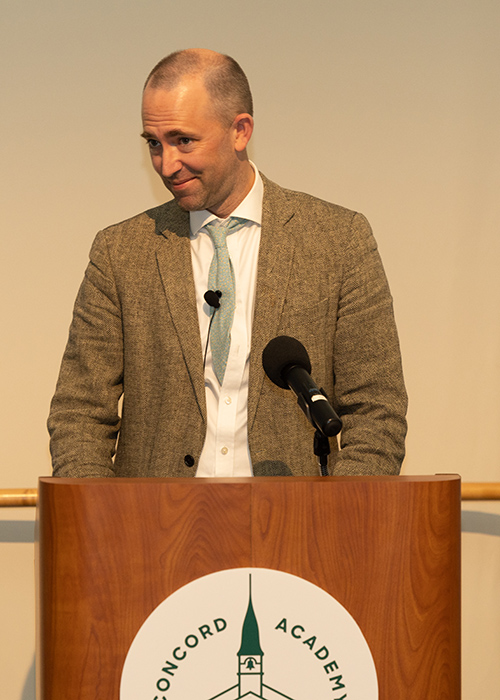 “It was a great mercy to realize that I learn best in partnership with other people, and especially so in partnerships that are authentic, that ask me to be accountable for my learning, and for the way I act upon that learning, and that help me resist my tendencies toward individualism.” Nick Hiebert

Hiebert described how his explorations shaped him, and he also invited all in attendance to participate in individual reflection and small-group discussion about something that brought them joy, something they wondered about, and something they’d like to learn more about. The exercise set into action an experience of community. It also gave attendees a glimpse into how Hiebert invites his students to bring their whole selves into his classroom.

Known for having a daily epistolary practice—he regularly writes and sends letters to colleagues and friends near and far—Hiebert encouraged others to express appreciation for their own communities in writing. Providing postcards and stamps, he asked each attendee to write to someone “who makes you come alive, a person who helps you to be joyful, to wonder, and to learn.” As the evening ended, he took evident joy in anticipating delivering the cards to the post office box on Main Street on his way to Chapel the next morning. 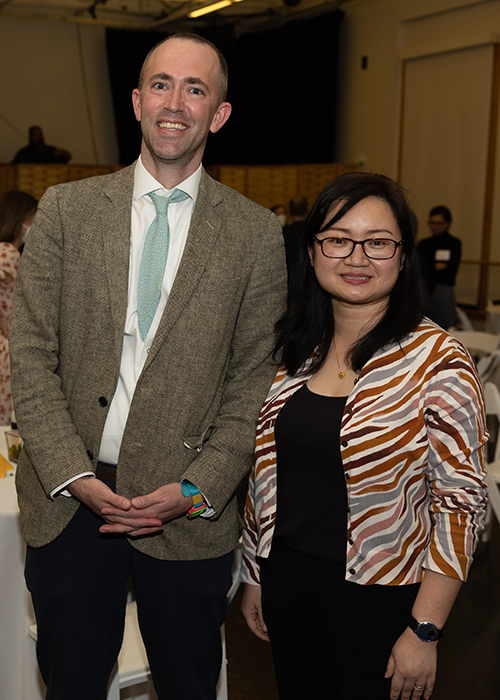 The Katherine Carton Hammer ’68 Endowed Faculty Chair was established in 1998 in memory of Katie Hammer ’68, president of the Concord Academy Board of Trustees from 1995 to 1998. A vocal advocate for CA’s faculty, Hammer considered talented, inspiring teachers to be essential to the school’s character and continued strength. Following her untimely death in 1998, her family and friends decided that the most meaningful way to honor her commitment to CA would be to endow a permanent fund to reward and support gifted teaching. In consultation with the dean of faculty and academic dean, the head of school awards the Hammer Chair to a mid-career faculty member who has demonstrated outstanding talent in the classroom and inspired educational vision. The chair rotates among departments every three years. The fund supports salary and benefits, as well as a special stipend enabling the designee to pursue projects of interest during the summer months. Wenjun Kuai, who teaches Mandarin in the Modern and Classical Languages Department at Concord Academy, is the holder of the 2021–2024 Katherine Carton Hammer ’68 Endowed Faculty Chair.

Nick Hiebert, the sixth holder of the Hammer Chair, has been teaching for 19 years, the past nine of them at Concord Academy. In addition, he works as a faculty associate with Bard College’s Institute for Writing and Thinking, and, during the summer, on the faculty of the Multicultural Teaching Institute. An avid fan of the United States Postal Service, Hiebert also enjoys walking (and sometimes running), reading poems in the morning, and scribbling things in his notebook. He lives on campus at CA with his partner and their two cats.