For MLK Day 2016, A Stirring Speech by Princeton Prof. Imani Perry ’90, and Workshops Reflecting on Self and Community 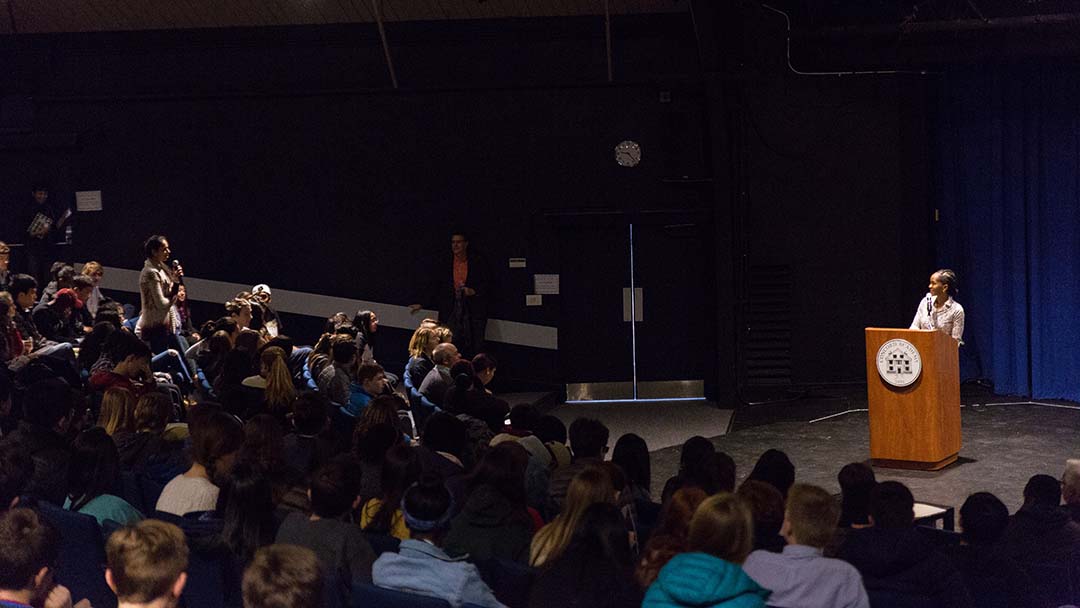 On January 19, the Concord Academy community devoted a day to honoring the memory and legacy of Rev. Dr. Martin Luther King, Jr. A moving keynote speech by Imani Perry ’90, Hughes-Roger Professor of African American Studies at Princeton, set the tone for an open-hearted and open-minded day of workshops led by CA students, faculty, and staff.

Against the backdrop of recent incidents of violence and injustice in the U.S., Head of School Rick Hardy suggested in his opening remarks, individuals can perhaps best observe MLK Day by attempting to see through others’ eyes. “The way forward begins with a desire to know others, to listen and to be aware, to seek understanding and even to risk misunderstanding, to confront difficult subjects and to engage in challenging conversations, all in an effort to see a point of view different from our own,” he said.

In her speech, Prof. Perry responded to #ReclaimMLK, the hashtag used this Martin Luther King Jr. Day by activists across the U.S. to protest racial injustice. Offering a nuanced and historically informed perspective on what it might mean to reclaim Dr. King’s story, she invited the CA community to complicate the common vision, “too modest and simplistic,” of King.

We often hear only one speech of many — “I Have a Dream” — and forget the disapproval King faced in his lifetime, she said. We forget the vicious backlash he received when speaking out against police brutality and wealth inequality, international– and economic policy, and northern racism as well as Jim Crow. “We forget that he was courageous, and not just saintly,” she said.

Likewise, Perry said, we forget that “he wasn’t always right, nor was he always righteous.” Shaped by prejudices of his time, King marginalized younger organizers and female leaders of the freedom movement, such as Ella Baker and Fannie Lou Hamer, and, responsive to the homophobia of the larger society, distanced himself from Bayard Rustin, the architect of the March on Washington. In short, he was fallible. And in telling a “too-perfect, and too-pristine story, we forget that greatness is in fact not achievable without fallibility,” Perry said.

By telling King’s story in all its complexity, she suggested, we offer one another a pathway for confronting our own limitations and setting aside our defensiveness. We come to see sincerity — not perfection — as the goal of a righteous life. “Every time you step out and raise your voice to say anything of importance, you run the risk of error, of misjudging, of failure,” Perry said. But we can’t run from the risk of making mistakes, because the transformation we seek in ourselves and others can be achieved only in community.

This information age with its peculiar public anonymity makes it difficult to nurture social justice work online. So Perry focused on what individuals can do in flesh-and-blood community. She had a special charge for CA students. As young people, she said, “you’re called to much more than good grades and good behavior.” Students’ best selves will be revealed in relationships, she said, in their “capacity to care, imagine, create, and respect.”

“Here at Concord Academy, you’re capable of pursuing that best self by committing to the full membership, recognition, and expression of everyone in the community,” Perry said. She admitted that it’s a lot harder than it sounds. Because of individuals’ varied circumstances, the community isn’t equal, and our unequal American society produces tacit acceptance of inequality. Her challenge: to listen deeply, to share knowledge, to include. To invite deep human connection.

“Young people are so important to the pursuit of a better society,” she said. “You’re possessed of a larger imagination than those of us who are your elders. You’re filled with a possibility that can move us out of the ways of the world that have distorted us, your elders, and you can push us into something kinder and more just.”

What Perry described as the “dynamic and vulnerable process of community-building” was nurtured, for her personally, here at CA. Prior to studying literature and American studies at Yale, getting her Ph.D. in history at Harvard, and her J.D. from Harvard Law School, teaching law, and writing about racial inequality and its legal foundations, Perry was involved in social justice work at CA, where she served as the president of an affinity group for students of color, joined Concord Students Against Apartheid, and lobbied to diversity the English curriculum. She also spoke, from the heart, of times she had fallen short in seeing the world through others’ eyes.

Judging by the swell of responses and questions, which Perry graciously stayed to answer after her talk and over lunch, her own story had provided students a pathway too. 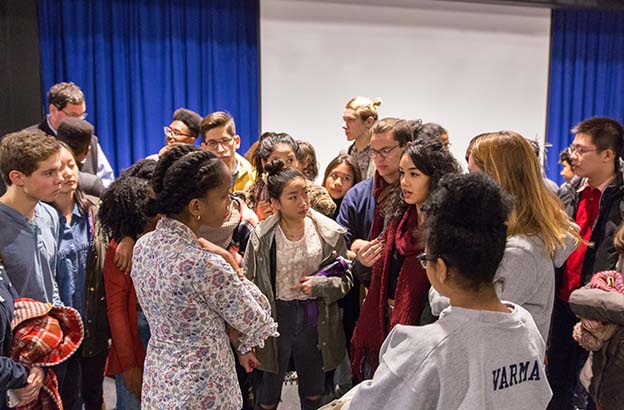 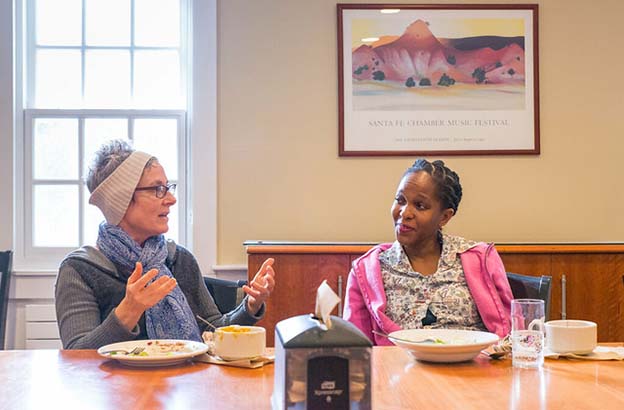 Following Prof. Perry’s speech, students moved between their choice of more than 30 workshops designed and run by their classmates and teachers. From discussions of everything from body image to climate injustice, animal rights to the AIDS crisis, diversity in the media to Islamophobia, students leaned into their discomfort, listened intently, and spoke candidly and respectfully about difficult issues. Bystander training was also offered by Duane de Four, who has worked with universities, professional sports leagues, and the armed services.

CA seniors and Coheads of Diversity Nadia Itani ’16 and Quess Green, reported the results of a school-wide survey of students’ top commitments for engaging with one another and priorities for an ideal school culture. They urged their fellow students to continue to listen actively and respond honestly and kindly, to keep the spirit of social activism alive at CA every day.