When they see hunger in their communities, CA alumnae/i find their own ways to address it 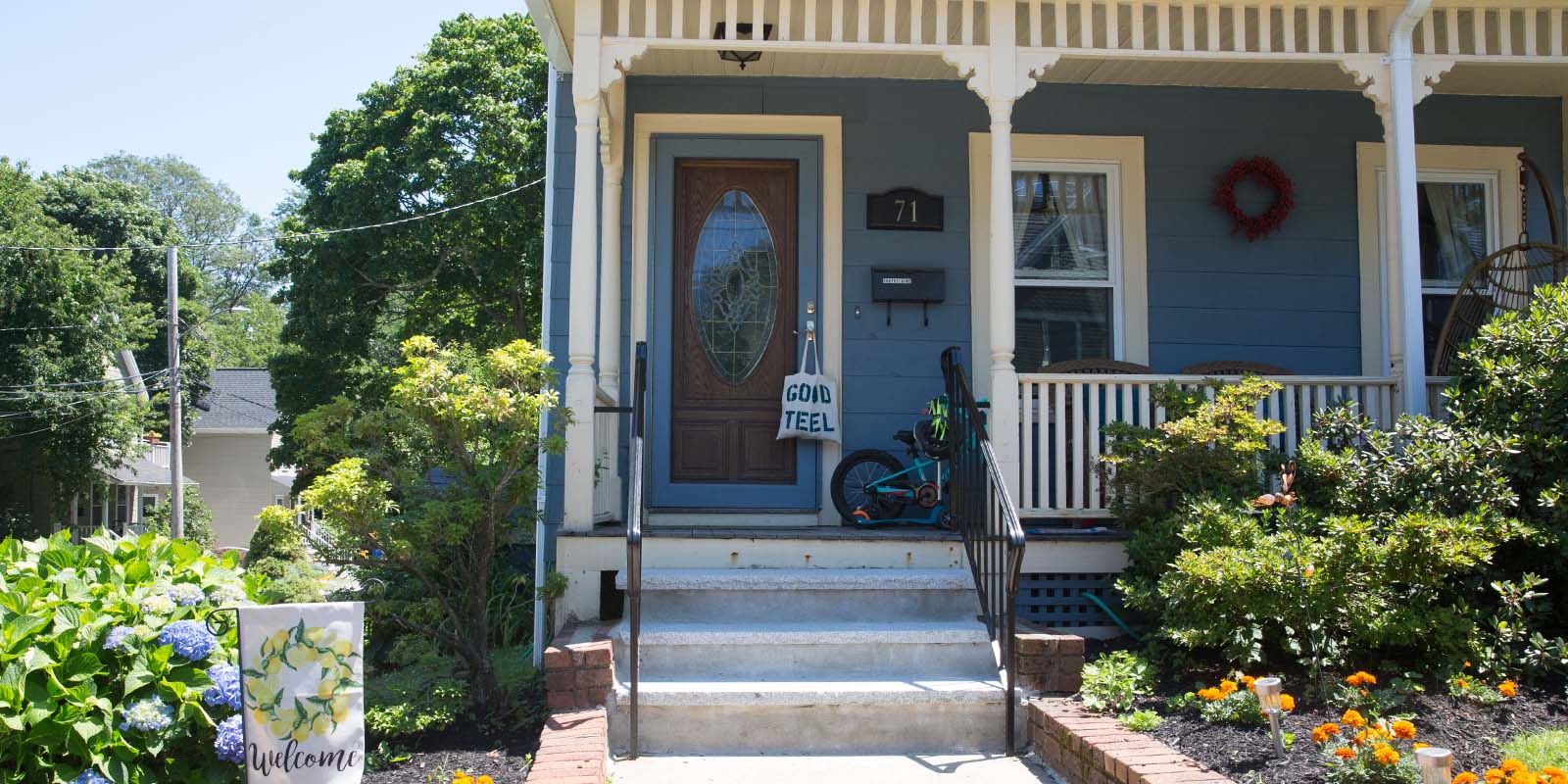 A Good Teel bag awaits pickup at a home in Arlington, Mass.

On a steamy July morning, Kezia Parsons Simister ’95 drives slowly through her East Arlington, Mass., neighborhood, scanning the stoops of the two- and three-family homes for contributions. In front of one bright blue building, she pulls over. There’s a canvas bag on the doorstep, resting against a child’s bicycle. The bag is bursting with nonperishable food and labeled “Good Teel,” the name of a community food drive Simister began organizing in 2016.

“The idea was to make it easy for people to give,” Simister explains as she empties cans and bags of rice from the neighbor’s bag into the trunk of her red station wagon. Once a month, she sends an email asking neighbors to put spare nonperishable goods into bags on their porches, then she collects and delivers all the goods to the local food pantry.

In establishing Good Teel, named for her neighborhood street, Simister joined other CA alumnae/i taking creative approaches to address a persistent — and tragic — paradox: The United States is a nation of great food abundance, yet millions of people go hungry. Some 40 million Americansfaced food insecurity in 2017, according to the U.S. Department of Agriculture, and it also estimates that the nation wastes between 30 and 40 percent of its food supply annually.

While many factors contribute to the waste on a macro level — such as food that spoils between origin and destination and produce that is discarded for aesthetic reasons — on a micro level, the challenge is often connecting those who have with those who do not. That’s where Good Teel and other initiatives led by CA alumnae/i enter the picture.

Simister had done hunger-related volunteering in the past; she knew that both the need and the capacity were great in Arlington, whose proximity to the high-tech sector of Cambridge has led to an increased cost of living. But she wasn’t really sure how she could help. She sometimes would start a food collection, intending to take the items to the Arlington Food Pantry, but often she thought her individual contribution was too small. “I felt silly going there with just a couple of cans,” she says.

When a friend mentioned a local teenager who had done a neighborhood food drive, Simister got interested in the idea of giving as part of a group. “We all may have a little to give, but together, it turns into a lot,” she says. A food collection route appealed to her for other reasons, too. As part of a dual-career couple with young children, she was having trouble fitting traditional volunteer gigs into her schedule, but she wanted service to be part of her family’s life. “I looked around this neighborhood and it’s full of families, and I thought, I can’t be the only one who wants to give but doesn’t have time,” she says. 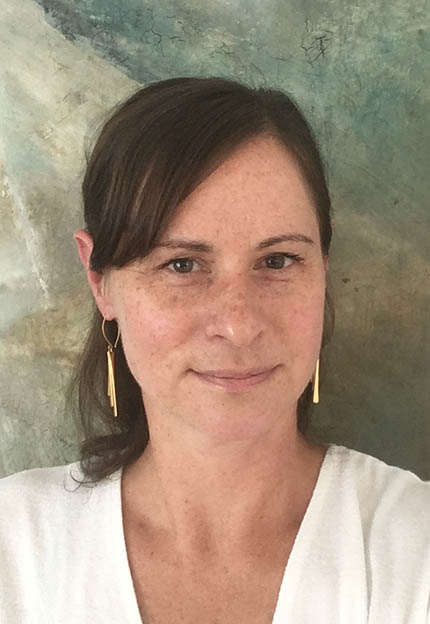 “We all may have a little to give, but together, it turns into a lot.”

So she hung a few flyers in the local park advertising Good Teel and had some bags printed up. Soon, four families had agreed to store Good Teel bags in their pantries, drop extra items in them whenever they could, and leave the bags on their porches once a month for her to collect. Four families quickly ballooned to 30, and Simister had to stop advertising.
“I couldn’t fit more in my car!” she says with a laugh, pointing to the overflowing trunk of her station wagon.

She says neighbors often email her to say they appreciate having a volunteer opportunity brought to them that allows them to feel like part of a positive force in the community.

While Good Teel has stayed small, Simister’s idea proved contagious. Word traveled quickly up Massachusetts Avenue; a nearby neighborhood launched its own food drive. Simister’s route delivers about 150 items a month to the Arlington Food Pantry, which serves about 1,200 town residents each year. Part of Good Teel’s success, Simister says, lies in its simplicity. It’s focused on the needs and capacities of one “microneighborhood,” about six square blocks. Each month, she emails out a list of what the food pantry needs most — “usually toiletries, toilet paper, and diapers especially” — and her neighbors respond with whatever they can.

“It’s not a nonprofit, it doesn’t have a website,” Simister says. “It’s just neighbors with an email list, giving what we can.” 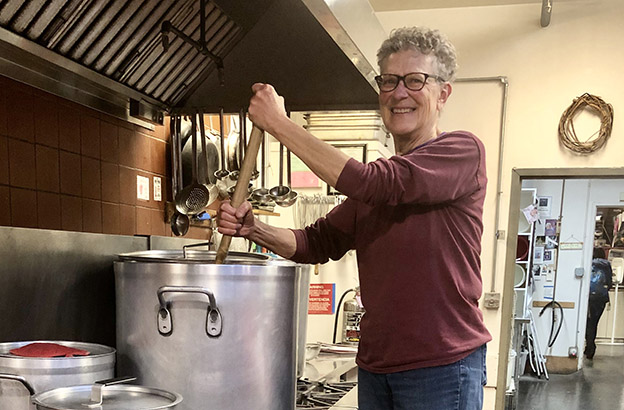 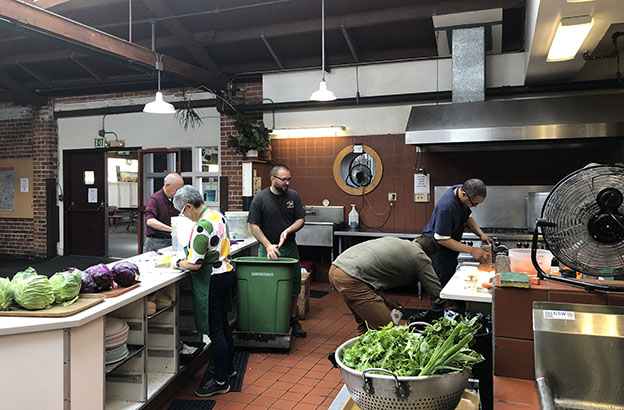 Of course, what communities can give, and what they need, changes over time. Mim Locke ’64 sees that change daily at the San Francisco soup kitchen — sometimes called a “free restaurant” — where she lives and works. Since 1986, Locke has been part of the Martin de Porres House of Hospitality (Martin’s for short), which serves breakfast and lunch to anyone in need in the city’s Mission District. Part of Martin’s philosophy is “that eating is a right, not a privilege, and that feeding the hungry is a matter of justice, not of charity.”

As part of a collective that manages Martin’s, Locke has done everything from serving meals and running the garden to keeping the books and managing any problems that arise with volunteers or guests. She and her partner live there and share all the responsibilities with 10 or 12 others at a time. She describes herself as “kind of a hippie” who came to Martin’s as part of a search for a meaningful, contemplative life. “Back in the ’60s, we all kind of took a pledge to be part of the solution, not the problem,” she says.

“Part of Martin’s philosophy is that eating is a right, not a privilege, and that feeding the hungry is a matter of justice, not of charity.”

Since then, the soaring cost of housing has transformed San Francisco, dramatically affecting who can live and work in the city — and who has the ability to devote a life to service. “It used to feel as if the city was a kind of sanctuary for alternative lifestyles, but no more,” Locke says. “It’s just so hard for people to live here now, which has really changed our volunteer base. Originally, people could volunteer and have a day job and pay rent and it worked. No more.”

So Martin’s has had to get creative to attract new volunteers. In addition to its “free restaurant,” Martin’s provides space to and sponsors the Burrito Project SF, a three-year-old organization that offers busy professionals time-defined, tangible ways to be of service. Once a month, volunteers gather at Martin’s to make burritos, which they then deliver by bicycle to the homeless or others in need. Volunteers sign up for shifts on Facebook; prep, assembly, delivery, and cleanup all have separate sign-ups so people with as few as 45 free minutes can still participate.

Locke sees this style of volunteering as a positive sign for the future of Martin’s. “The Burrito Project has brought in more young people, and that’s exciting to us,” she says. “There are a lot of young people who really care and are coming up with creative solutions.” 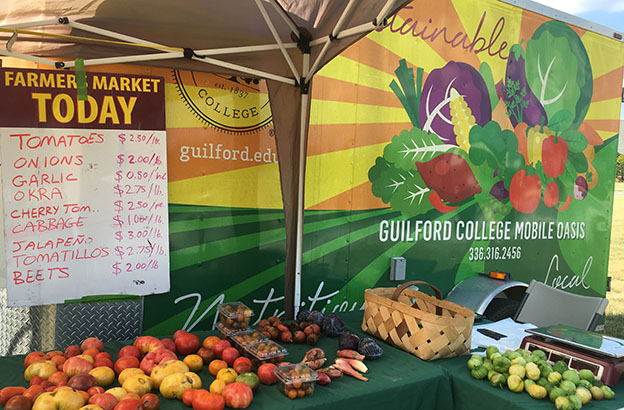 Produce on display at the Guilford College Mobile Oasis. 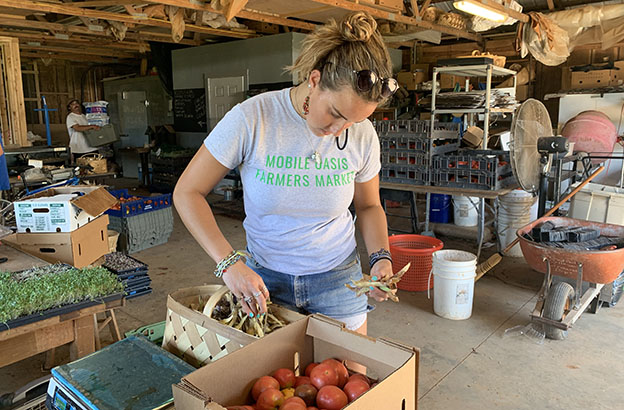 Mallory Cerkleski ’16 checks produce to be sold at the mobile market, which she manages.

One such young person is Mallory Cerkleski ’16, a senior at Guilford College in Greensboro, N.C. Drawn to veganism and issues of food systems beginning in her years at CA, Cerkleski got involved with the college’s farm during her first year on campus. That interest introduced her to a local health department initiative called Mobile Oasis, which brings local produce into “food deserts” — communities with no convenient access to fresh fruits and vegetables.

This year, Cerkleski is the manager of the program, which is now overseen by the college. She and other student workers set up and run weekly pop-up produce markets in neighborhood sites such as community centers and office buildings. Mobile Oasis does not give away produce, but its prices are usually lower than the grocery store’s.

The downside to selling rather than giving, Cerkleski says, is that not everyone can afford their offerings. The upside is that those who can afford to shop there feel empowered and in charge of their food choices. “The market site is so humanizing to communities who have, in the past, been dehumanized,” she says. “It’s a service that’s the same as the grocery store. They have the choice to have what they want, not just a bag of what’s left over.”

“The market site gives people the choice to have what they want, not just a bag of what’s left over.”

As a result, she says, the customers at their most successful market, in a predominantly black neighborhood of Greensboro, have helped Mobile Oasis spread the word to others. “They’ve helped a lot with the advertising and canvassing,” she says. In 2018, Mobile Oasis sold 2,000 pounds of fruits and vegetables to communities in or near food deserts.

Cerkleski says involvement with the college farm and Mobile Oasis has been a big part of her college experience, one closely connected to her academic pursuits of sustainable food systems and political science. While much of her work is hands-on — setting up the market, selling food, and chatting with customers — she also writes grants to help secure the program’s future and expand the number of market sites.

She says she finds the work deeply satisfying, but that it raises a lot of hard questions. “Logistically, trying to find money and grants is hard, but when I step back from it, I wonder why I have to do it in the first place,” she explains. “Why do I have to search so hard to find money for people to have one of the most basic things in the world?”