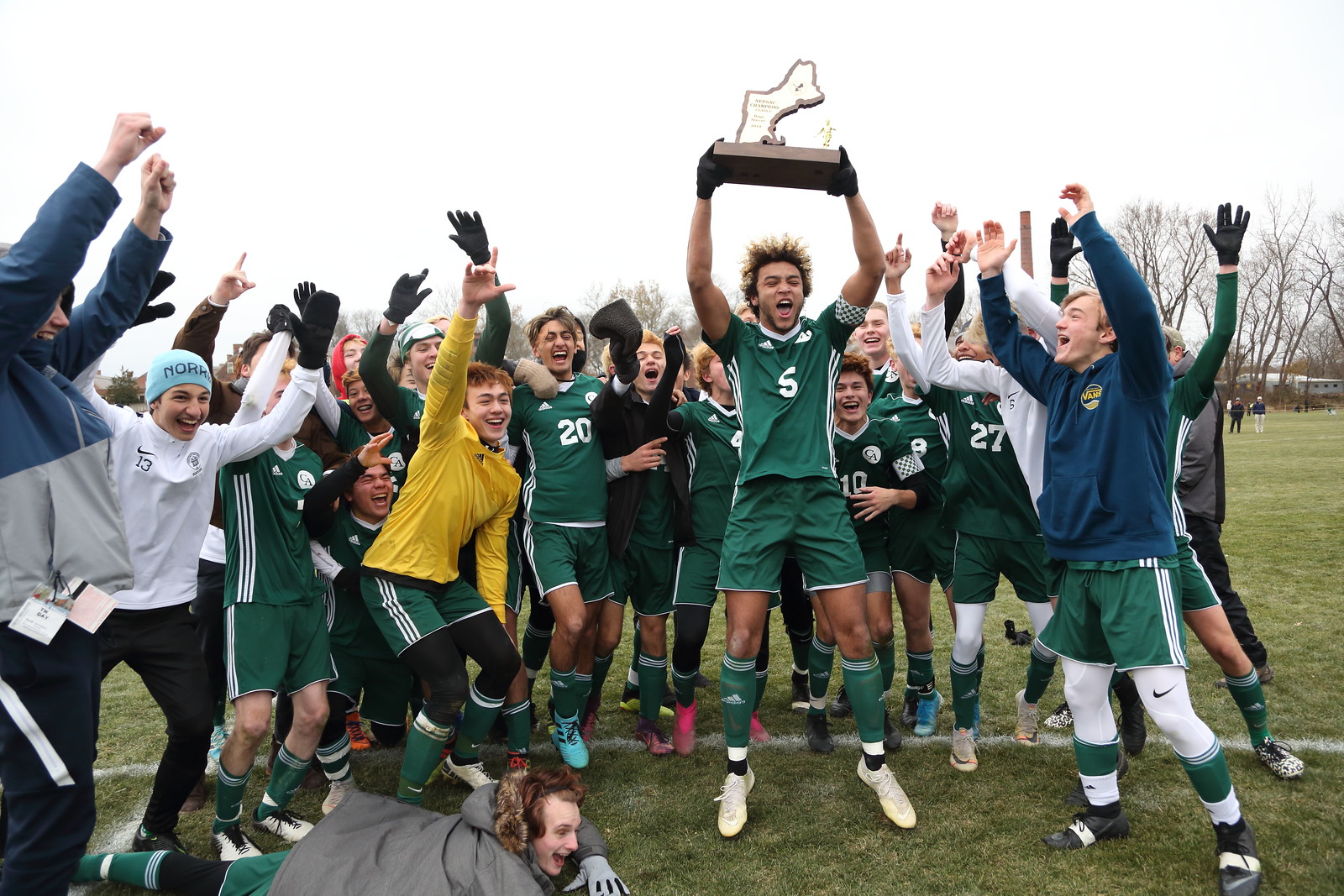 The boys varsity soccer team enjoyed an extraordinary season! With an unblemished record, the team clinched the Eastern Independent League (EIL) title a week before the end of the regular season. The following week, the squad suffered its first loss of the season but used it as a spark as they entered postseason play with the program’s fifth consecutive New England Preparatory School Athletic Council (NEPSAC) tournament bid. As a No. 2 seed, CA earned a hotly contested victory over No. 8 seed Greens Farms in the quarterfinals and cruised past No. 3 seed St. Andrews in the semifinals in front of their home crowd. Only one game stood between them and their goal of winning the program’s first outright NEPSAC championship. On yet another cold and blustery day, the team achieved their goal by beating the No. 5 seed Holderness in a thrilling 3-2 battle and hoisted the Class C 2019 NEPSAC soccer tournament trophy high. This marks CA’s sixth NEPSAC championship in school history, following, most recently, girls squash in 2017 and boys cross-country in 2018. EIL and NEPSAC championship banners will be raised in the gym to honor the achievements.

Boys and girls cross-country hosted the EIL Cross-Country Championships at Great Brook State Park for the second consecutive year. In the boys’ contest, CA finished a close second to Landmark in a race that was not decided until the final 100 meters. CA’s Reza Eshghi ’20 won the individual title, and five CA runners earned league All-Star by finishing in the top 15. In the girls’ race, half of CA’s runners set personal bests and several others had season-best performances as the girls finished sixth overall. The program concluded its season at the NEPSAC Division III Championships on Saturday in Litchfield, Conn. CA boys varsity cross-country finished third out of 20 teams, marking the third year in a row they’ve reached the NEPSAC podium. Sophomore Tyler McGarry ’22 led all CA finishers, placing fifth overall and earning All-New England honors. Boys JV cross-country also placed third, with Jack Keller ’20 and Teddy Macri ’21 finishing first and second. The CA girls varsity cross-country team also had a strong race, with all six runners setting personal bests.

The girls varsity volleyball team enjoyed yet another winning season. After a slow start, the team rallied by winning eight of the last nine contests, including the decisive match at Pingree in the Chandler Bowl. The squad fell just short of earning a NEPSAC tournament bid despite their feverish finish to the season.

The girls varsity soccer and varsity field hockey programs both continued to improve this year as they acclimated to new coaches, Brett Kelly and Nicole Baratz, respectively. The field hockey team enjoyed a strong finish with two wins and a tie in their last five games. The girls varsity soccer team, slowed by injuries, continued to improve individual skills and team systems throughout the season.

It was another great fall athletic season by all measures, but most importantly, the players enjoyed the opportunity to pursue excellence while learning important life skills and values to carry with them off the field and court.