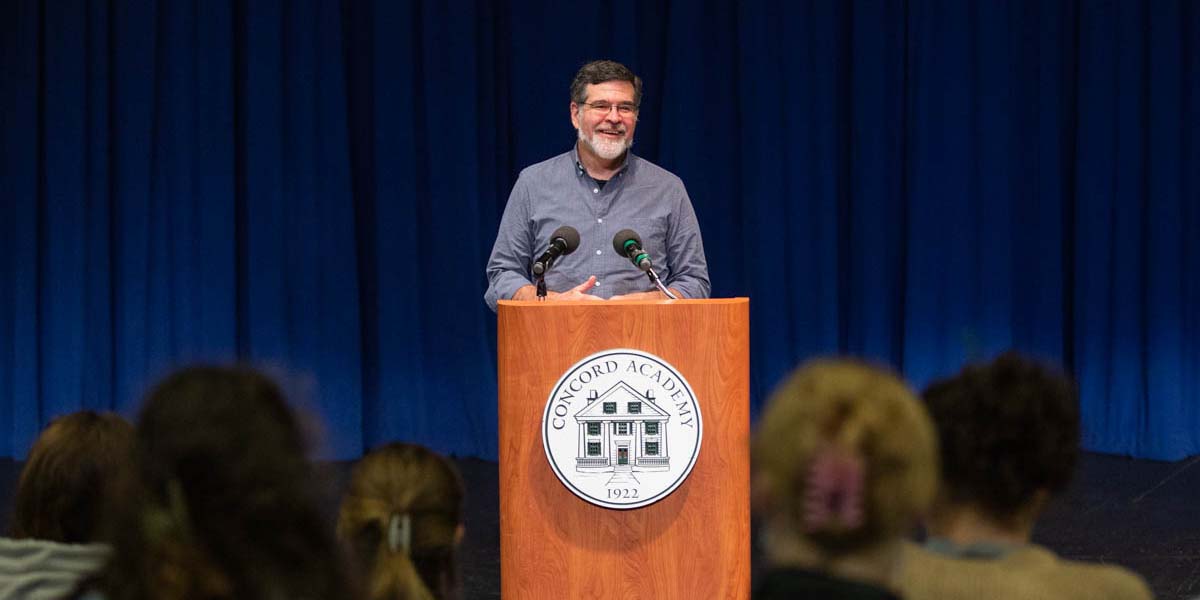 In 2010, independent journalist Wen Stephenson wrote his first long personal essay about climate change and activism. “Walking Home from Walden” gave him a form to wrestle with his awakening to the climate crisis with help from 19th century transcendentalist writer Henry David Thoreau. Writing it radically changed his life, leading him to walk away from his mainstream media career. “I couldn’t imagine getting up in the morning and working on anything other than climate justice,” he told an audience at Concord Academy on November 16. “Since then, everything I’ve written has been about that ongoing struggle to come to terms with the climate catastrophe that’s bearing down on us all—and the movement fighting for a livable and just future on this planet.”

Stephenson was the second speaker in this year’s Environmental Symposium, a one-semester evening course and lecture series that offers all CA students an opportunity to learn from professional environmental scientists and advocates. An independent journalist and climate activist, Stephenson is a contributing writer for the Nation. Formerly an editor at the Atlantic and the Boston Globe, he has also written about climate change, culture, and politics for Slate, the New York Times, Grist, and the Boston Phoenix.

In CA’s Performing Arts Center, Stephenson read his recent essay “Walden at Midnight,” which was published in the new anthology Now Comes Good Sailing: Writers Reflect on Henry David Thoreau. (Read the essay in the Nation, there entitled “Seeing the Climate Crisis Through the Eyes of Henry Thoreau.”) He also discussed Thoreau’s political radicalism and its connection to today’s climate and social justice struggles.

Stephenson drew particular parallels between Thoreau’s active—and risky—engagement with the abolitionist movement in Concord and the kind of civic action needed today to address the climate crisis. He cited a line from Thoreau’s radical abolitionist essay we know as “Civil Disobedience”: “Let your life be a counter-friction to stop the machine.”

“Climate change is an enormous racial injustice in its own right,” Stephenson told CA students. “The vast majority affected by climate change are in the Global South—not white, already burdened with the legacy of white supremacy and colonialism. They’ve done virtually nothing to cause the problem and are the first to suffer from it.”

On a more fundamental level, the lesson Stephenson drew from the abolitionist movement was the role of radical activism and political action in a social movement for societal change. “As a longtime journalist who has focused on American political history,” he said, “I’ll tell you that no major change has ever been accomplished in this country on any deep, fundamental issue without radicals pushing for it.”

Stephenson’s essay cites some dire climate-science forecasts, including catastrophic sea level rise and the extinction of an immense number of species, which has already begun to unfold. In a Q&A session, he was asked how he reconciles the seemingly conflicting notions that natural processes are so much greater than humans but that humans are affecting natural processes. “It is worth reminding ourselves that the earth will go on, that life on earth will continue regardless of what happens with human-caused climate change and mass extinction,” Stephenson said. “It’s easy to lose sight that what we’re really talking about is humanity.” That distinction is important, he said, because “it keeps something vast focused on the here and now.”

In this way, Stephenson said he can better continue to take in the reality of what we are facing, and continue to engage.