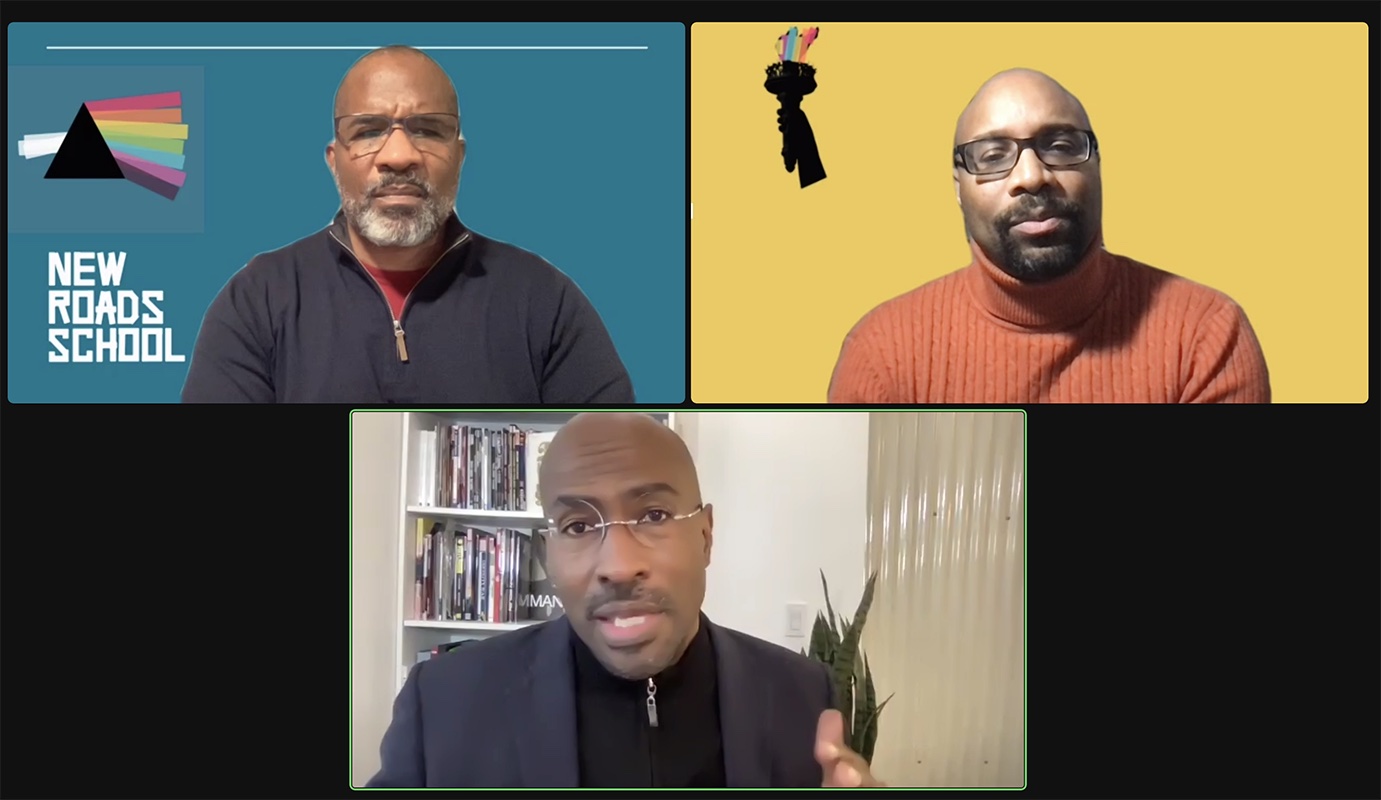 “It was like they were trying to kill hope in America the year I was born,” CNN host, political commentator, and author Van Jones said at the start of a discussion through the Critical Conversations speaker series on January 20. Jones, who was born in 1968, the same year both Martin Luther King Jr. and Bobby Kennedy were assassinated, added, “I’ve been trying to figure out some way to bring some of that hope back.”

On the anniversary of Inauguration Day, Van Jones virtually joined Mario Johonson, director of student life and equity and inclusion at New Roads School, and head of New Roads School Luthern Williams in conversation. In this second event in the Critical Conversations series, entitled “Educating to Rebuild the American Dream,” Jones spoke to members of public, private, and charter schools across the country.

The series, hosted by New Roads School in Santa Monica, Calif., aims to bring conversation and professional development around equity and justice to school communities. For a second year, Concord Academy has partnered with New Roads School as a national sponsor of the series. In addition to bringing these opportunities to Concord Academy, CA has also extended and secured partnership with METCO (The Metropolitan Council for Educational Opportunity) and the 31 public school districts in the Boston area it represents.

Throughout his talk, Jones emphasized the importance of empowering young people through education. “I don’t think you can overstate or underestimate the impact a teacher can have on a child,” Jones said. Education has always been an important pillar in Jones’ life. Both of his parents were school teachers, and his grandfather was the president of Lane College. “Education has been the way up and the way out for my family,” he said.

Despite the success Jones found through education, he described feeling alienated in school as a Black student. He shared that while attending University of Tennessee at Martin, he considered withdrawing, feeling he did not belong on that campus. As he weighed this decision, a professor reached out to him and encouraged Jones to stay enrolled. “He recognized my talent and my drive and my hunger,” Jones said. He graduated from University of Tennessee in 1990 with a B.S. in communication and political science and went on to earn a degree from Yale Law School in 1993.

Jones asked the educators to continue to similarly be champions for all of the students in their classrooms. “Cultivate more capacity for the belief in the best of people, especially young people,” he advised. Jones emphasized that this investment in youth and education is especially important as younger generations face major ecological, political, and societal challenges.

“You no longer live on the planet you were born on,” Jones told his audience. He pointed to the severe winter storms in Texas last winter and the heat waves in the Pacific Northwest this summer. “We need a generation of giants,” Jones said. He posed this question to the students listening: “Can you build a human civilization more at peace with itself, and more at peace with this earth, than your parents and your grandparents did?” By assigning this “bigger, more global mission,” Jones hopes educators can inspire young people to come together to face today’s challenges.

At the end of the discussion, Johonson asked Jones what is at stake if Americans don’t “reimagine education, democracy, the American dream, and humanity.” Jones replied, “Everything is at stake.” He warned of the fragility of democratic governments and emphasized that we need to come together if democracy is to survive in America.

To do so, he encouraged his audience to lean into love. “The people promoting hate are not shy. You are never going to out-hate these haters,” Jones said. “But you can out-love them. You can out-organize them. You can out inspire them. And that’s what we have to get back to.” 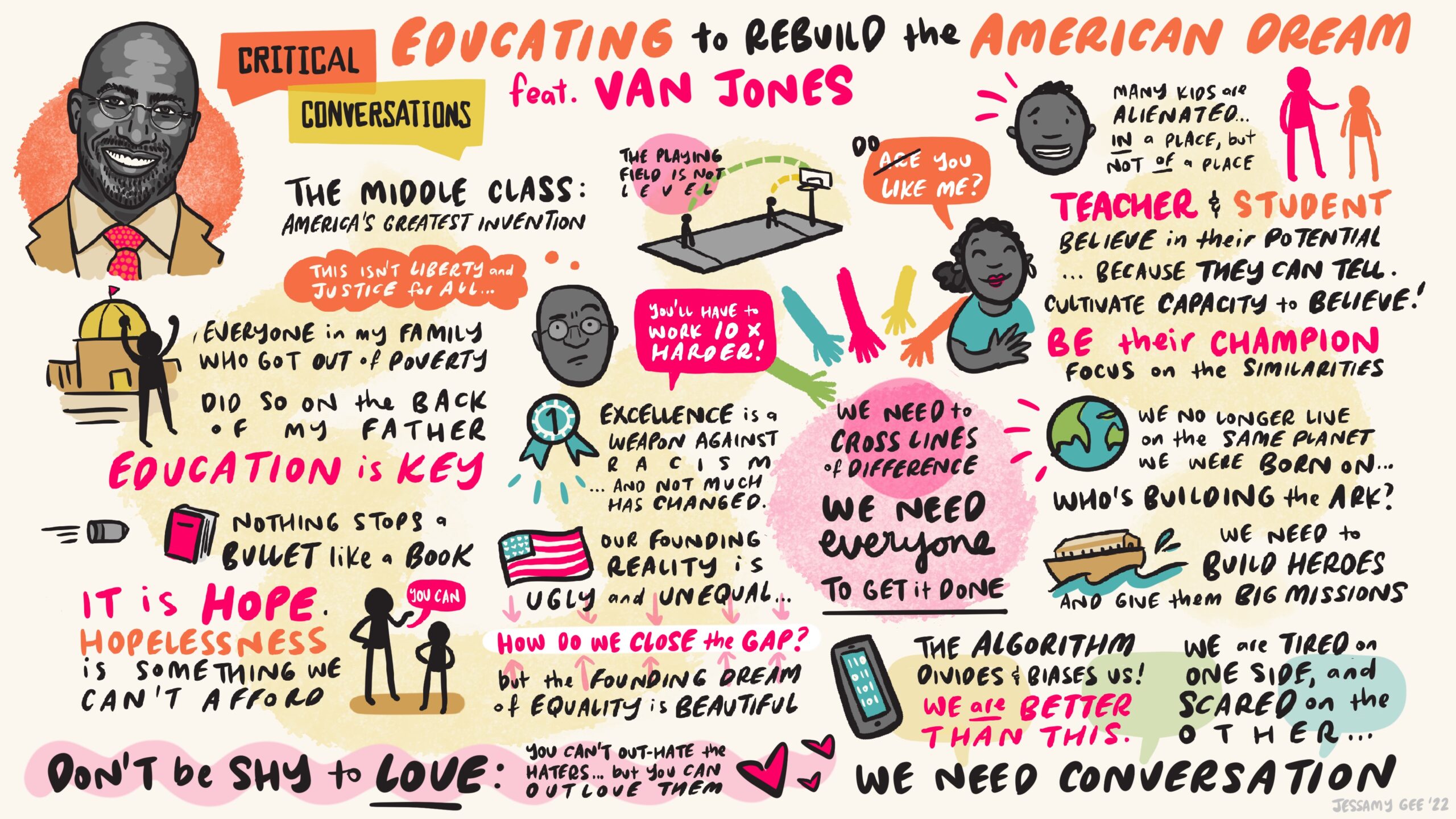 Artist Jessamy Gee created this cartoon live during the event.