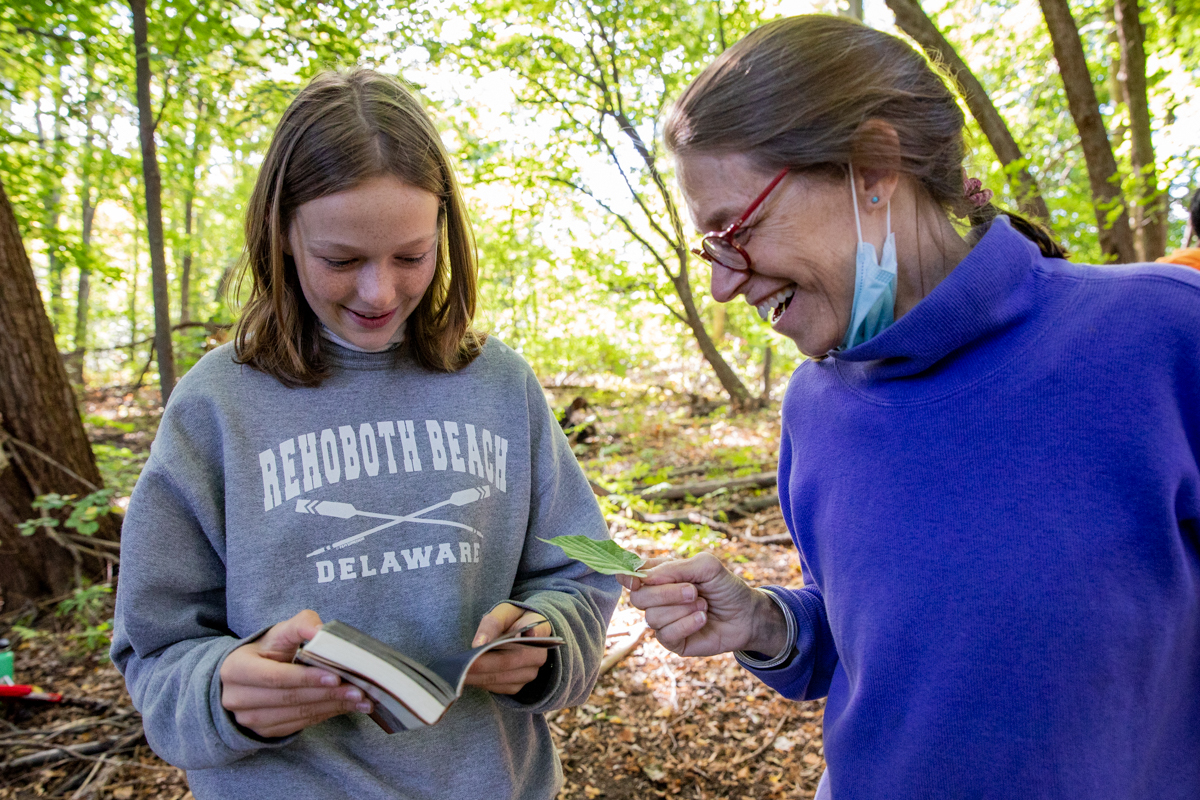 Environment justice and sustainability coordinator, science teacher and former CA parent, Gretchen Roorbach P’17 leads her Advanced Environmental Studies students into the woods to estimate the amount of CO2 stored in the trees there on Sep. 30, 2021.

Concord Academy’s sustainability plan is among the first of its kind from independent schools in the Northeast. When it was released in the spring of 2019, little did the world know that within a year a pandemic would upend life around the globe. While CA pivoted, progress toward the targets that had been outlined nevertheless continued. The plan outlines four major areas of focus for CA: institutional staffing support, reduction in greenhouse gas emissions, shifts to more sustainable dining and reducing food waste, and increasing the environmental sustainability of campus operations.

Rob Munro, dean of academic program and equity, has taken the lead on sustainability efforts at CA since he joined the senior administrative team in July 2020. He prioritized a process to work toward the school’s goals, gathering a committee, which is co-chaired by Don Kingman, direct of campus planning, design, and construction, to recalibrate plan targets in light of all of the impacts of COVID-19. Within the Community and Equity Office, science teacher Gretchen Roorbach P’17 has just been named the new environmental justice and sustainability coordinator for next year. And Munro has been working to establish infrastructure for a Green Revolving Fund to support future campus investments, including new building projects.

He’s hopeful that some portion of these funds earmarked for lessening CA’s environmental impact might in the future also be used to finance student-led sustainability initiatives. “The next big frontier is how we operationalize sustainability here at CA,” Munro says. “That’s going to involve building on the foundation we’ve started with faculty and staff and expanding to include students.”

Students haven’t had to wait to help CA with sustainability planning, though. Several have completed proposals for projects at CA, building on what they learned in the course Advanced Environmental Science: Energy and Climate taught by Roorbach as well as by Kiley Remiszewski in the fall. In February, a few had the opportunity to present their ideas to Concord Academy’s Board of Trustees. Lucy Whitelam ’22 and Tyler McGarry ’22 shared a plan for implementing solar panels into new construction, and Ishan Narra ’22 proposed installing fans over the basketball courts in the gym to reduce heating demand in the SHAC.

A student club has also been helping CA set a baseline for utility usage on campus to inform future plans for energy-saving measures. As the Big Data Club faculty advisor, George Larivee was approached in February by the Operations Department to see if club members could help to monitor water, electricity, and gas use in CA’s residential life houses. The Big Data Club has welcomed the challenge—though it has been one, as they’ve learned through getting involved in some of the intricacies of campus addresses for utility providers, meter sharing between buildings, and billing discrepancies.

“Real-world data gets messy,” Larivee says. “It’s a good challenge for students to get that experience working with more than the cleaned-up data sets they see in class.” He says they started with the houses because doing so was the most straightforward way to analyze the impact of the presence of students on energy usage—and to recommend changes that might correlate with human behavior.

Wheeler House, where Big Data Club co-head Nathan Dang ’23 lives, is the first house they’re working in, and there they’ve started monitoring the meters themselves. He says he had never realized how much could be measured from his own basement and that collecting data has been a new and worthwhile experience, along with conducting a simple analysis. The club plans to gather as much data from the houses as possible by the end of the year. Nathan anticipates the project could continue for years after he graduates, if it’s a benefit to the school.

“We felt this was the most meaningful project we considered, and the closest to us,” he says. “We were excited by the chance to really help not just our club but the school as well.”