On November 2, the CA Singers proudly represent Concord Academy and the school’s ties to the Concord Museum by performing at the grand opening of the museum’s new Anna and Neil Rasmussen Education Center. Their moving a capella renditions of “America the Beautiful” and “The Star-Spangled Banner” bookended the speaking program, with the closing national anthem bringing the guests to their feet. On an overcast fall day, the group of nine singers and director Tai Oney brought a cheerful touch of green into the light-filled space, whose design was influenced by both colonial architecture and the surrounding woods. 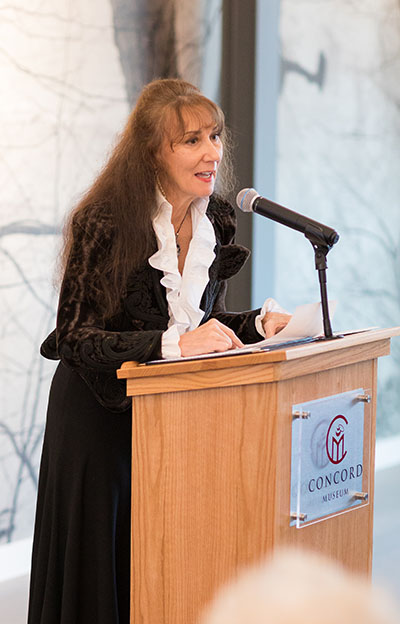 The celebration was historically informed, with the sounds of fife and drum and musket fire from Concord Minutemen. Anna Winter Rasmussen and Neil Rasmussen P’10 ’15 were in attendance, as were schoolchildren from Concord and Lowell, Mass., who donned tricorn hats, to assist with the ribbon cutting ceremony in the courtyard.

During the speaking program, dignitaries joined members of the Concord Museum administration and board of governors in honoring the Rasmussens for their leadership gift, and the more than 200 individual and family donors who joined them in making the new education center possible. Congresswoman Niki Tsongas spoke of the couple’s life’s work of preserving cultural sites that have defined America as a people and a country. Massachusetts State Senator Michael Barrett reflected on the importance of museums as some of America’s only remaining common ground and the vital role of historical education, and he read a resolution passed by the Massachusetts state house and senate paying tribute to the Rasmussen’s transformative history of giving. State Representative Cory Atkins likewise read a citation and commended the enshrinement of the idea of democracy in the new center.

Anna Winter Rasmussen, a member of the museum’s board of governors, spoke of historical study as a “lesson in perspective,” of how her family had chosen to live in Concord for more than 25 years because the echoes of its history add deep and thoughtful dimension to their lives. They gave their support to enable historical study in the new center, she said, where those echoes can become “multidimensional and alive.”

Concord Academy teachers have partnered with the Concord Museum, including a recent Digital History course, in which student worked with museum staff to develop interactive projects inspired by the museum’s special exhibition This Ever New Self: Thoreau and His Journal. Read more about that collaboration. 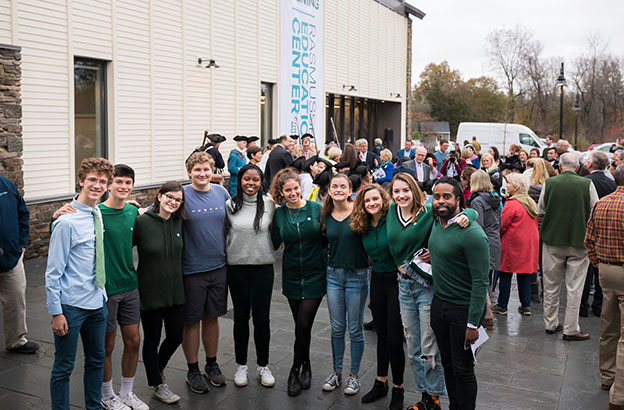 CA Singers with director Tai Oney at the Concord Museum. 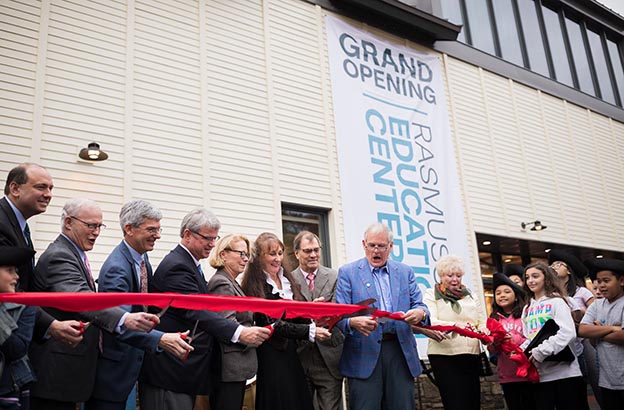 Anna and Neil Rasmussen P’10 ’15 at the ribbon-cutting ceremony.