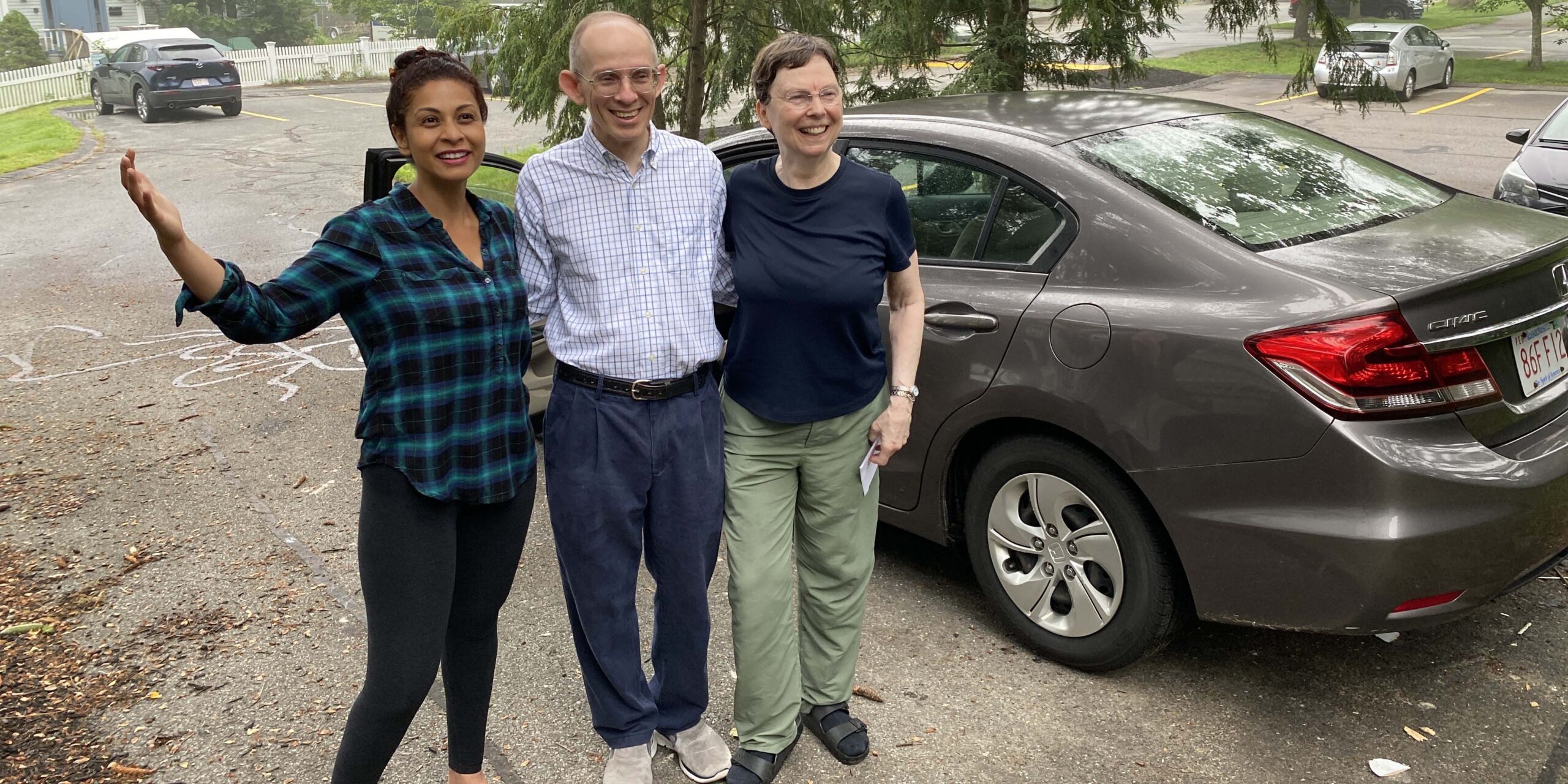 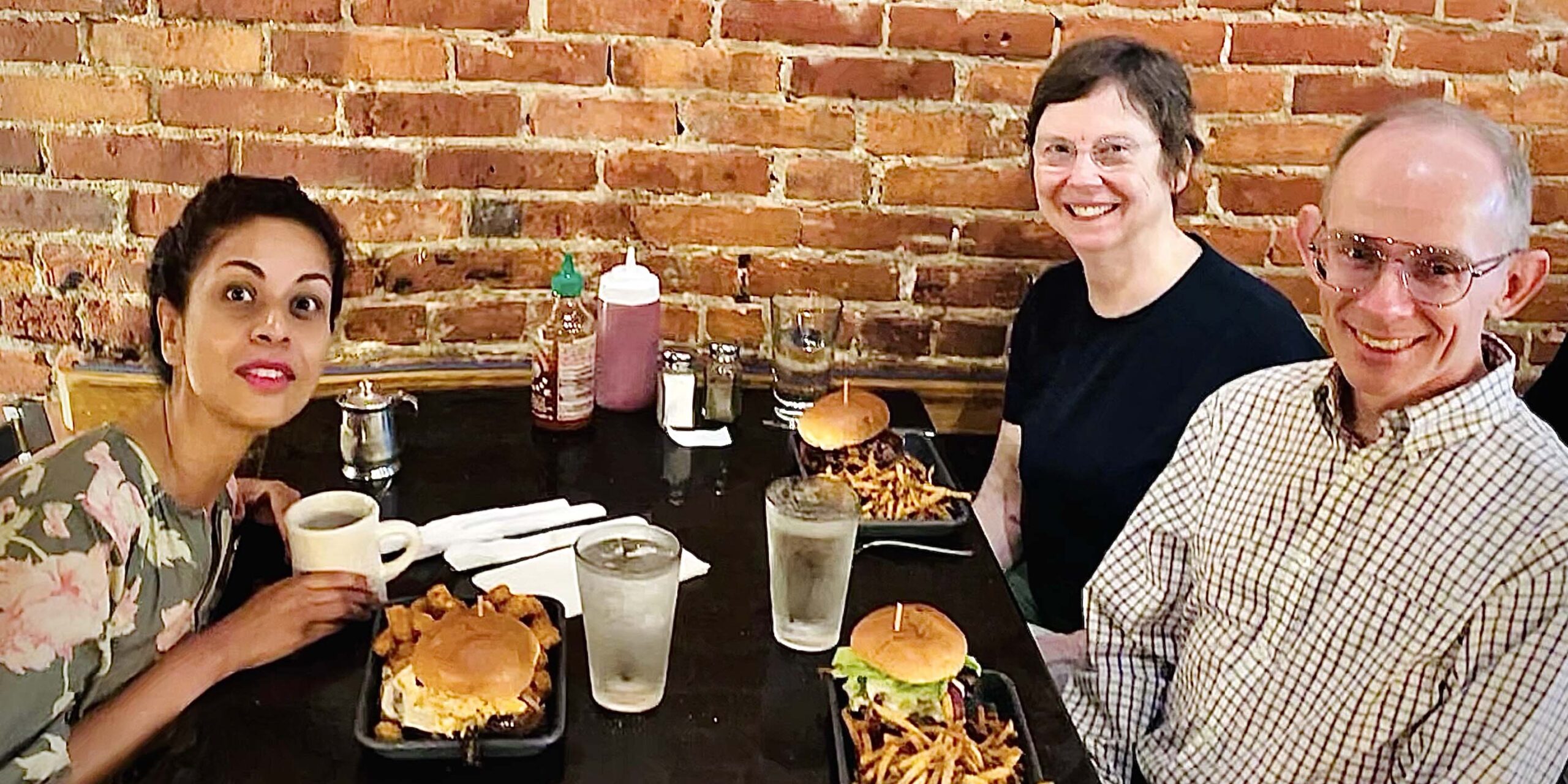 Sabrina Sadique, George Larivee, and Deborah Gray enjoying a meal together while on their road trip. 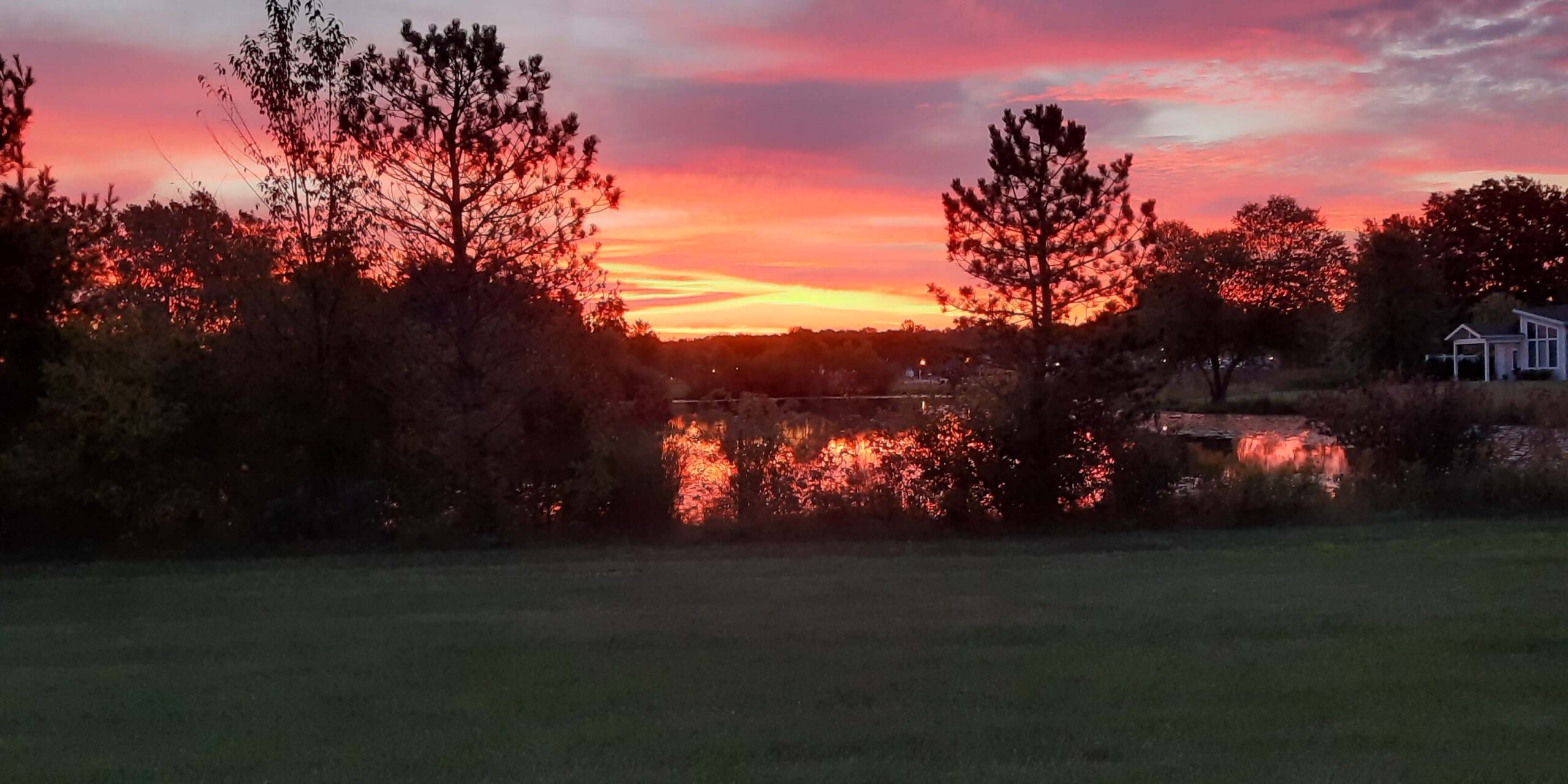 When Deborah Gray retired in June 2021 after more than 30 years at Concord Academy, as a math teacher and scheduler, a special send-off was in order. English teacher Sabrina Sadique didn’t hesitate to help her friend and fellow campus resident relocate to Ohio. There was just one thing she had to do first: learn how to drive.

Though she had always wanted to do so, Sadique says, “I just kept procrastinating.” This road trip provided the perfect opportunity for her to get behind the wheel. Sadique laughs as she recalls “aggressively learning to drive” during the spring alongside so many teenagers who had had to delay getting their license due to the pandemic.

Early one morning in July, with her learner’s permit in hand, Sadique met Gray and CA math teacher George Larivee on campus. Interim Head of School Sarah Yeh P’24 and their colleague Ben Stumpf ’88 saw the three of them off as they pulled out of the West Gate parking lot and headed off for the Midwest. “The trip out to Ohio was very smooth, and the company along the way made it thoroughly enjoyable,” Larivee says. The three spent the 12 hours in the car together playing word games and reminiscing.

Back in 1998, when Gray was the head of the Mathematics Department at CA, she was instrumental in hiring Larivee as a teacher. They later became neighbors on campus and good friends. Similarly, Sadique and Gray got to know each other over shared meals in the Stu-Fac. In fact, both of them had a habit of arriving at exactly 5:30 p.m., right when the dining hall opened for dinner. Larivee joined them often. “We’re introverts and quite private people,” says Gray. “While enjoying those delicious dinners (shout-out to CA’s amazing kitchen staff!), we could quietly explore our varied backgrounds, and in particular our shared interest in spirituality.” Larivee says it was those many meals on campus that “helped cement our bonds of friendship.”

Once the trio arrived at Kendal at Oberlin, a life plan community in the town of Gray’s alma mater, Larivee and Sadique helped her settle into her new home. They set up furniture, joined in greeting her new neighbors, and admired the natural beauty of the area—Gray’s cottage overlooks a pond surrounded by wildflowers on a campus with rabbits and deer. While in Ohio, Sadique and Larivee caught up with CA alumnae/i Keagan Tan ’20 and Elliot White ’19, who both study at Oberlin. Another highlight of the trip included a visit to the Allen Memorial Art Museum. In Larivee’s words, it was “a very pleasant stay.”

Sadique doesn’t know the next time the three of them will be in person together. She says she “savored every second” of the long car ride to Ohio and their stay in Oberlin. “If it wasn’t for the two of them, I don’t think I would have learned to drive,” she says. She has plans to complete the process of getting her license this fall: Her road test is scheduled in October.

Since retiring, Gray has been enjoying new adventures in Oberlin, though she still feels connected to CA. “One of the things I loved about teaching at CA was having so many talented and congenial colleagues,” Gray says. “I already miss them.”