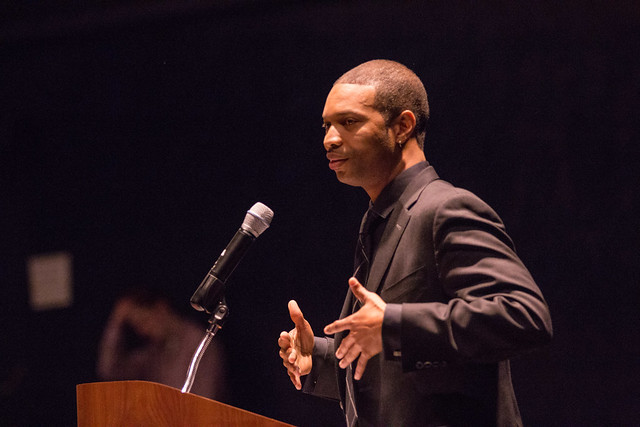 Boston’s Chief of Education, Rahn Dorsey ‘89, opened his assembly on Thursday, January 28, by reflecting on his time at Concord Academy. As for many alumnae/i who return as speakers, the view from stage was a little different. He recalled CA fondly for allowing him to confront challenges, cultivate a lifelong passion for learning, and form relationships that still anchor him today. “CA prepared me to be independent, and to be a contributor in all of the communities I’ve lived in since,” he said. Although while he was a boarding student at CA he had no idea what a chief of education might do, after 15 years in public policy research and community organizing in Michigan and Massachusetts, he joined Boston Mayor Martin J. Walsh’s Cabinet in 2014 and found himself in a role truly fit for him.

Working through public-private partnerships, with district, charter, and Catholic schools, Dorsey develops strategies for the city of Boston to support learning from the earliest stages — he is championing a push for universal pre-K — through higher education. There’s no set path for someone in his position to follow, but certain skills are necessary, such as a desire to explore diverse perspectives, comfort with ambiguity, a commitment to self-awareness, and the humility to responsibly represent others.

Dorsey discussed education as a critical policy space — a crucible where race, class, and culture all come into play in shaping students’ school trajectories, and their lives. “If you’re serious about being a mission-driven citizen, and making a difference, you’d be crazy not to get involved in education,” Dorsey said. It is inherently justice work, he stressed: “Policy uninformed by a sense of justice actually perpetuates inequity and [in education] underperformance.”

He didn’t claim that the work is straightforward. The national debate that pits district and charter schools against one another is especially contentious in Boston, where state funding follows students to either type of school. While fighting over resources, it’s all too easy for officials to forget that the resulting tribalism is not in young people’s best interests.

Dorsey clarified two terms often used interchangeably in debates about education: equality and equity. While proposals focusing on equality aim to ensure that everyone gets the same resources, equity-driven approaches apportion according to who needs the resources more. The difference boils down to sameness versus fairness. And make no mistake, said Dorsey, an equity agenda is the approach that keeps justice in mind.

For one example, he pointed to the longstanding systemic bias causing inequitable access to the highest level of rigor in the Boston Public Schools system. Eighty percent of boys in the elementary grades are Black or Hispanic, but only 48 percent of students in Advanced Work, the gifted-and-talented program, are boys of color. And for students who aren’t in Advanced Work, there’s only a slim chance of moving on to an exam school, or to college. While Dorsey would like to abolish the system of testing third-graders — essentially taking some off-track for college — and eliminate the Advanced Work program, the issue is thorny because it involves eliminating exclusivity and a valued option for the students in the program. “To get to equity, you have to renegotiate privilege,” said Dorsey. “We all have to give a little to make sure that everyone gets what they need to thrive.”

Dorsey drew a distinction between mobilizing (being vocal in framing and deliberating public challenges) and organizing (actively working with others to create alternatives). For Dorsey, the appeal of organizing at the local level is participatory democracy: sitting down with individuals and working across sectors to recruit teachers of color or take steps to counter disproportionate discipline. He stressed the importance of organizing “beyond education” to address the intergenerational poverty that has been entrenched in the U.S. for more than 50 years, and the need for gainful employment, stable housing, food security, and access to social services — the whole of a student’s situation, not just the parts of the day spent in a school building. The measure of success, said Dorsey, should be whether learning time was maximized for every student.

For students at CA, getting involved needn’t be heroic, Dorsey said. Communities need purpose– and mission-driven individuals more than ever, and people who will become “transparent and honest leaders.” He urged students “to build awareness, sensitivity, and empathy, to have active exchanges about values, and wrestle with competing visions for justice.”

Noting that Boston has the highest income inequality of any city in the U.S., he challenged students to recognize that equity is at the core of policy debates, and to cultivate a lifelong habit of contributing to their communities. “It’s not enough to be vocal,” said Dorsey. “You have to be active. Don’t just talk about the thing that bothers you the most — be about it.”