Unlike other educational institutions, museums inspire public trust across the political spectrum. What responsibilities do they have in return?

Museums may be more important than ever. Not only has their number doubled in the United States over the past few decades, but at a time when bias so often overpowers facts, an overwhelming majority of Americans trust museums as sources of credible information. That’s in striking contrast to the nearly two-thirds of Americans, according to the Pew Research Center, who think the country’s higher education system is headed in the wrong direction. Americans see so much value in museums that almost all — from 93 to 97 percent across political affiliations, according to the American Alliance of Museums — want their tax dollars to support them. Why are these institutions so widely endorsed, and what are their obligations, given that trust?

Betty Mugar Eveillard ’65, chair of the board of trustees of the Frick Collection in New York, sees many reasons museums continue to inspire confidence. Foremost is authenticity. Eveillard loved museums even as a child and recalls the powerful experience of seeing in person the master works she’d known from books. “I see that awe in visitors to the Frick,” she says. “They’re looking at the history of human effort and the human search for beauty.” Eveillard is also a trustee of the Kress Foundation, which carries out the vision of Samuel Kress, one of the founding benefactors of the National Gallery of Art. A collector of drawings who worked as an investment banker on Wall Street, Eveillard sees collector museums as unique institutions created from individual wealth and individual taste — private treasures transformed into public gifts.

Elizabeth Smith ’75, who spent her curatorial career in contemporary art museums and now leads the Helen Frankenthaler Foundation, says objectivity is critical to museums’ credibility. “People go expecting they will have experiences that have been shaped by expert, informed decisions in contexts free from conflicts of interest,” she adds.

That’s not to say museums are free from controversy. “We’re seeing a lot of institutional critique these days throughout our culture, and arts organizations are not immune,” Smith says. She cites protest over cultural appropriation at the Whitney Biennial in 2017 in response to the artist Dana Schutz’s paintings of Emmett Till’s open coffin. “But museums have unique opportunities to engage all the thorny issues,” Smith says. “It’s what they’re set up to do.”

Contemporary art museums fill that role particularly well in partnership with artists. When Smith was chief curator at the Museum of Contemporary Art Chicago, the British artist Jeremy Deller brought in the bombed shell of a car from Iraq to start conversations about the Iraq War between audiences and experts of many kinds. “It was a brilliant use of an object as a basis for discourse and a great example of how museums perform a public service,” Smith says.

“Peace, and a little social awareness” are what Carey Mack Weber ’79, director of the Fairfield University Art Museum in Connecticut, says people seek at museums. Their integrity, in her view, rests heavily on museum educators. “Their programs are carefully crafted and engaging,” she says. “In the relationship between the public and the art, they’re intermediaries with an amazing personal touch.”

Weber has been closely following the Museums Are Not Neutral movement, which is sparking debate at museum conferences. “While we want to preserve public trust, museums have never been and can’t be neutral,” she says.

She recently challenged audiences with an exhibition about guns. “We’re able to do things that you can’t see at a major art museum,” she says. The show was well-received, and around 350 visitors attended a panel discussion about gun violence. “It was an amazing turnout,” Weber says. “To have that many be part of the conversation — we made a difference.” Paul Villinski, “Epitaph,” from the show #UNLOAD: Guns in the Hands of Artists, at the Fairfield University Museum. Each piece in the exhibition was created using decommissioned guns, taken off the streets of New Orleans via the city’s gun buyback program, and distributed to internationally-known painters, glass artists, sculptors, photographers, video artists, poets, and other artists.

Weber sees many ways for museums to engage with topical art being made today. “We create a space where people can have important conversations,” she says. “Museums have the potential to be places where positive change can happen.”

While some museum leaders espouse institutional objectivity, others question whether neutrality is even possible. As to whether it’s desirable, public opinion offers some guidance. A 2017 National Awareness, Attitudes, and Usage study conducted by IMPACTS Research & Development showed that approximately 78 percent of Americans consider museums highly credible sources of information, 11 percentage points higher than newspapers and 27 percentage points higher than federal agencies. Nearly as many — roughly 74 percent — believe museums should recommend action. That’s not necessarily a call to politicization, but as museums are both believed and looked to for direction, what are their responsibilities?

For anthropology museums, presenting diverse perspectives is a guiding rationale. Polly Hubbard ’83, the director of K–12 education with the Peabody Museum of Archeology and Ethnology and the Harvard Semitic Museum, both part of the Harvard Museums of Science and Culture, develops school programs, curricula, and visitor experiences. She is working, for example, with African and Caribbean teens from a Somerville, Mass., photography club to gauge their responses to a planned exhibit of the first photographic images of enslaved people in America.

Most of the learners Hubbard engages are young. “Valuing curiosity and continual questioning — that’s what we try to model for kids,” she says.

To enhance the Peabody’s Native American exhibits, she recently partnered with the Harvard University Native American Program and invited a predominantly native review committee to curate an audio playlist of poems read by their indigenous authors. “I wanted poetry by contemporary writers to help people experience something more emotional, to have a different kind of conversation with the history in this space,” Hubbard says. She was heartened by visitors’ responses. “People stayed longer, they looked more carefully,” she said. “It brought people to a much more complex and complicated understanding about contemporary Native American experiences.”

Hubbard points out that since 1990, museums have been subject to the Native American Graves Protection and Repatriation Act and are thus not neutral places but rather sites of negotiation with native communities. By watching the Peabody’s repatriation department, which works directly with native nations to return or arrange continued care for culturally important objects, Hubbard has learned a great deal about indigenous people’s feelings for museums. “They range from anger and grief to respect and gratefulness that the objects have been conserved and cared for,” she says. Archeology and history museums have been engaging in this politicized conversation for 30 years, adding to their knowledge about their collections and also adjusting their storage practices. At the Peabody, special handling instructions now indicate who may touch certain items, for example, or what direction objects must face, to honor native understandings of artifacts as living things.

Hubbard thinks it’s precisely by presenting multiple voices — by being places, she says, “where you don’t get assaulted with an opinion” — that museums earn their authority. Merrill Mason ’67, who directs the American Philosophical Society (APS) Museum in Philadelphia, says the meaning of public trust is changing. “In the hallowed halls built at the turn of the century, you knew you were supposed to go in without talking or touching,” she says. “Now people are challenging that expectation. But our responsibility remains the same: telling the truth as shown in historical documents.”

A cultural shift reshaped the APS, once an exclusive society, leading to the creation of the museum in 2001 and a curatorial training program in 2013. “There’s been more interest in opening up the APS’s treasures to the public,” Mason says of the collection, which includes Thomas Jefferson’s handwritten draft of the Declaration of Independence and a moon-landing transcript annotated by Neil Armstrong.

Mason hasn’t shied away from contentious topics. Prior to a 2010 exhibition on Charles Darwin, she learned from a Pew Research Center poll that around 40 percent of Americans don’t believe in evolution. Visitors were invited to comment on the exhibition, which presented other theories of life from Darwin’s time and his correspondence following his Beagle voyage. “It was pretty amazing some of the things people wrote,” Mason says. “One child posted, ‘If my parents knew I was here, they’d kill me.’”

While such reactions testify to how polarized America is, Mason grounds her approach in founder Benjamin Franklin’s desire for the APS to promote useful knowledge. “And useful knowledge,” she says, “is fact-based.” Visitors to the APS Jefferson, Science, and Explorationexhibition. Every exhibition is designed to appeal to different types of learners.

In Massachusetts, the Concord Museum’s commitment to primary materials and living history inspired Anna Winter Rasmussen and Neil Rasmussen P’10 ’15 to make a leadership gift in support of education. “Especially today, when no one seems to be able to argue based on facts, it’s very important to have a common understanding of our past that will allow us to agree on the future,” Neil says.

“It’s critical now to do what we can to augment our academic institutions,” adds Anna, who has been involved with the Concord Museum since 1992 and has served on its board of governors since 2000. “People don’t perceive bias as readily in museums as they do in classrooms, too often attributing subjectivity to a teacher’s personality or motivation. Museums are positioned to place true and tangible materials before your eyes — and often in your hands.”

In the Concord Museum’s new Anna and Neil Rasmussen Education Center, school groups from Lawrence and Lowell, Mass., grind herbs with a mortar and pestle in the historical kitchen; they pretend to be British soldiers, colonists, or enslaved people, then reverse their roles.

While the Rasmussens are concerned with preserving the rare and profound level of public agreement on the value of museums, they acknowledge times have changed these institutions of knowledge for the better. “They’re actually more factual and neutral than ever,” Neil says, recalling exhibits from his childhood that glorified Christopher Columbus. “Now we put a spotlight on the mistakes that were in our textbooks.”

They celebrate the Concord Museum’s commitment to challenging simplistic narratives, which is also a promise not to vilify any perspective. “What museums teach is knowledge, insight, tolerance, and understanding,” Anna says. “This is us — all our beautiful and not-so-beautiful sides.”

This semester, one CA history class learned firsthand about what it takes to create a compelling museum exhibition, working closely with the staff of the Concord Museum leading up to their own public gallery talks. Read more and see photos. 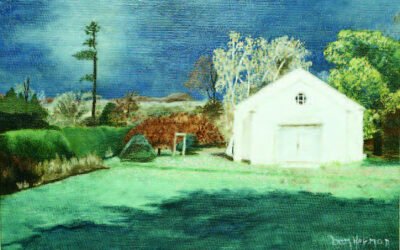 On April 22, 2022—Concord Academy’s 100th birthday—the CA community will bestow the Centennial Joan Shaw Herman Distinguished Service Award. This award was first given to Joan Shaw Herman ’46 herself, posthumously, in 1976. Herman, who was paralyzed after contracting polio the summer after her graduation from CA, worked to improve the lives of other individuals with physical disabilities. Her story speaks to the power that resilience, generosity, and an enduring desire to make life better for others can have, and why this award is so important at Concord Academy. 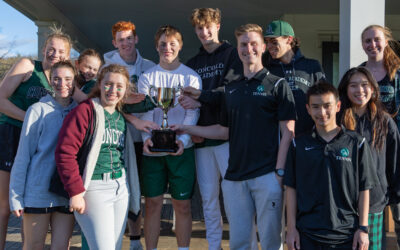 On Friday, April 29, CA hosted Bancroft in the CA/Bancroft Cup on a cool and sunny afternoon. The inaugural rivalry event included games across six sports with the winner of four contests or more earning the right to “take home” the coveted trophy. With CA earning the needed four wins to capture the Cup, following a short trophy presentation on the fieldhouse deck, the CA captains hoisted the Cup in celebration! 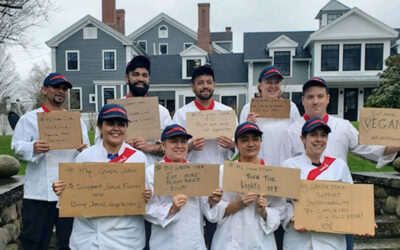 Food systems can sometimes be overlooked when it comes to assessing our impact on the planet, but they’re the focus of one of three working groups established by Concord Academy’s Sustainability Plan, which the school adopted in 2019. The dining hall team has been making significant strides toward sustainable food system goals, especially in sourcing local ingredients and promoting plant-forward menus.