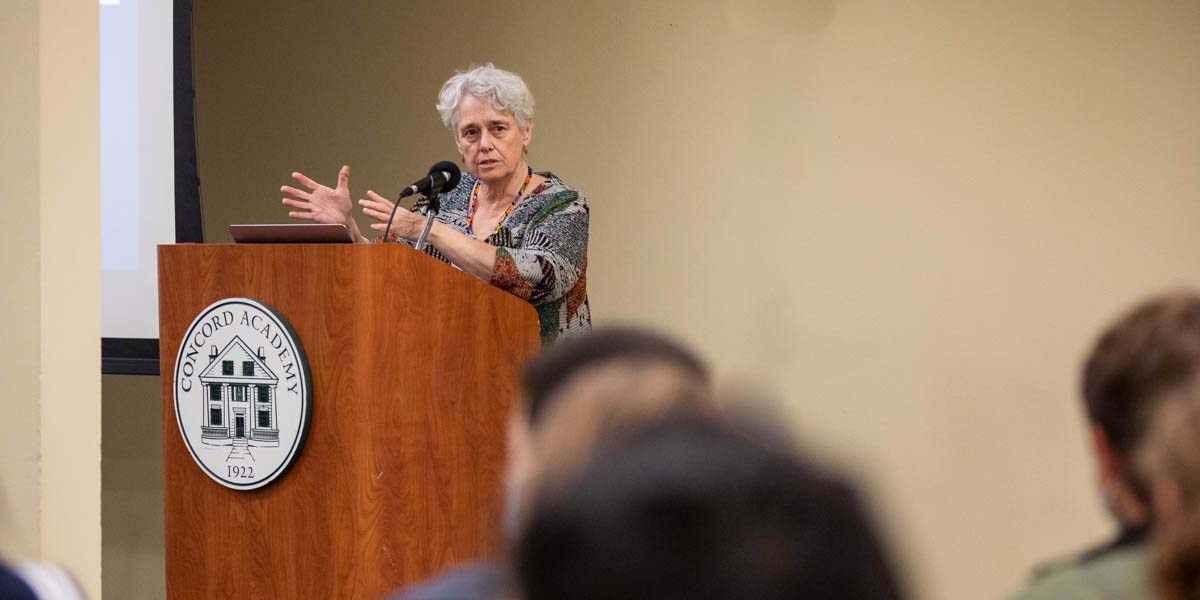 Throughout her professional and academic career, physician Leslie Davidson ’66 has focused on meeting communities’ needs. “You have to be linked to the population of the community you are serving,” Davison said during a talk she gave at Concord Academy on November 12. “Working in teams is essential.” A professor of epidemiology and pediatrics at Columbia University Medical Center, Davidson received the 2021 Joan Shaw Herman Award for Distinguished Service, together with Ingrid Walker-Descartes. After hosting the honorees virtually in June for a presentation to alumnae/i, CA welcomed Davidson back to campus this fall to engage with students. (Walker-Descartes will visit later this year.)

During her visit, Davidson attended classes, toured campus, and met with students, faculty, and staff. As an alumna, Davidson was excited to observe new approaches to pedagogy in classrooms—students conversing with one another, learning from one another as well as from the teacher. She said she thoroughly enjoyed her observations of Andrew Stephen’s English course Monsters in Literature, as well as Emma Storebeck’s history class US: Gender. All students were invited to join Davidson in the afternoon for a conversation about her work and service in the fields of medicine and public health.

Describing her career to students, Davidson said, “I wanted one foot in the academy and one foot in the community.” After finishing medical school, earning a master’s in epidemiology, and completing a post-doctorate in child psychiatry, she began a job leading the Central Harlem School Health Program serving over 11,000 children. With the head of pediatric surgery, she developed the Harlem Hospital Injury Prevention Program. They originally conceptualized the program as an effort to stop rising gunshot wounds in children, but after surveying the community, they realized there was a real need and desire for safe play spaces for neighborhood children.

Davidson emphasized the importance of engaging community members from the start of public health programs, because community desires can shift the goals of these programs for better public health outcomes. She also spoke about “breaking down the barriers” of what we consider public health. Transforming cafeterias into art studios for children and implementing little leagues in Harlem, while not traditionally thought of as public health measures, did indeed have a positive impact on children’s health—as evidenced by the lowered rate of childhood injuries Davidson documented with funding from the Centers for Disease Control’s New Injury Program.

In the Q&A session following Davidson’s presentation, Jared Rhee ’22 asked her what social justice training she received when becoming a medical professional. Davidson replied that at the time she was in medical school, that type of training didn’t exist. She noted that there is some social justice training for medical students now and pointed to Columbia University’s Self, Social, and Global Awareness (SSGA) series. As a professor, she now tries to tie social justice work into her teaching as much as possible.

Esmée Decola ’23 asked Davidson how we can reconceptualize what structures play a role in health. Esmée pointed to lack of access to public transportation and food as negatively impacting health, and how reframing these issues as health crises could encourage more immediacy in addressing them. Davidson agreed and emphasized the importance of incorporating Kimberlé Crenshaw’s concept of intersectionality to bring change. This means focusing on all aspects of people’s identities—including race, gender, and sexual orientation—and the way they interact with one another, in regard to improving public health.

Davidson said that young people, including CA students, give her hope for a more equitable future for public health. Pointing appreciatively to CA students’ engagement in activism, she advised students “ask for what you want” and to “not be passive” when it comes to making change. “You have a more open mind about many things and a commitment to make them better,” she said. “I have hope.”

Leslie Davidson ’66 has devoted her life to researching disabilities in children, international child health, screening, epidemiology, and prevention of accidents and violence, particularly intimate partner violence. She has worked on an international team that developed an efficient approach to screen children for disabilities in developing countries and, for five years, led the Central Harlem School Health Program, launching childhood injury surveillance in Northern Manhattan linked to the development and evaluation of the Harlem Hospital Injury Prevention Program. Davidson moved to England in 1992 to work in the National Health Service as a pediatric epidemiologist and served as senior lecturer in pediatric epidemiology and public health at King’s College, London. In 1997, she became director of the National Pediatric Epidemiology Unit at Oxford. She returned to Columbia’s Mailman School in 2002 as chair of the Heilbrunn Department of Population and Family Health. She is a senior member of the Department of Epidemiology, director of the newly emerging Center for Child and Family Life Epidemiology, senior health advisor to Project THRIVE of the National Center for Children in Poverty, and director of the dating violence program of the Center for the Prevention of Youth Violence.