After joining CA’s board in fall 2009, Williams served as its president from 2013 to 2018. Her five years in that role will be remembered, Head of School Rick Hardy said in a speech in October honoring her, as “a time of extraordinary progress for the school, a time when CA challenged itself to reach higher, and never to be complacent about its progress.”

Current Board of Trustees President Fay Shutzer ’65 celebrated Williams for the “remarkable and unprecedented” momentum she generated for CA. Not only did Williams preside over the completion of the CA Labs science center, but she also championed the CA Houses initiative, whose culmination in the dedication of the William M. Bailey Commons was being celebrated. 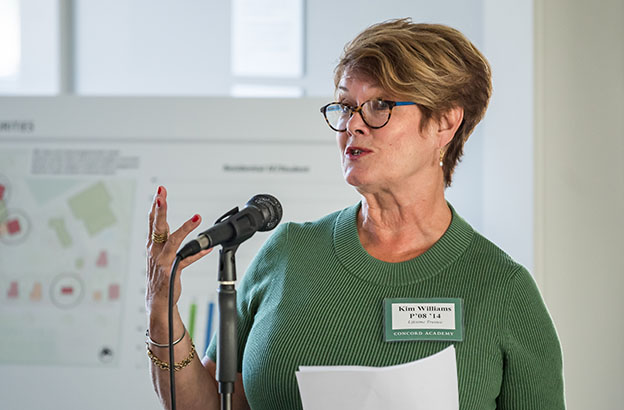 Having spent the majority of her professional career in investment management and retired in 2005 as senior vice-president and partner of Boston-based Wellington Management, Williams remains a vocal advocate for women in business. In April 2018, Williams delivered that year’s Davidson Lecture at Concord Academy on that topic.

Williams lives in Newbury, Mass., with her husband, Trevor Miller. They are the proud parents of Alexander ’08, Ben ’14, and Rebecca ’14.